It’s been a while since we looked at Japan’s debt situation. Here is the dire update.

Japan’s national debt totaled a record-high ¥1.02 quadrillion as of the end of March, up ¥33.36 trillion from a year earlier, the Finance Ministry said.

The central government debt, which increased ¥7.01 trillion from the end of December last year, kept rising mainly due to ballooning social security costs in line with the aging of the population.

The balance of government bonds, financing bills and other borrowing crossed the ¥1 quadrillion line for the first time ever at the end of June 2013.

The national debt stood at ¥8.06 million per capita, based on an estimated population of 127.14 million as of April 1.

But fiscal investment and loan program bonds, used to raise funds for loans to government affiliates, decreased ¥5.05 trillion to ¥104.21 trillion.

So Japan’s debt grew by 7 trillion in one quarter? Sure, why not. Here’s why: presenting the Bank of Japan’s balance sheet. 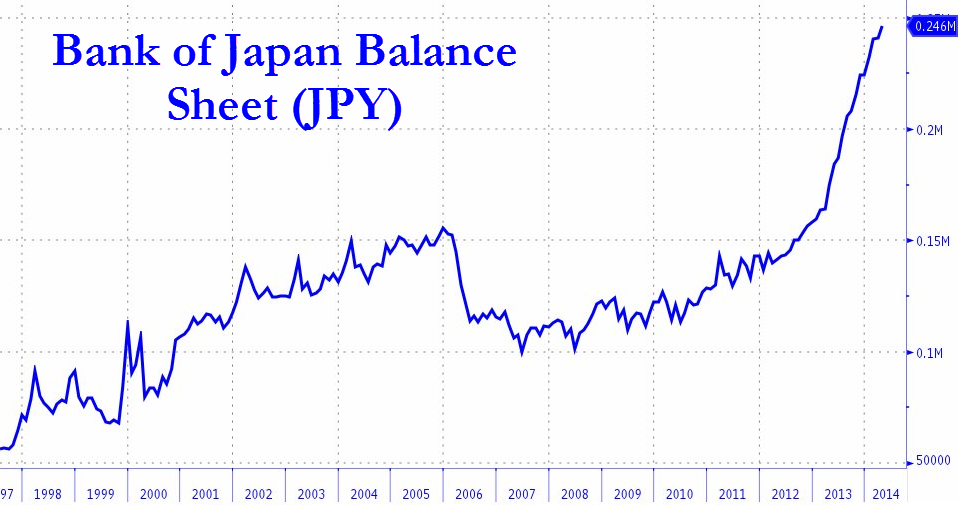 Perfectly “New”, and quite sustainable, Normal.