It fits the pattern of gratuitous bank enrichment perfectly, but this time, the big beneficiaries of the Fed are foreign banks. A JPMorgan analysis, cited by the Wall Street Journal, figured that in 2014 the Fed would pay $6.74 billion in interest to the banks that park their excess cash at the Fed – half of that amount, so a cool $3.37 billion, would line the pockets of foreign banks with branches in the US.

But the total balance was $2.66 trillion in April, up from $2.62 trillion in March and from $1.83 trillion a year ago. The balances in excess of the “penalty-free band” have reached $2.57 trillion. The highest ever. The penalty on that?

Forget that. The Fed’s raison d’être is to enrich the banks regardless of what the costs to the economy, the rest of society, and savers. So instead of penalizing banks for these excess reserves, it pays the banks 0.25% interest not only on the required balances but also on all other balances. Spread over the year 2014, as JPMorgan estimated, interest payments on these balances would amount to $6.74 billion.

It’s a marvelous system. The banks’ cost of funds, given the heroic efforts the Fed has undertaken to repress interest rates, is near zero. Banks can borrow short-term from their depositors – that’s you and me – and from money-market funds – that’s you and me again – at near zero cost, so maybe 0.10%. Instead of lending it out, banks put that money on deposit at the Fed to earn 0.25%. It’s the laziest no-brainer in banking history. A pure gift from the Fed.

But there’s a kink. Non-US-charted banks with branches in the US benefit even more. The Bank for International Settlements, the umbrella organization for the world’s largest central banks, revealed how these non-US banks were taking advantage of the new FDIC insurance charges on wholesale funding (borrowing from other banks, short-term repos, or funding from affiliates outside the US). They’d figured out that these extra costs didn’t apply to them. They only applied to US-chartered banks.

The wider FDIC charge added 2.5 to 45 basis points to the costs of large and complex US chartered banks’ short-term wholesale funding. The calculation is complex and its result by bank is not disclosed, but the rate for the largest US bank was said to be 8 basis points…. With wholesale rates of 10 basis points or less, the new FDIC charge made bidding for such funds and parking them at the Fed at 25 basis points unattractive for many US-chartered banks but not to the US branches of foreign banks, which pay no FDIC fee.

These “seemingly small regulatory differences” at the FDIC, the report points out, turned the Fed into a special profit center for non-US banks. In this chart from the report, foreign banks’ balances parked at the Fed (blue area in dollars, and red line in percent) started shooting up at the end of 2008, and by mid-2013, reached about 50%. It resulted in “massive changes” in the balance sheets of internationally active banks. 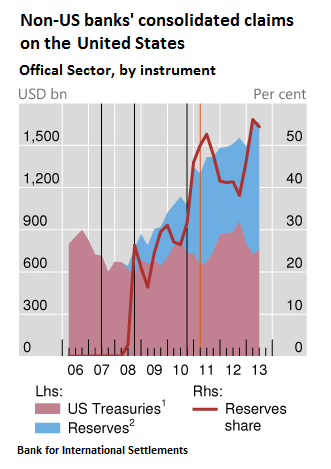 As foreign banks took advantage of the laziest no-brainer in history, the Fed’s money-printing and bond buying regime led to an enormous inflow of money into the US – about $1.3 trillion so far. It’s the risk-free banking version of the hot money. And the $2.6 trillion in excess reserves that economists are expecting to flow into the US economy sooner or later to really stir things up? Half of it is that hot money. It won’t ever flow into the US economy. It won’t fuel the “escape velocity” that has been forecast for five years in a row. It’ll dissipate.

The Fed has an excuse for this banking gravy train: “eliminate effectively the implicit tax that reserve requirements used to impose on depository institutions,” it says. OK, I get it, concerning the “penalty-free” $80.2 billion that banks are required to deposit at the Fed. Fine. Pay them 0.25% on that. I don’t get paid that much on my money at the bank. But what the heck. Let’s not quibble over pocket change, which is what billions have become to these megabanks. But what about the annual interest on $2.6 trillion in excess reserves?

Ah, the Fed has an excuse for that too: it’s of course – I mean, how could I possibly not think of this on my own? – “an additional tool for the conduct of monetary policy.” A policy whose goal it is to fan reckless speculation, inflate asset bubbles, enrich the banks and those who run them at the expense of savers, and douse the entire neighborhood, namely Wall Street, with free money.

Under this relentless regime, the labor force participation rate has shriveled to 62.8%. You have to go back to February 1978 to see worse. It’s a terrible indictment of the Fed’s policies that favor capital over labor, Wall Street over savers. New Zealand’s central bank didn’t follow the Fed’s lead in monetary policy. And there, the labor participation rate just set a new record high. Read…. Scorched-Earth Monetary Policy in the US, And What Happened in New Zealand