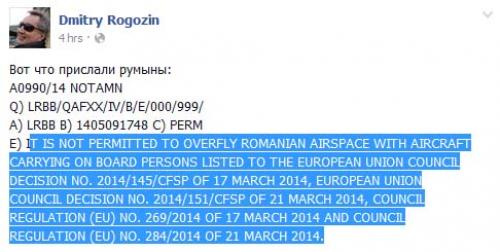 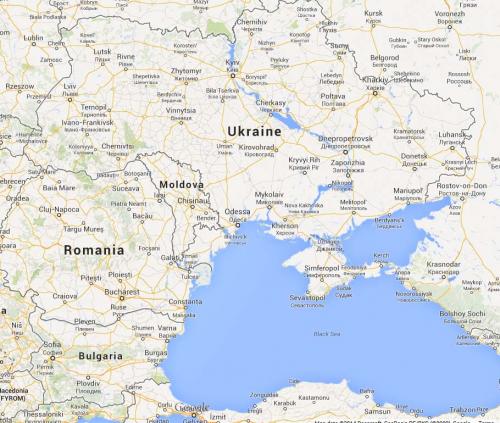 So what does Rogozin do? Precisely what the outspoken member of the US counter-Russia sanctions list would be expected to do:

I’m flying out despite the ban

Sadly for him, it did not work out quite as expected: Ukrainian interceptors turned around our plane http://t.co/Khudl8Goho

Here is a map showing the moment when the Russian Yak was met by Ukraine Migs: 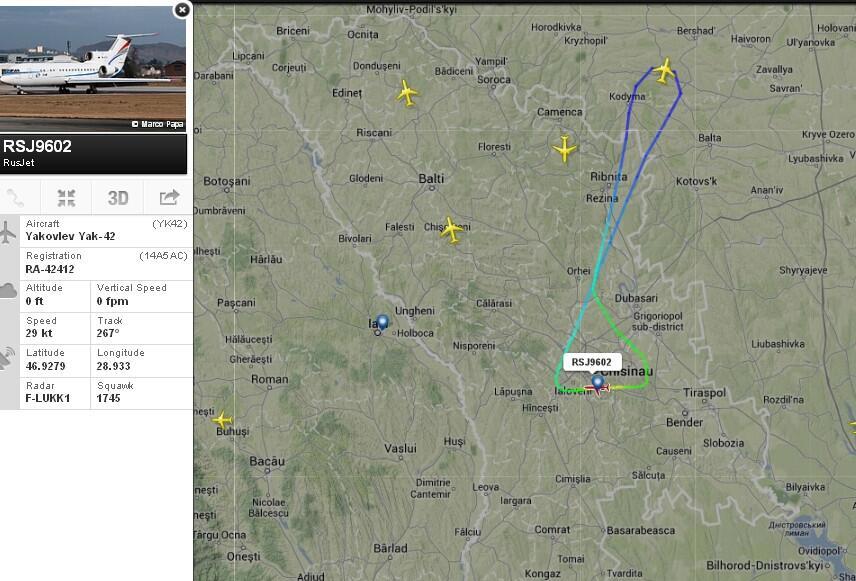 This is how the Moldovan website Actualiti described the incident:

Aircraft of Vice Premier of the Russian Federation Dmitry Rogozin was intercepted by a Ukrainian MiG after he entered the airspace of Ukraine, reports Actualiti.md

Earlier, the Deputy Prime Minister said that he would still fly to Moscow via Ukraine.

“I am taking off despite the ban,” – wrote Rogozin in social networks.

Rogozin flew on board the Yak -42 (aka RUS-Jet) from Chisinau airport.

Actualitati.md recalls that Ukraine refused to allow its airspace to Russian officials. To Dmitry Rogozin, May 8 was in Tiraspol, the board was forced to fly through Bulgaria and Romania.

The Vice PM was not the only one who was forced to return. According to Gazeta.ru, Ukraine also intercepted the flight of the Russian culture minister Vladimir Medinsky.

Ukrainian authorities have blocked and did not allow passage through its airspace the plane on which was the Russian delegation headed by the Minister of Culture of Russia Vladimir Medinsky which was returning from Chisinau to Moscow, according to the minister’s Twitter account.

“Our aircraft with the Russian delegation was ordered to return to Chisinau , threatened by a forced landing in Ukraine ” – said Medinsky.

The minister said that Ukraine previously allowed overflights . In Bawtry is on the State Duma delegation includes , Ministry of Foreign Affairs and the Government.

However, before Ukraine pats itself on the back for its success in keeping the Russians landlocked, Rogozin sent out the following tweet supposedly next to Moscow’s airport Domodedovo, where he praised the efficiency of the Russian “Military-Industrial commission” in finding alternative paths:

Of course, had this little incident escalated and the Russian’s plane had been shot down, something tells us those who were furiously selling VIX on Friday afternoon to paint the tape with a record Dow Jones high, would be in a bit of a pickle coming Monday.

Still, while this incident was contained, the big one remains: tomorrow’s referendum which is still going ahead as planned and following which it is only a matter of time before East Ukraine, now independent, requests Russian “peacekeepers” to enter the country and, well, keep the peace.