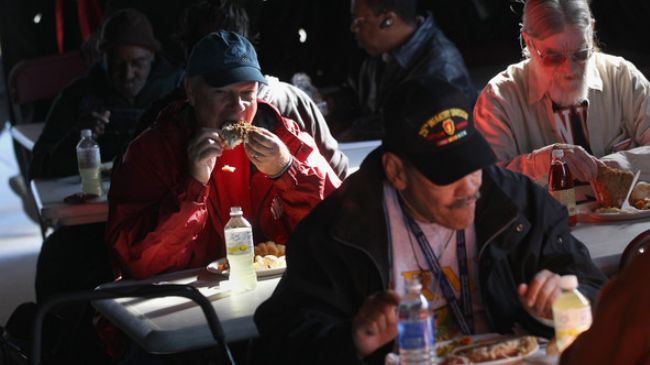 More than a quarter of US veterans from the wars in Iraq and Afghanistan have difficulty getting enough food, almost double the food insecurity rate in the general population, according to new research.

Researchers from the University of Minnesota and the Minneapolis Department of Veterans Affairs surveyed 922 US veterans and found that 27 percent reported not having access to enough food for three meals a day.

“We found that 27 percent of veterans who served in the wars in Iraq and Afghanistan don’t have consistent access to sufficient food,” study leader Rachel Widome from the University of Minnesota, said in a university news release.

“That’s drastically higher than the prevalence of food insecurity in the US, which is 14.5 percent,” she noted. Widome called the findings “shocking and disheartening.”

“We really had no idea how common it was that Iraq and Afghanistan war veterans were struggling to afford food. Given anecdotal accounts, I thought food insecurity might be somewhat of an issue, but really had no idea of the extent.”

About 12 percent of the veterans surveyed were classified as having “very low food security,” marking severe difficulties in getting sufficient food.

In addition, food-insecure veterans are also more likely to be alcoholic, use tobacco, get less sleep and be unemployed than those who have enough food, according to the study published May 7 in the journal Public Health Nutrition.

Since 2003, suicide among active-duty members of the military and veterans has soared to record levels. An estimated 22 veterans killed themselves each day in 2010, compared with 18 per day in 2007, according to the latest figures available from the Department of Veterans Affairs.

3 thoughts on “Study: 27% Of US Veterans From Iraq, Afghan Wars Going Hungry”