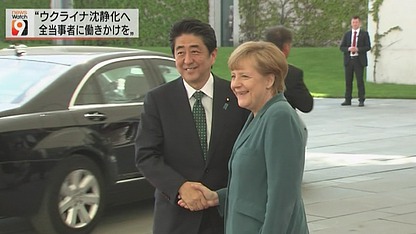 Japanese Prime Minister Shinzo Abe and German Chancellor Angela Merkel have agreed that their countries will work together to resolve the crisis in Ukraine.

The 2 leaders held an hour-long summit meeting and joint news conference on Wednesday in Berlin. Germany is the first stop on Abe’s European tour.

Prime Minister Abe said he had very significant talks with Chancellor Merkel. He said they discussed Ukraine and bilateral cooperation in security, economic and social fields, as well as human and intellectual exchanges.

The Japanese prime minister said the 2 leaders agreed to call on all parties involved in Ukraine to make efforts to defuse the crisis. Abe said Japan and Germany will work together to resolve the issue.

Abe added that they had also agreed to urge Russia to play a responsible role in the international community.

The prime minister noted that Japan will provide emergency support of 300,000 euros, or about 415,000 dollars, to the Council of Europe. These funds are intended to help stabilize the situation in Ukraine, in addition to the aid of 1.5 billion dollars already announced.

Abe said his administration also decided to offer 500,000 euros, or about 690,000 dollars, to international monitors sent to Ukraine from the Organization for Security and Cooperation in Europe.