Looks like the elitists (Rothschilds etc.) really want to start another world war.

Yesterday, we jokingly noted that with separatists blockading Slavyansk from a Ukraine special-forces invasion, and with the Ukraine army blockading Slavyansk from said separatists (unclear exactly why), that the east Ukraine city of Slavyansk is easily the most blocked city in the world (and in dire need of fiber). However, based on just released satellite imagery showing the build up of Ukraine forces around Slavyansk – a city which as a reminder is located in Ukraine – what is going on around Slavyansk is no laughing matter.

Russian RIA Novosti reports that it has received satellite photos, “which clearly show the accumulation of a large number of Ukrainian military equipment and weapons on the border with the Russian Federation and in the vicinity of Slavyasnk.” RIA cites a source in the Russian Defense Ministry, who commented that the pictures show a military formation designed “to wipe out the city and all its inhabitants from the face of the earth.”

According to source, the group has more than 15,000 troops from the Ukraine army and national guard, about 160 tanks, 230 infantry fighting vehicles and APCs, and as much as 150 mortars, howitzers and multiple launch rocket systems (“Grad” and “Smerch”).

The source concludes that “This concentration of troops in one area is not compatible with the potential of self-defense forces, armed with only a small number of pistols and submachine guns.”

The satellite images are below: 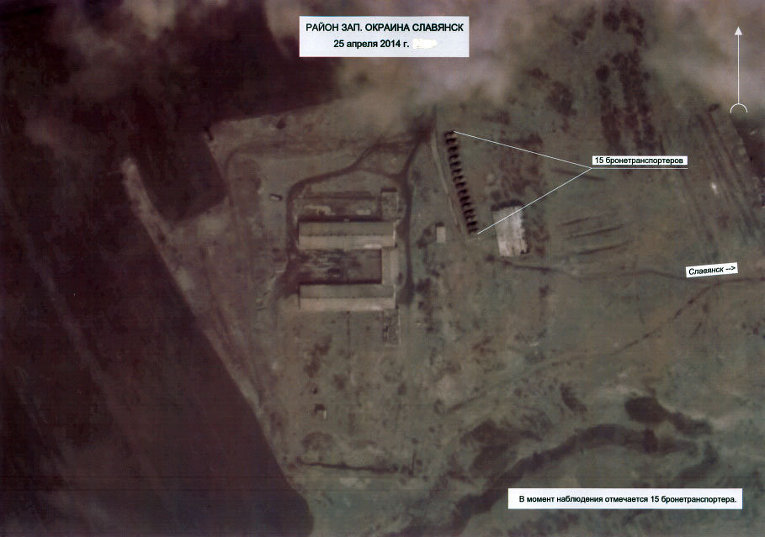 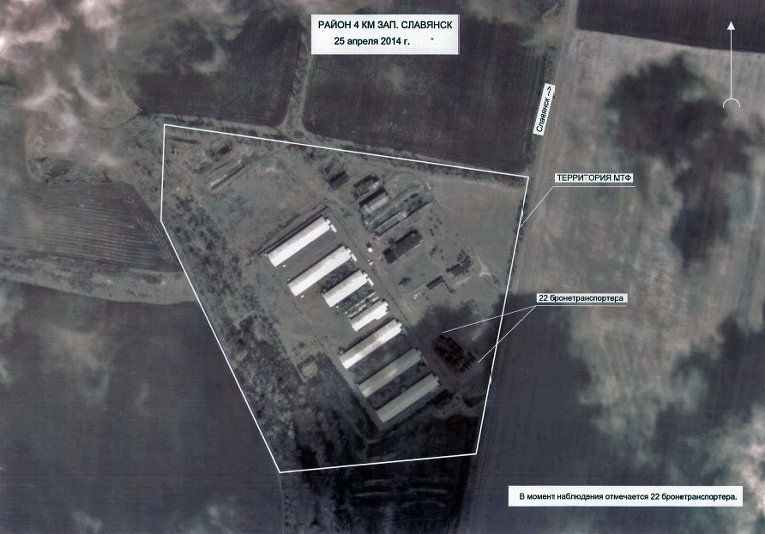 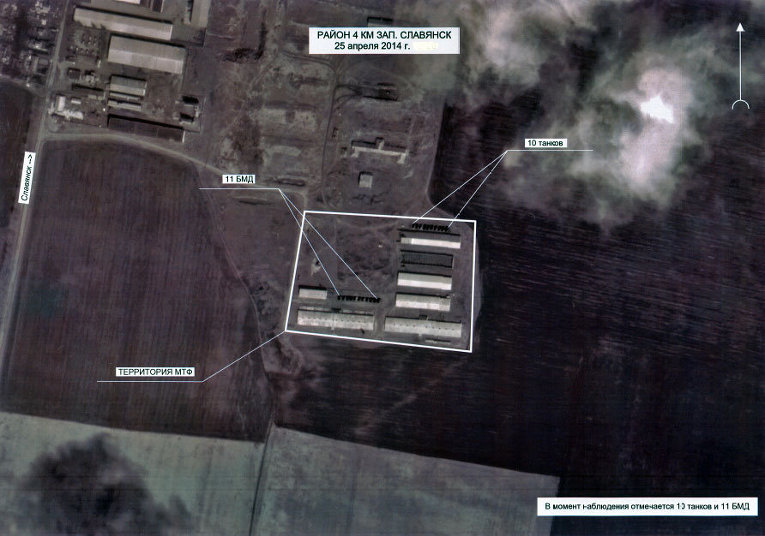 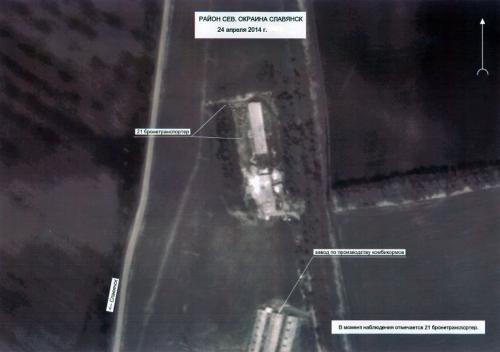 Naturally, none of this should come as a surprise, as rationally one would expect Ukraine to respond to a comparable build up of Russian forces along the Ukraine border which itself was revealed two weeks ago via satellite photos as well:

Above: Purported to be Russian military Su-27/30 “Flankers” aircraft at the Primorko-Akhtarsk Air Base in southern Russia, on the Sea of Azov which borders Ukraine. (Image: Digital Globe).

Above: purported to be Russian military tanks and infantry fighting vehicles at a military base near Kuzminka, east of the Sea of Azov in southern Russia (picture: Digital Glob)

Above: purported to be a Russian military airborne or Spetznaz (special forces) brigade at Yeysk, near the Sea of Azov in southern Russia (picture: Digital Globe).

Above: purported to be a Russian artillery battalion at a military base near Novocherkassk, east of the Sea of Azov in southern Russia (picture: Digital Globe).

It goes without saying that a matching build up (or at least an attempt at one) by Ukraine is normal and to be expected. The problem is that as we have witnessed every day over the past two weeks, military provocations on both sides of the conflict happen every day if not every hour. The latest one happened moments ago, as reported by RT:

Unknown assailants landed in helicopters and attacked a checkpoint in Soledar city in eastern Ukraine’s Donetsk region, a militia source told RIA Novosti adding that there is a fight going on. There is no information on the number of casualties.

Soledar is located about 30 kilometers south east of Slavyansk.

The people’s governor of Donbass region Denis Pushilin confirmed to RT that there is fighting in Soledar. As the unknown men attacked the checkpoint, the militia was forced to retreat, the source told RIA.

The second checkpoint is preparing for attack he said, adding that there are about 50 activists, many without weapons.

For now these skirmishes around “checkpoints” have been isolated events. But how long before the Ukraine “special forces” which may well amount to 15,000 troops as reported by Russian media, get involved. And how much longer after that until Russia retaliats. But the biggest question: who will be the agent provocateur who fires the first shot in hopes of launch an all out war? Indeed, who stands to gain the most from yet another war – one which will hardly be “contained”