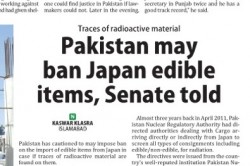 The Nation, Apr. 18, 2014: Pakistan may ban Japan edible items […] in case if traces of radioactive material are found on them. Federal Minister of Commerce Khurum Dastgeer Khan told the Senate on Thursday, currently the Ministry of National Food Security and Research is tasked to conduct thorough research to determine either the edible items from Japan were infected by radioactive rays or not. […] Senator Suriya Amiruddin who was interested to know whether there is any proposal under consideration of the Government to impose ban on import of edible items from Japan to avoid negative effect of radiation in those items. […] in April 2011, Pakistan Nuclear Regulatory Authority had directed authorities dealing with Cargo arriving directly or indirectly from Japan to screen all types of consignments including edible/non-edible, for radiation. […] The directives were issued from the country’s well-reputed institution Pakistan Nuclear Regulatory Authority […] The PNRA made clearance mandatory for every consignment being imported from Japan. It is worthy of mentioning here that country’s nuclear scientists had advised the federal government three years back to halt all types of goods from Japan to minimize the threat of radiation following the Fukushima Nuclear Crisis in Japan. The scientists had advised the government after they detected high level of Iodine from the consignments imported from Japan. […] in view that the move to ban imports from Japan may hurt bilateral relationship between the two friendly countries, the Pakistani government never imposed ban on import of goods from Japan.

Khurum Dastgeer Khan, Federal Minister of Commerce: “Concerned officials have been advised to investigate the matter relating to import of edible items from Japan following the incident of radioactivity in Japan. It is up to Ministry of Food Security and Research to advise Ministry of Commerce to continue import of edible items from Japan or impose ban on it.”