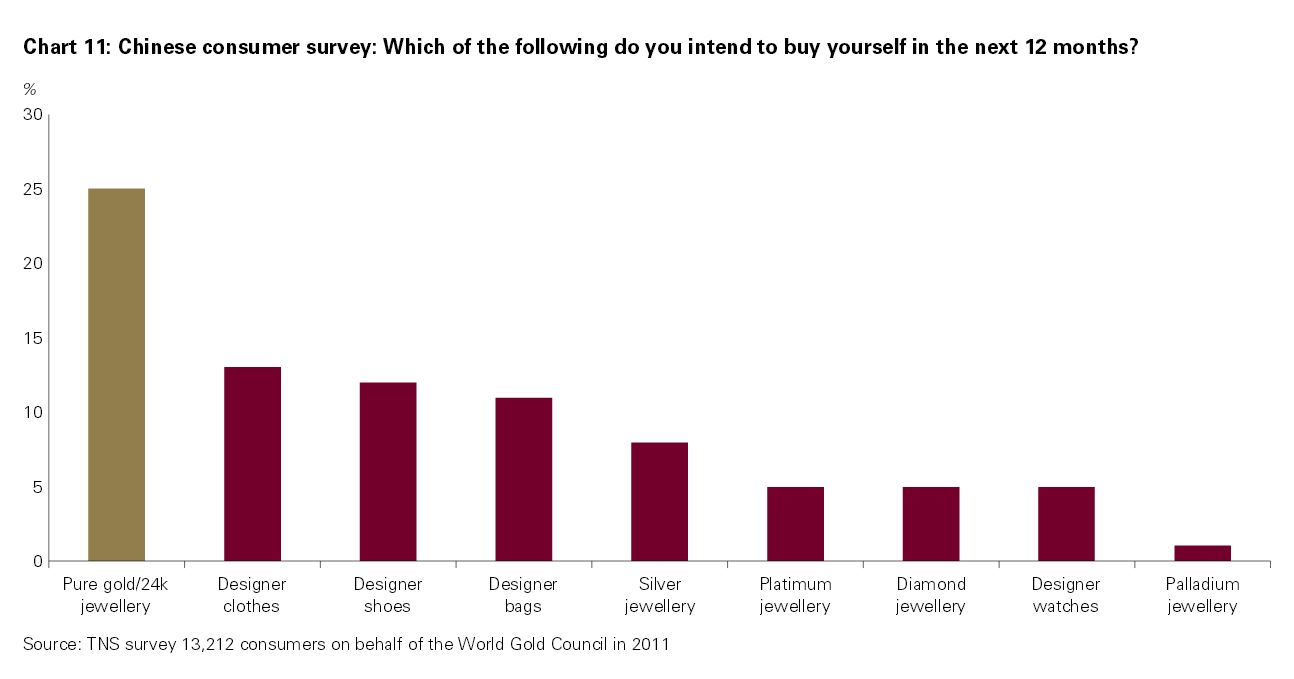 And some additional explanation from the World Gold Council:

The Chinese traditionally regard gold as a form of money. Indeed, the character for gold in Mandarin (jin) is also a synonym for money. This is an important fact when it comes to the motivations behind the purchase of jewellery. Asian buyers of plain, 22 or 24 carat jewellery have no doubt in their mind that they are buying gold as well as an object of beauty that can be worn. The perception of value is very important in markets such as India and China where plain, very high carat or ‘pure gold’ articles bought on low-mark-ups comprise the majority of gold jewellery consumption. As such, the level and direction of local gold prices usually have an important bearing on jewellery consumption. This was very clear in 2013 when in April of that year the sudden slump in prices triggered an extraordinary wave of buying in China. Consumers perceived this as a unique opportunity to exchange renminbi for gold at a very favourable rate. It was also of course a chance to bring forward planned purchases for gifts or weddings, especially as the consensus was that prices were bound, eventually, to move a good deal higher.

World Gold Council consumer research indicates that consumers remain very positively disposed towards ‘pure gold’ jewellery. It might be thought that the disappointing price trend in the second half of 2013 had undermined this optimism as well as the public’s desire to purchase ‘pure gold’ jewellery. This does not seem to be the case. An extensive consumer survey conducted towards the end of 2013 on behalf of the World Gold Council illustrates how China’s population continues to view ‘pure gold’ jewellery as a form of money, with little indication that this traditional attitude will change any time soon. Asked whether they agreed with the statement that 24 carat gold jewellery “…is as much an investment as it is a fashion item” no less than 80% of the sample agreed, while only 4% disagreed (16% held no view either way). Agreement levels were strong across all respondents. Moreover, support for future demand is strong: in a separate survey of over 10,000 Chinese consumers, 76% of those aged between 18 and 27 also affirmed ‘pure gold’ jewellery’s investment status. And the majority of respondents planned to maintain or increase their spending on 24 carat gold jewellery over the next 12 months (44% and 35% respectively.