Just yesterday, I wrote a post about how a South Carolina construction worker was fined $525 and lost his job for not paying $0.89 for a drink refill while working at the Ralph H. Johnson VA Medical Center in downtown Charleston. The point was to emphasize how the law comes down with a devastating vengeance when an average citizen commits a minor crime, yet allows the super rich to loot and pillage with zero repercussions. There is now a systemic two-tier justice system operating in these United States, and the result will unquestionably be tyranny if the trend continues unabated.

The latest example of a lowly citizen being subject to a disproportionate use of the law, is Jon Daniel of Peoria, Illinois. Jon was behind a parody Twitter account that mocked Peoria mayor Jim Ardis, and his biggest mistake was not making it clear that it was a parody. As a result, Twitter had already suspended the account weeks ago. Problem solved, right? Wrong.

The tough guy mayor was so offended that a plebe would dare criticize his royal highness that he ordered a police raid on the home of Jon Daniel and his roommates. Peoria native, Justin Glawe wrote an excellent article on the subject for Vice. He writes:

Jon Daniel woke up on Thursday morning to a news crew in his living room, which was a welcome change from the company he had on Tuesday night, when the Peoria, Illinois, police came crashing through the door. The officers tore the 28-year-old’s home apart, seizing electronics and taking several of his roommates in for questioning; one woman who lived there spent three hours in an interrogation room. All for a parody Twitter account.

Yes, the cops raided Daniel’s home because they wanted to find out who was behind @peoriamayor, an account that had been shut down weeks ago by Twitter. When it was active, Daniel used it to portray Jim Ardis, the mayor of Peoria, as a weed-smoking, stripper-loving, Midwestern answer to Rob Ford. The account never had more than 50 followers, and Twitter had killed it because it wasn’t clearly marked as a parody. It was a joke, a lark—but it brought the police to Daniel’s door. The cops even took Daniel and one of his housemates in for in-depth questioning—they showed up at their jobs, cuffed them, and confiscated their phones—because of a bunch of Twitter jokes.

So the police raid on Daniel’s house wasn’t an isolated incident; it was just another case of the cops acting shady—and naturally, many in this town are raising serious questions and concerns over the use of taxpayer resources and manpower to find out who ran @peoriamayor.

Fortunately, this story does have a silver lining. Daniel’s original Twitter account was actually pretty unsuccessful, with only 50 followers by the time it was shut down. Mayor Jim Ardis should’ve just left well enough alone, but he couldn’t do that, and as a result of all the attention this story has received in the blogosphere, new parody accounts have emerged. The most successful one is @NotPeoriaMayor and the avatar is Jim Ardis with a Hitler mustache. See below: 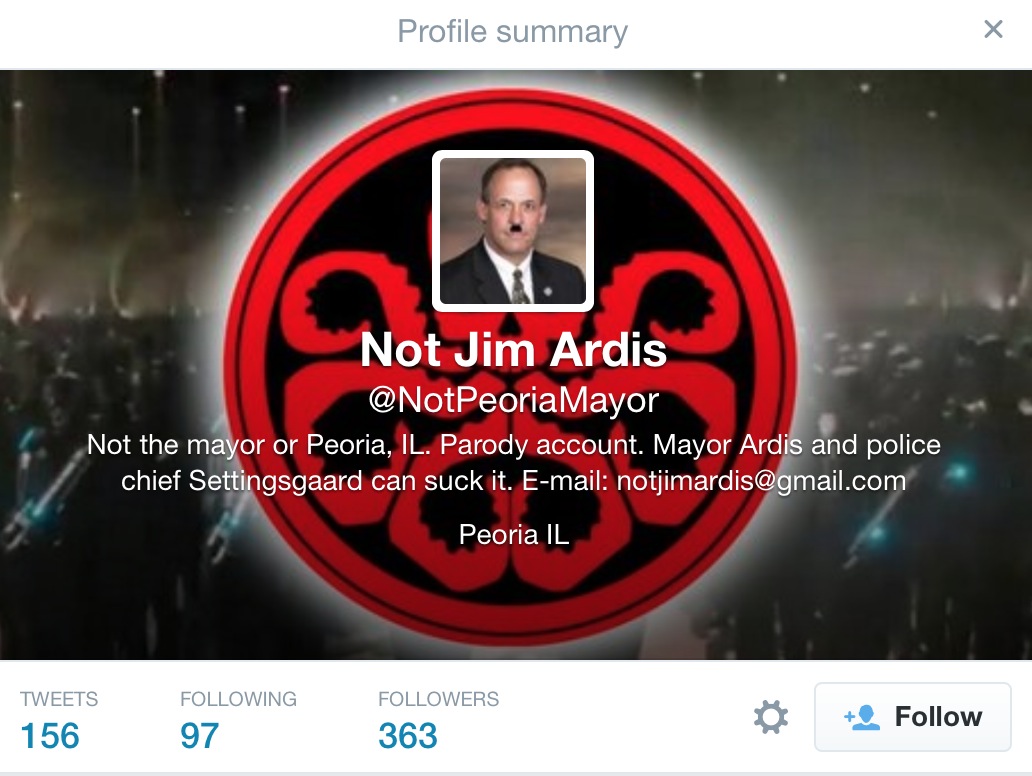 The best part is this account already has 7x the followers of the other one.

Jesus didn't die for your sins so you could make fun of politicians and you all would do well to remember that, peasants.

How did you get my children's Easter photos? RT @JamesGunn: Hope you’re all having a wonderful Easter weekend. pic.twitter.com/DVGs7OiCtj