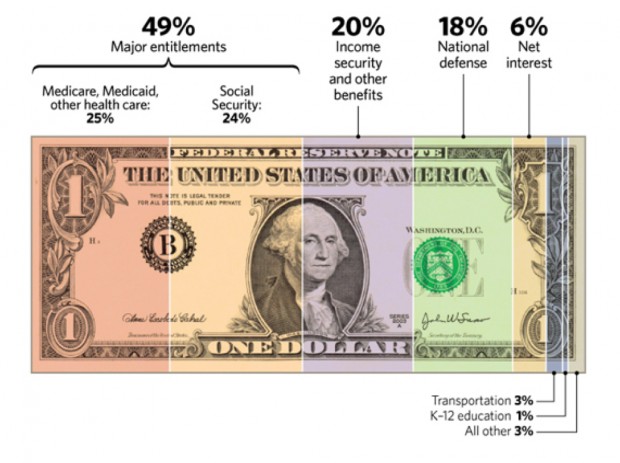 Just check out the chart below.  It comes from the Heritage Foundation, and it shows that 69 percent of all federal money is spent either on entitlements or on welfare programs…

So when people tell you that the main reason why we are being taxed into oblivion is so that we can “build roads” and provide “public services”, they are lying to you.  The main reason why the government taxes you so much is so that they can take your money and give it to someone else.

We have become a nation that is completely and totally addicted to government money.  The following are 18 stats that prove that government dependence has reached epidemic levels…

#1 According to an analysis of U.S. government numbers conducted by Terrence P. Jeffrey, there are 86 million full-time private sector workers in the United States paying taxes to support the government, and nearly 148 million Americans that are receiving benefits from the government each month.  How long can such a lopsided system possibly continue?

#3 The U.S. government has spent an astounding 3.7 trillion dollars on welfare programs over the past five years.

#4 Today, the federal government runs about 80 different “means-tested welfare programs”, and almost all of those programs have experienced substantial growth in recent years.

#6 While Barack Obama has been in the White House, the total number of Americans on food stamps has gone from 32 million to nearly 47 million.

#8 It sounds crazy, but the number of Americans on food stamps now exceeds the entire population of the nation of Spain.

#10 According to a report from the Center for Immigration Studies, 43 percent of all immigrants that have been in the United States for at least 20 years are still on welfare.

#11 Back in 1965, only one out of every 50 Americans was on Medicaid.  Today, more than 70 million Americans are on Medicaid, and it is being projected that Obamacare will add 16 million more Americans to the Medicaid rolls.

#12 The number of Americans on Medicare is projected to grow from a little bit more than 50 million today to 73.2 million in 2025.

#13 Medicare is facing unfunded liabilities of more than 38 trillion dollars over the next 75 years.  That comes to approximately $328,404 for each and every household in the United States.

#14 If the number of Americans enrolled in the Social Security disability program were gathered into a single state, it would be the 8th largest state in the entire country.

#16 It is being projected that the number of Americans on Social Security will rise from about 62 million today to more than 100 million in 25 years.

#17 Overall, the Social Security system is facing a 134 trillion dollar shortfall over the next 75 years.

Many will read this and will assume that I am against helping the poor.  That is completely and totally not true.  There will always be people that are impoverished, and this happens for many reasons.  In many cases, people simply lack the capacity to take care of themselves.  It is a good thing to take care of such people, whether the money comes from public or private sources.  In every society, those that are the most vulnerable need to be looked after.

The long-term solution is to get more Americans working or starting their own businesses, but the federal government continues to pursue policies that are absolutely killing the creation of jobs and the creation of small businesses in this country.  So our epidemic of government dependence is going to continue to get worse.

And many of these programs are absolutely riddled with fraud and corruption.  Just check out the following excerpt from a recent Natural News article…

To understand the extent of this fraudulent waste, go no further than Dr. Salomon Melgen, a Florida ophthalmologist who raked in $20.8 million from Medicare in 2012 alone. Dr. Melgen isn’t the only one bathing in the fraud of this crony government program. Medicare dished out over $1 million to almost 4,000 doctors in 2012, according to the new data release analyzed by The Washington Post.

Jonathan Blum, principal deputy administrator for the Centers for Medicare and Medicaid Services, is calling on the public for help in identifying fraud. He says, “The program is funded by and large by taxpayer dollars. The public has a right to know what it is paying for. We know there is fraud in the system. We are asking for the public’s help to check, to find waste, and to find potential fraud.”

Instead of fixing their own problems, they want us to help them do it.

And of course they always want more of our money to help fund these programs.  In fact, according to Americans for Tax Reform, Barack Obama has proposed 442 tax increases since entering the White House…

The more we feed the monster, the larger and larger it grows.

And yet poverty is not decreasing.  In fact, the poverty rate has been at 15 percent or greater for three years in a row.  That is the first time that has happened in decades.

Barack Obama promised to “transform” America, and yet poverty and government dependence have just continued to grow during his presidency.

Not that anyone really believes anything that he has to say at this point.  In fact, one recent survey found that only 15 percent of Americans believe that Barack Obama always tells the truth and 37 percent believe that he lies “most of the time”…