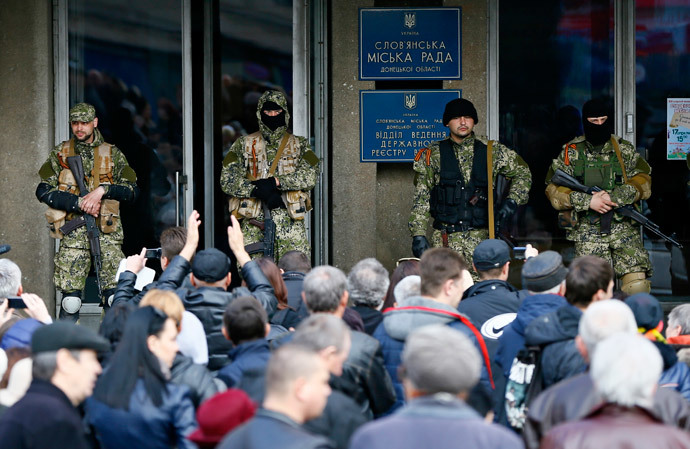 Ukraine’s coup-appointed acting President Aleksandr Turchinov has announced a crackdown on anti-government protesters in the north of the Donetsk Region, eastern Ukraine.

Read RT’s LIVE UPDATES for the latest developments in Ukraine

“The anti-terrorist operation started overnight Monday,” said Turchinov. “The aim of these actions is to protect the citizens of Ukraine.”

According to Turchinov, this ‘anti-terrorist operation’ also aims to prevent “attempts to break Ukraine apart.”

The anti-government protesters in south-eastern Ukraine have recently been protesting against coup-appointed Kiev authorities. They demand constitutional reform that would take into consideration the interests of all Ukrainian regions. They also propose the federalization of the country and to make Russian the second official language in the regions.

Earlier, a clip posted to YouTube showed local people in the town of Rodinskoye, Donetsk Region, who stopped a tank allegedly on its way from Kiev to take part in the crackdown against south-eastern Ukrainian cities.

Andrey Parubiy, head of Ukraine’s National Security and Defense Council, announced the first battalion of a National Guard “comprised of volunteers from Maidan self-defense troops”, has left Kiev for the south-east.

According to Parubiy, the “battalion is comprised of volunteers from the Maidan self-defense troops”.

On Monday, Turchinov signed a decree to officially begin a “special anti-terrorist operation” in the east of the country.

He ordered “that the National Security and Defense Council’s decision of April 13, 2014, ‘On urgent measures to overcome the territorial threat and to preserve the territorial integrity of Ukraine’ be put into effect.”

Russia has warned that if Kiev uses force against anti-Maidan protests in eastern Ukraine, this would undermine the effort to convene a four-party conference on resolving the crisis in the country, which would include the US, the EU, Russia and Ukraine.

Turchinov also proposed conducting a joint operation with UN peacekeeping forces, a decision that was strongly condemned by Russian FM Sergey Lavrov at a Beijing press conference on Tuesday as “totally unacceptable.”

The Kiev authorities have already tried to launch a so-called “anti-terrorist operation” in the eastern city of Slavyansk, Donetsk Region, after anti-government protesters seized several buildings in the city.

Gunfire broke out on Sunday, after troops in black uniforms supported by armored vehicles and several helicopters approached the roadblock set up by the locals. One person was killed and two others injured during the crackdown.

There were rumors that among the troops were the members of the radical ultranationalist Right Sector movement, who were mobilized to take decisive steps to “defend Ukraine’s sovereignty.”

These Ukrainian military vehicles are poised about 70km (44 miles) from Sloviansk. pic.twitter.com/YD8b9se2zm