As was expected, so called Russian separatists completely ignored Ukraine’s 0600 GMT ultimatum to hand over their weapons and give up, which means Ukraine now is in the clear, according to its leaders, to engage in the previously warned military “anti-terrorist” operation. As a result, as Reuters updates,  “towns in eastern Ukraine on Monday braced for military action. As the 9 a.m. (07.00 a.m. BST) deadline issued by authorities in Kiev expired, a Reuters reporter in the flashpoint city of Slaviansk, where armed men had seized two government buildings, said there was no outward sign the rebels were complying with the ultimatum.” Subsequent reports indicated that since the deadline passed, at least 4 people have been killed however since virtually no “factual” propaganda news out of Ukraine is to be believed, we would heavily discount this update. 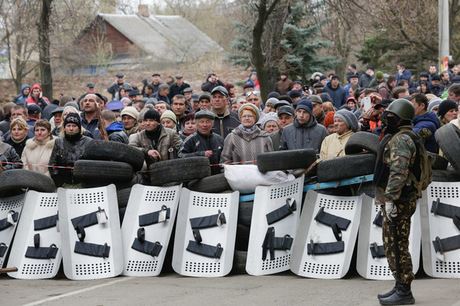 In Slaviansk as of 9 a.m. local time on Monday, a Russian flag still flew over police headquarters, one of two buildings taken over by the separatists, while masked men continued to man barricades of sandbags in front of it.

Even as the deadline passed, a truck appeared bringing more tyres to heap on top of the barricades to reinforce them.

There was tension in the air as people tried to go about their normal business, though school and colleges have been closed and parents advised to keep their children indoors.

Alexei Myzenko, a 38-year-old bank teller, was at work as usual, but he said he and his wife had told their son, who is at university in the eastern town of Kharkiv, not to attend lectures on Monday.

“We didn’t want anything to happen to him,” said Myzenko. “Of course, some people are afraid. But they are still lining up to get their pensions,” he said.

Myzenko said his wife, who is a teacher, had been called by the town administration to tell her that school was cancelled until further notice.

Iryna Zemlyanskaya, 62, who works as a pharmacist, said: “I am going to work. They’ve promised to use force so many times and have not done a single thing. No-one’s even afraid anymore.”

Below is the complete recap of overnight events courtesy of RanSquawk:

Should Ukraine once again escalate and launch the trumpeted military operation, watch for a prompt and significant Russian response.