Ukraine may have drawn its own red line overnight by saying it will send “special forces” into the latest east Ukraine city captured by “pro-Russia separatists” as we just reported, but Russia wasted no time in explaining how it would deal with it. Bloomberg cites Russian foreign minister Lavrov who stated that, “Russia Won’t Accept Ukraine Force Versus Demonstrators.” 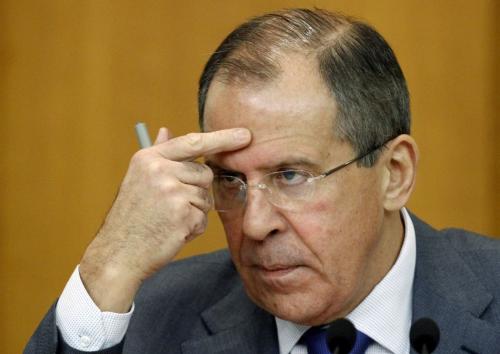 During the conversation A.B.Deschitsa tried to lay the responsibility for the deterioration of the situation in the South and South- East Ukraine on Russia. He argued that in these regions there are some Russian agents and allegedly some of them had already been arrested.

In response, Lavrov stated that there were no grounds for such assertions. He recalled that similar claims against Russia could be heard from Washington, but we have not been presented specific facts.

On the Russian side emphasized the responsibility of the present authorities in Kiev for preventing any use of force in the South and South- East of Ukraine. A.B.Deschitse indicated on the unacceptability of Kiev constantly sounding threats to storm buildings occupied by protesters in Donetsk and Lugansk. Lavrov urged the Ukrainian side to act peacefully , through dialogue , with full consideration of the legitimate demands of the South and South- East of Ukraine , including the direct involvement of these regions in the process of constitutional reform.

In response to questions regarding the prospects for A.B.Deschitsy quadripartite meeting of the Russia- US-EU -Ukraine Russian minister noted that the preparation of this event as part of the content and on the format and timing continues to be discussed between Moscow and Washington

Ball is in Kiev’s court.