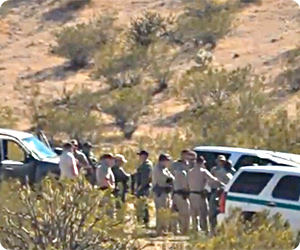 The federal government is out of control yet again, staging a heavily militarized siege of the Bundy cattle ranch in Nevada, where the Bureau of Land Management (BLM) has decided to bring a literal army of heavily armed “soldiers” to intimidate the Bundy family and steal his hundreds of cattle.(1)

The Bundy family has run cattle on the scrubland since the 1870’s, but in 1993, the government decided it “owned” the land and would start charging Bundy rent fees for his cows grazing on it. The Bundy family refused to pay the fees, so BLM went to court over the payments, and when that didn’t pan out the way they wanted, they decided to unleash an army of heavily armed, militarized “soldiers” to lay siege to the ranch and steal Bundy’s cattle.(2)

This is exactly the kind of equipment that President Obama famously said “…belong in the hands of soldiers, not in the hands of criminals; that they belong on the battlefield of war, not on the streets of our cities.”

And yet the federal government has now brought these military weapons to the Nevada desert, almost in an overt act of war against an American family engaged in productive farming and ranching — something the Obama administration seems to utterly despise as it rolls out aggressive marketing of food stamps to maximize the number of Americans living on government handouts.

See this astonishing video from Government Gone Wild to learn more about the explosion of America’s entitlement society.

As part of the tyranny siege, the feds set up a “First Amendment Area” in which they said all protesters must remain.

The very idea of a government-defined “zone” that limits where the First Amendment can be exercised is of course wildly offensive to the very foundations of America. If free speech is strictly limited to a small “zone” defined by the government, then it’s not exactly free, is it?

The move was even too much for the Governor of Nevada to stomach. He immediately went on the record, saying:

“Most disturbing to me is the BLM’s establishment of a ‘First Amendment Area’ that tramples upon Nevadans’ fundamental rights under the U.S. Constitution. To that end, I have advised the BLM that such conduct is offensive to me and countless others and that the ‘First Amendment Area’ should be dismantled immediately. No cow justifies the atmosphere of intimidation which currently exists nor the limitation of constitutional rights that are sacred to all Nevadans. The BLM needs to reconsider its approach to this matter and act accordingly.”

But why should it? The BLM has already decided to approach the situation as an armed military assault against an American farmer. Why else bring 200 soldiers to the scene and position snipers on the hilltops? “The government has brought everything but tanks and rocket launchers,” Bundy told the Free Beacon.

According to that same story, there are also eight helicopters circling the ranch, no doubt conducting tactical surveillance and planning attack routes for the militarized feds to pursue once they stage a reason to start shooting. Soon we will probably hear some made-up government propaganda like “Oh, they’re cooking meth in there!” to justify an armed assault on the family.

The BLM also seized state road 170, declaring it off limits. When Bundy’s son Dave started taking photos on the road, he was immediately thrown to the ground and arrested. Apparently, he made the mistake of exercising his First Amendment rights outside the “First Amendment Area” set up by the feds. Yes, this is America today: You can’t even take photos of your own ranch without being arrested!

“One [officer] put his knee on his head, the other put his boot on his head and pushed him into the gravel,” said Carol Bundy. “He’s got quite a bruised head. Just bruised him up pretty good.”

The ‘net is beginning to erupt with outrage at the Feds’ use of extreme militarized force to threaten the Bundy family.

Vowing to take a stand for, “your liberty and freedom,” Bundy says he is prepared to be killed as authorities surround a 600,000 acre section of public land as a result of Bundy violating a 1993 Bureau of Land Management ruling which changed grazing rights in order to protect the endangered desert tortoise.

The standoff has echoes of the 1992 Ruby Ridge incident, during which Randy Weaver, accused of selling an ATF agent two illegal sawed-off shotguns, became embroiled in a tragic confrontation with the United States Marshals Service (USMS) and the FBI, resulting in the death of Weaver’s son Sammy, his wife Vicki, and Deputy U.S. Marshal William Francis Degan.

The Blaze has also chimed in with:

Armed federal agents deployed last week to northeast Clark County, Nev., for what can only be described as a major escalation in a decades-long standoff between a local cattle rancher and the U.S. government.

The BLM seems oblivious to the rights of Americans, claiming Bundy’s cows are “trespassing” and that Bundy owes the federal government “more than $1 million in fees associated with cattle grazing in trespass.”(3)

Watch the videos yourself

Click here to see the videos of Bundy’s family and his ranch, along with local supporters who are trying to protect him from what they see as a tyrannical overreach of federal authority and military power against American citizens.