The relative calm of the last two weeks as US talking-heads proclaim Ukraine ‘fixed’, Russia ‘under control’, and Europe ‘recovering’ is being obliterated this morning. The storming of various non-Crimean Ukrainian city government buildings suggest round two of the push is beginning and Russia is wasting no time explaining how this will go down. Russian Senator Viktor Ozerov stated that “Russia has no right to [send peacekeepers] unilaterally” to Eastern and Southern Ukraine (unless the UN agrees)… but… “Russia is interested in stability in Ukraine. At the same time, the will of the people must be documented. A referendum is the most democratic way of expressing one’s will.” In other words, “we can’t help you unless you hold a referendum to annex.” Stage 2 is beginning… and it seems Ukraine is getting it as they are preparing to issue a state of emergency.From Russia with no love – we can’t help you, our poor Russian Ukrainian friends…

Russian peacekeepers can be sent to a foreign country exclusively within the framework of international law, not at the request of local authorities, Chairman of the Federation Council’s Defense and Security Committee Viktor Ozerov told Interfax while commenting on the Donetsk People’s Council’s possible appeal to Russia to send peacekeepers to this part of Ukraine.

“Our peacekeepers can only act in compliance with international law. We had examples when peacekeepers were sent to South Ossetia and Abkhazia, but that was done within the framework of the Commonwealth of Independent States. Just sending our peacekeepers to Donetsk, or elsewhere at the request of the local authorities would go against the principles of international law,” Ozerov said.

“Russia has no right to do this unilaterally. If, however, the UN Security Council passes a resolution on the introduction of peacekeepers, Russia, as its permanent member and a signatory to the Treaty on Cooperation and Security in Europe, will have the right to join a peacekeeping contingent in order to guarantee security in this or that region,” Ozerov said.

Unless you hold a referendum…

He said the Federation Council allowed the president to use the military in Ukraine at an emergency meeting in March. “That was connected with the situation in Crimea. However, in this case we were motivated by the Black Sea fleet agreements and the need to enhance the security of our bases. We are satisfied that we did not have to use Russian servicemen during the referendum in Crimea, and that residents of Crimea decided their future on their own,” Ozerov said.

Commenting on the situation in Ukraine’s eastern regions, where pro-Russian forces want to hold a referendum, Ozerov said that, “it would be counterproductive to incite events from the outside.”

“Russia is interested in stability in Ukraine. At the same time, the will of the people must be documented. A referendum is the most democratic way of expressing one’s will,” Ozerov said.

And local ‘Russian’ residents are getting the message…

“What is happening in Donetsk, Luhansk and other eastern regions of Ukraine is logical, taking into account the policy being pursued by the Ukrainian leaders, who disregard ordinary citizens’ opinions and appoint oligarchs to govern,” Ryazansky told Interfax.

As is the Ukraine government,

A law proposing the introduction of a state of emergency in Donetsk, Lugansk and Kharkov regions following the public disorder over the weekend has been submitted to the Rada.

Presidential candidate, Yulia Tymoshenko, has arrived in Donetsk in eastern Ukraine, following large-scale protests there over the weekend.

She labeled the occupation of local administrative buildings in Ukraine a “separatist power grab,” and has called on the government to “make such actions impossible in the future.”

A group of about 100 masked men with baseball bats attacked the demonstrators, forcing them to flee, with police unable to separate the two sides. The activists then occupied the square, and began chanting “Referendum! Referendum!” – demanding a poll that would allow the region greater autonomy from Kiev.

It seems the market’s hope for stability are taking a battering also (especially after last week’s exuberant call from SocGen to get long – following Goldman) with 2-month maturity bond yields breaking above 30% once again. 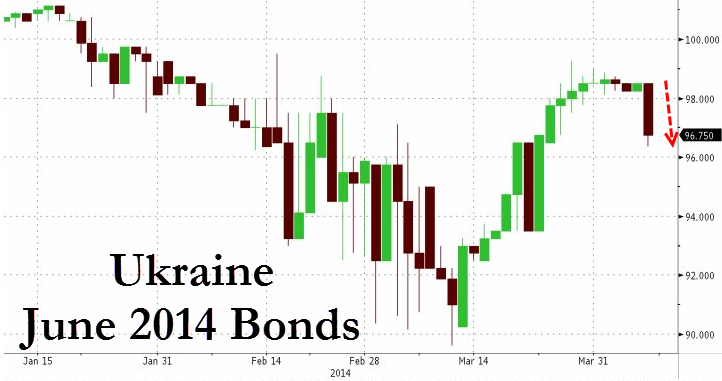