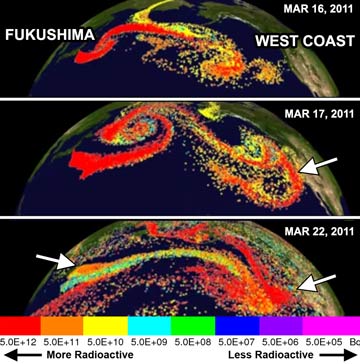 Fukushima Radioactive Aerosol Dispersion, NOAA: The [HYSPLIT] model was developed by NOAA to follow the transport and dispersion of pollutants in the atmosphere. In HYSPLIT, the computation is composed of four components: transport by the mean wind, turbulent dispersion, scavenging and decay. A large number of pollutant particles, which by convention are called “particles” but are just computational “points” (particles or gases), are released at the source location and passively follow the wind. […] March 11th […] by 16:36 a nuclear emergency was reported. By the early morning hours of March 12th, radioactive emissions were occurring […] the simulation from NOAA’s HYSPLIT model shows a continuous release of tracer particles from 12-31 March at a rate of 100 per hour representing the Cesium-137 emitted from Fukushima Daiichi. Each change in particle color represents a decrease in radioactivity by a factor of 10.

The March 22, 2011 NOAA model (above right) shows the West Coast of US and Canada covered in red particles, while the Fukushima site — and all of Japan — are under orange particles.  According to the NOAA above a “change in particle color represents a decrease in radioactivity by a factor of 10”