Maybe Bitcoin will be used by the elitists to create their cashless society … after the global financial/economic collapse … as planned.

I do believe that gold and silver will be the best protection for your financial assets (like food & water supplies will ‘protect’ your physical body) in the future.

Only PHYSICAL gold and silver are real, everything else will turn out to be a (‘virtual’) illusion.

Watching this bitcoin ‘sales pitch’ video was quite ‘painful’ and several different ‘manipulation alarms’ went off simultaneously in my brain. 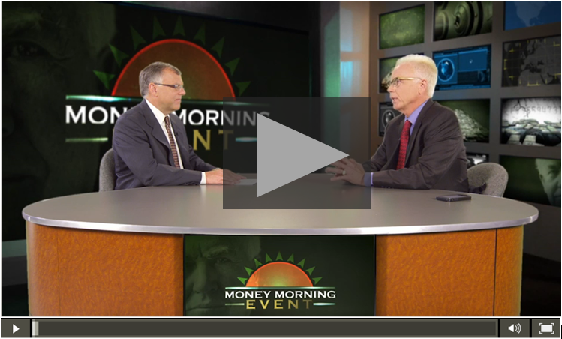 Editor’s Note:After initially airing this interview exclusively for their readers, Money Morning has released it to the public, so that people across America can understand exactly what’s happened and what’s coming. Click here to watch it.

And with the U.S. dollar losing 38.5% of its value since 2002, Buffett’s concerns are unfortunately justified.

36 cities in 20 states have taken aggressive measures to abandon the U.S. dollar.

And more are planning to do so in the near future.

“These cities and towns are essentially telling people they no longer want them to pay their water and heating bills, or parking tickets, really anything with U.S. dollars anymore,” Robinson said.

However, it’s not just the cities taking steps to protect themselves from the rapid decline of the once mighty dollar.

It’s the citizens themselves.

“Look at Vicco, Kentucky. Everything escalated here so fast, police are refusing to be paid their salaries in U.S. dollars.” Robinson revealed.

“And the mayor and city commission couldn’t do anything to stop it.  In fact, they had to pass legislation to allow it.”

And if that wasn’t shocking enough, this crisis is now spreading from local governments into the private sector.

Throughout America, 200,000 businesses have followed the lead of these cities and are now giving their employees the option of being paid their salaries in something other than the U.S. dollar.

But it’s what that “something” is that has many people at the Federal Reserve and on Capitol Hill worried.

More:What is replacing the dollar in these U.S. cities and companies? That was the most shocking part of the Robinson interview. (Click here to watch it).

Michael Robinson is a former board member of one, Silicon Valley venture capital firm and a senior advisor for two others.

He worked alongside Lee Iacocca and Roger Smith, the CEOs of Chrysler and GM, as they led the robotics revolution that saved the U.S. automotive industry in the 1980s.

In the 1990s he was one of five people involved in the early meetings for what would become the $160 billion “cloud computing”phenomenon.

And post-911, as cyber security was becoming a focus for our National Intelligence Community, Robinson was with Dave DeWalt, the CEO of McAfee Inc.

But his Silicon Valley, venture capital background is only one hat of many he’s worn during his career.

Robinson was also a Pulitzer Prize-nominated, investigative journalist, who has been featured in The New York Times, Detroit News, The Wall Street Journal, San Francisco Examiner, and the Kansas City Times.

Robinson made international headlines when he exposed an $80 million scandal at Bank of America that forced the financial giant to shake up its executive ranks.

And his 1990s book, Overdrawn: The Bailout of American Savings, correctly predicted the corrupt dealings of our financial institutions would eventually drive the country to the brink of an economic collapse.

Michael began tracking this trend of U.S. cities taking aggressive measures to abandon the dollar after uncovering and closely examining a transcript of a secret 5-hour meeting that took place in a rural, UK cottage.

Attending this meeting was the head of Google, Eric Schmidt, as well as an advisor to the Secretary of State, a Director of the International Crisis Group, and the Vice President of the Council on Foreign Relations.

They discussed a new form of money they believed was “changing society.”

And judging from what is taking place in these American cities and businesses, that is exactly what’s happening.

After conducting the interview, Money Morning Publisher, Mike Ward, mentioned one particular part that startled him the most.

“Michael pulls out a chart that shows how this dollar crisis can cause a massive stock market collapse, we’re talking historic, at any moment.  I couldn’t believe my eyes. People need to see this before it’s too late.” Ward said.

Michael Robinson predicts that, as more U.S. cities take action to abandon the dollar, it will become clear this is the most important economic story happening in the world.

“Folks need to understand, this isn’t just happening in America. In China they’re abandoning both U.S. dollars and gold for this new form of currency. In Germany, entire towns have abandoned the EURO. So no money is sacred,” Robinson warned.

Editor’s Note:After initially airing this interview exclusively for their readers, Money Morning has released it to the public, so that people across America can understand exactly what’s happened and what’s coming. Click here to watch it.