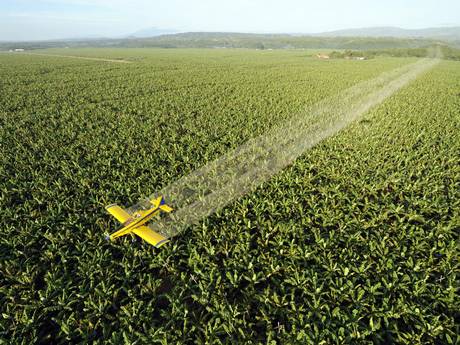 A aircraft sprays fungicide over a plantation (Getty Images)

Scientists have warned that the world’s banana crop, worth £26 billion and a crucial part of the diet of more than 400 million people, is facing “disaster” from virulent diseases immune to pesticides or other forms of control.

Alarm at the most potent threat – a fungus known as Panama disease tropical race 4 (TR4) – has risen dramatically after it was announced in recent weeks that it has jumped from South-east Asia, where it has already devastated export crops, to Mozambique and Jordan.

A United Nations agency told The Independent that the spread of TR4 represents an “expanded threat to global banana production”. Experts said there is a risk that the fungus, for which there is currently no effective treatment, has also already made the leap to the world’s most important banana growing areas in Latin America, where the disease threatens to destroy vast plantations of the Cavendish variety. The variety accounts for 95 per cent of the bananas shipped to export markets including the United Kingdom, in a trade worth £5.4bn.

The UN Food and Agriculture Organisation (FAO) will warn in the coming days that the presence of TR4 in the Middle East and Africa means “virtually all export banana plantations” are vulnerable unless its spread can be stopped and new resistant strains developed.

In a briefing document obtained by The Independent, the FAO warns: “In view of the challenges associated with control of the disease and the risk posed to the global banana supply, it is evident that a concerted effort is required from industry, research institutions, government and international organisations to prevent spread of the disease.”

Scientists are particularly concerned about the impact of TR4 across the developing world, where an estimated 410 million people rely on the fruit for up to a third of their daily calories.

According to one estimate, TR4 could destroy up to 85 per cent of the world’s banana crop by volume.

Since it emerged in the 1950s as the replacement for another banana variety ravaged by an earlier form of Panama disease, Cavendish has helped make bananas the most valuable fruit crop in the world, dominated by large multinational growing companies such as Fyffes, Chiquita and Dole.

But the crop – and many other banana varieties – have no defence against TR4, which can live for 30 years or more in the soil and reduces the core of the banana plant to a blackened mush.

It can wipe out plantations within two or three years and despite measures to try to prevent its spread from the original outbreak in Indonesia, it is now on the move. Such is the virulence of soil-based fungus, it can be spread in water droplets or tiny amounts of earth on machinery or shoes.

Professor Rony Swennen, a leading banana expert based at Leuven University in Belgium, said: “If [TR4] is in Latin America, it is going to be a disaster, whatever the multinationals do. Teams of workers move across different countries. The risk is it is going to spread like a bush fire.”

Another senior scientist, who asked not to be named because of his links with the banana industry, said: “There are good grounds for believing that TR4 is already in Latin America.”

The Panama fungus is just one of several diseases which also threaten banana production, in particular among smallholders and subsistence farmers.

Black sigatoka, another fungus to have spread from Asia, has decimated production in parts of the Caribbean since it arrived in the 1990s, reducing exports by 90 to 100 per cent in five countries.

Professor Randy Ploetz, of the University of Florida, said: “The Jordan and Mozambique TR4 outbreaks are alarming but have helped increase awareness about this problem.”

But the large producers insist the problem can be controlled. Dublin-based Fyffes, which last month announced a merger with America’s Chiquita to form the world’s largest banana company, said: “While we continue to monitor the situation, as of yet we do not foresee any serious impact for UK banana supplies.”

The Cavendish: A top banana under threat

When the world banana industry found itself in crisis in the 1950s, it was saved by a fruit cultivated in Derbyshire and named after a duke.

The Cavendish banana was grown by the gardener and  architect Joseph Paxton while he was working for the Duke of Devonshire at Chatsworth House.

Paxton managed to acquire one of two banana plants sent to England in around 1830 and began growing the fruit in the stately home’s glasshouses. He named his banana Musa cavendishii after the 6th Duke of Devonshire, William Cavendish.

The Chatsworth bananas were later sent to Samoa and the Canary Islands, providing forerunners for the variety which emerged in the 1950s to succeed the Gros Michel or Big Mike – the banana sub-species wiped out by an early version of Panama disease between 1903 and 1960.

Cavendish is now the world’s single most successful – and valuable – banana, accounting for 47 per cent of all cultivated bananas and nearly the entire export trade, worth £5.3 billion.