– How To End TBTF? Do What Vietnam Does: Sentence Bankers To Death By Firing Squad (Zerohedge, April 4, 2014):

For the past five years, one of the most theatrical topics of superficially deep debate by both regulators and legislators has been a simple one: how to end the abuse of power and relentless gambling with zero fear of consequences by systemically important, Too Big To Fail banks, which led to the unprecedented 2008 spectacle of Goldman’s Treasury Secretary Hank Paulson demanding that Congress give him a blank check to bail out anyone and anything (mostly his former employers) he deems fit.

The theatricality is also grossly comic, because every other week central bankers around the world release philosophical papers with scnietific notation including that fancy Integral sign, musing over the apparent unsolvability of this epic dilemma (just in case it is still unclear, the central bankers work for the commercial bankers) all the while the global megabanks get megabigger until, at one inevitable point in the future, JPMorgan Merrill Fargogroup of America Sachs will be the only bank left standing. And be in complete control of not only the country, but courtesy of its $1+ quadrillion “galatically important” balance sheet, the entire world.

What is funniest, of course, is that there is a gloriously simple solution to all the world’s TBTF problems, one that could be enacted in a HFT millisecond by pulling the trigger, so to speak.

The solution comes from none other than that historic US nemesis, Vietnam, where unscrupulous financiers don’t just go to jail. Sometimes, they get death row. 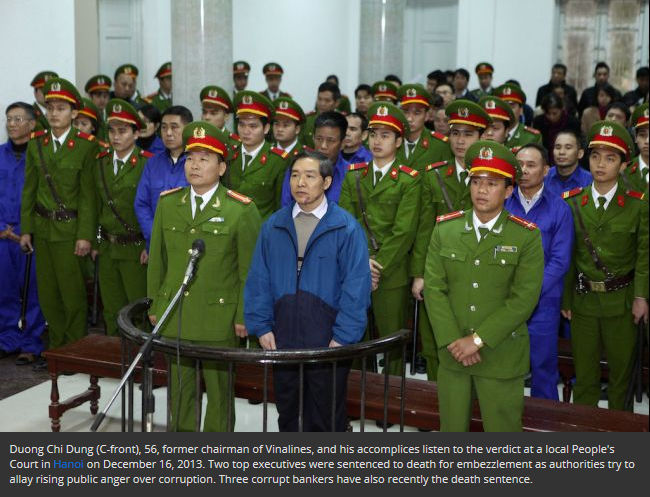 Amid a sweeping cleanup of its financial sector, Vietnam has sentenced three bankers to death in the past six months.

In March, a 57-year-old former regional boss from Vietnam Development Bank, another government-run bank, was sentenced to death over a $93-million swindling job.

According to Vietnam’s Tuoi Tre news outlet, several of his colluders were sentenced to life imprisonment after they confessed to securing bogus loans with a diamond ring and a BMW coupe. And last week, in an unrelated case, charges against senior employees from the same bank allege $47 million in losses from dubious loans.

Wait, so if you get the proverbial nail gun in the back of the head for a measly $25 million, what should banks that “received” trillions in involuntary taxpayer gifts get? Obamacare?

But these death sentences nevertheless are high profile scandals in Vietnam.

That’s the point. Human rights watchdogs contend that splashy trials in Vietnam are acts of political theater with predetermined conclusions. The audience: a Vietnamese public weary of state corruption. But these sentences also sound loud alarm bells to dodgy bankers who are currently running scams.

“It’s a message to those in this game to be less greedy and that business as usual is getting out of hand,” said Adam McCarty, chief economist with the Hanoi-based consulting firm Mekong Economics.

“The message to people in the system is this: Your chances of getting caught are increasing,” McCarty said. “Don’t just rely on big people above you. Because some of these [perpetrators] would’ve had big people above them. And it didn’t help them.”

Like most nations that crush dissent and operate with little transparency, Vietnam is highly corrupt.

Also, just like the US, only here the theft occurs at such a far more grand scale, that few can even conceptualize it, let along come up with an appropriate sentence.

According to a World Bank study, half of all businesses operating within the communist state expect that gift giving toward officials is required “to get things done.” Transparency International, which publishes the world’s leading corruption gauge, contends Vietnam is more corrupt than Mexico but not quite as bad as Russia.

Unlike in America, where judges can’t sentence white-collar criminals to death, Vietnam can execute its citizens for a range of corporate crimes.

Amnesty International reports that death sentences in Vietnam have been handed down to criminals for running shady investment schemes, counterfeiting cash and even defaulting on loans. This is unusual: United Nations officials have condemned death for “economic crimes” yet Vietnam persists with these sentences — as does neighboring China.

Though statistics on Vietnam’s opaque justice system are scarce, a state official conceded that more than 675 people sit on death row for a range of crimes, according to the Associated Press.

It’s still unclear how the bankers will be killed. Vietnam’s traditional means of execution involves binding perpetrators to a wooden post, stuffing their mouths with lemons and calling in a firing squad. The nation wants to transition to lethal injections. But European nations refuse to export chemicals used in executions (namely sodium thiopental) to governments practicing capital punishment.

Fraudulent bankers are receiving heavy sentences at a moment when Vietnam is enacting major financial reforms.

And guess what: it will work. Because there is nothing as deterrant to criminal, sociopath behavior than knowing that no matter how many trillions of derivatives on your balance sheet, the final outcome is a blindfold and a cigar.

Then again, in “democratic, uncorrupt” America, this solution will never take place, for the simple reason that the same bankers who would be executed, not only print the money that everyone else uses, certainly the politicians, but also own and run everything. So why on earth would they suggest the only thing that could possibly end the party?