In terms of economic might, BBVA has created an index of “world market power” enabling an at-a-glance view of a nation’s impact on the global economy via relevance of exports, exposure to external shocks, technological content, and retained value-added. And the winner is… Hint, not USA…

As BBVA sums up,

China shows the highest value not only among emerging economies but also when considering all the sample, inverting with the US the rank order given by the exports’ share in nominal terms.

China holds the largest share among emerging markets in the sample for 9 out of 18 industries, including all manufacturing groups except food (surpassed by Brazil). The largest industry share corresponds to textiles and leather (above 30%).

Russia and especially Saudi Arabia are well ahead in the ranking due to their key role in the oil market for which they show a high degree of product concentration.

India and Mexico have a similar share of world exports, although the market power index is significantly higher for the former on dominant positions in ‘other manufactures’ and business services. 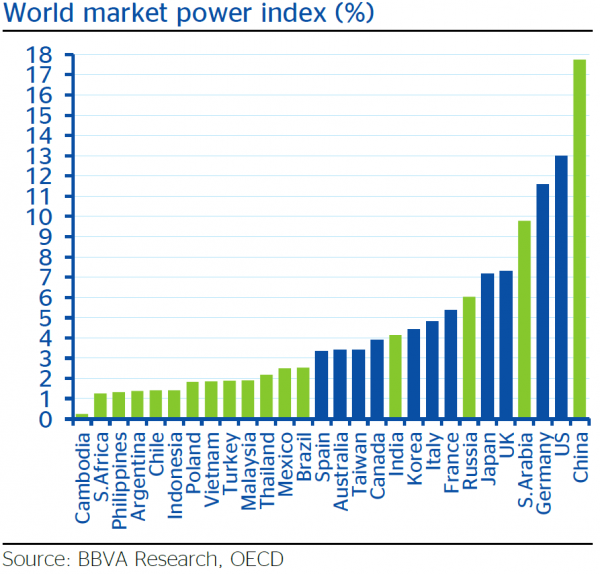 On a side note, as Constantin Gurdgiev notes, three out of current G7 states should not be anywhere near G7. You might argue about Saudi Arabia’s place in the world’s ‘power by exports’ rankings, but China and Russia certainly are diversified enough and have a strong enough sway to be in G7.