NOT an April Fool’s joke. 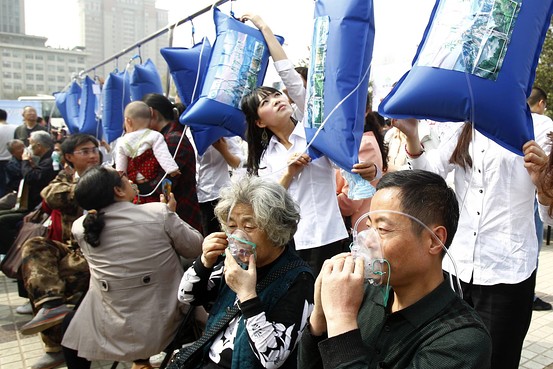 No, not a scene from Spaceballs. Reuters

Proving that China’s fight against pollution has moved decisively into the realm of parody, bags containing mountain air were shipped into one particularly smog-addled city over the weekend. 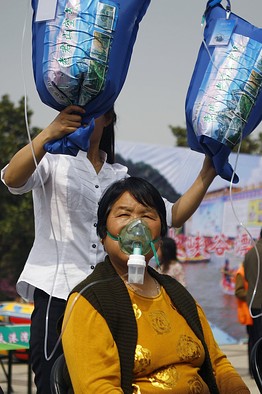 Residents from the elderly to young children lined up for a chance at the bags. Reuters

No, it wasn’t a scene from Spaceballs. According to the organizer, a Henan-based travel company, 20 bright blue bags of air were shipped to Zhengzhou, capital of central China’s Henan province, as a special treat for residents. The air originated from Laojun Mountain, some 120 miles away from the city, and was brought as part of a promotional gimmick to show oxygen-deprived city residents what they’re missing.

In its account of the event, the state-run China News Service said that some of the residents who lined up for the chance to inhale—they were limited to a few minutes each—tried to wring the bags in order to extract every bit of air possible.

“I felt my baby move right when I breathed in,” one pregnant woman who participated in the event told the agency. “I would love to walk in the mountain’s forests after my child is born,” Sun added. China’s environmental ministry announced last week that Zhengzhou was among the country’s top 10 most-polluted cities.  Its AQI on Monday was an unhealthy 158. By contrast, the Monday AQI forecast for Bakersfield, CA, the most polluted city in the U.S., was 45.

The canned-air idea is hardly unique to Henan: Rags-to-riches Chinese tycoon Chen Guangbiao, known for his splashy publicity stunts, including his past efforts to woo the owners of the New York Times, began selling such cans in 2012.

In case you weren’t among one of the lucky ones who got a lungful in Henan this weekend, China Real Time has your how-to on buying a perhaps more practical tool here.