In a TV address to a torn nation, Ukraine’s PM Yatsenyuk first implied heating prices would rise incrementally, and then later confirmed a plan to increase prices 100% in the next two years (and nearly 200% by 2017) as the cost of imported Russian gas is expected to rise to $500 from the current $84.

Not only did the Ukrainians have the hard rug of the consequences of statism pulled out from underneath them, but the move was followed with tougher capital controls, which restricted cash purchases to $1,300 per person per day after the Central Bank said “amid a tense situation in money markets” it is now broke. (We covered a reported shipment of gold out of Ukraine a couple of weeks ago)

In a joint European Union/United States statement the two powers said Ukraine “requires consolidation of all reform efforts.” The austerity measures came the day before it was announced Ukraine had “won” a $27 billion international financial credit line. From Reuters:

The International Monetary Fund announced a $14-18 billion standby credit for Kiev in return for tough economic reforms that will unlock further aid from the European Union, the United States and other lenders over two years, effectively pulling Kiev closer to Europe.

Russian gas prices to Ukraine are expected to increase as Russia has grown less-interested in providing the once Russian-facing Ukraine with gas subsidies. The IMF stated one of its first goals would be “cleaning up Ukraine’s opaque energy giant Naftogaz, which imports gas from Russia’s Gazprom.” Naftogaz’s chief executive was arrested last week in US a corruption probe.

A COMPARISON OF THE UKRAINE TO THE US
Many in the US may think that tremendously rising prices and overt capital controls cannot happen there. Let’s compare Ukraine’s total debt to GDP … a country considered to be bankrupt … with the US. 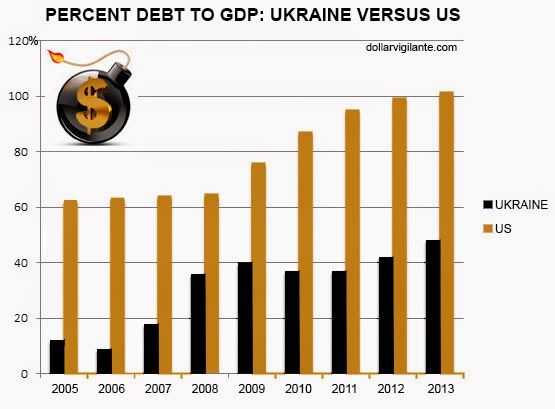 That’s right. The US has more than double the debt to GDP than the Ukraine.

How is it that there aren’t riots in the streets and a government in the US on the verge of a collapse? Mostly media and institutionalized brainwashing has so far limited the riots. As for a collapse of the US government? The only thing keeping its entire evil empire functioning is a still widely accepted US dollar.

And that is all changing dramatically now too. Russia and China have made very vocal statements about their desire to stop using the US dollar. Of course, many oil producing countries such as Iraq and Libya wanted to also move off the petro dollar. We all know what happened there. And, the prince of peace, Barack O’Bomber is currently in Saudi Arabia likely making threats and bribes to ensure they stay onside with the dollar.

In any case, the end of this gargantuan US government and the US dollar are nigh. With a debt of over $17 trillion all it would take is for interest rates to rise to 10% and almost every penny of extorted money (taxes) that the US government collects would go to interest payments on the debt alone.

During the last similar time in history this happened, the 1970s, interest rates were allowed to actually go to their market levels and topped out at 18%. 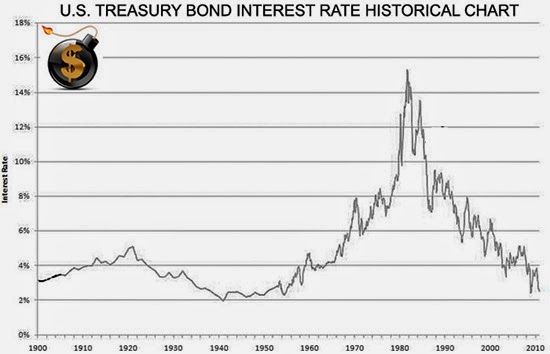 That is why Ben Bernanke and Janet Yellen must manipulate interest rates as low as possible for as long as possible. There is a massive amount of debt in the US now and even an interest rate of 5% would likely implode the entire financial system and the government itself.

Keeping rates near 0% and printing money via Quantitative Easing in order to fund the government will eventually lead to hyperinflation.

THE END OF THE MONETARY SYSTEM AS WE KNOW IT (TEOTMSAWKI)

All of the actions pertaining to the Ukraine today are all symptomatic of the end stages of TEOTMSAWKI.

The West has implemented numerous sanctions on Russia. Visa and MasterCard stopped providing services for payment transactions for clients at Bank Rossiya, due to US sanctions, and Putin said Thursday that Russia would develop its own credit card system.

It is all just re-arranging the chairs on the deck of the Titanic, however, as far as the US government and the US dollar is concerned. The US government is in much worse shape than the Ukraine, fiscally, and as the rest of the world begins to move away from the dollar it will be game over for the current financial and monetary system in the US.

Many Ukrainians with assets are probably wishing now that they had moved some assets into bitcoin (we will have the most complete report on bitcoin to date available in the coming weeks), had purchased some precious metals and had them outside of their home country (see Getting Your Gold Out Of Dodge) and a foreign bank account in a much less indebted and taxed region (as you can get from TDV Offshore).

Americans still have an opportunity to do all those things but the doors are closing rapidly. FATCA, coming into effect on July 1, 2014 will be the first major door to close. For that reason, if you still have a sizable amount of assets inside the US, or any Western country, you should consider attending the Crisis Conference in Cabo one month from today to find out how not to get Cyprused… or, now, Ukrained.

3 thoughts on “Capital Controls And 200% Price Hikes In Ukraine – And Ukraine Is In Better Shape Than The US!”