– DNA Analysis Of Paracas Elongated Skulls Released. The Results Prove They Were Not Human

Karen Hudes: We’re Running Out of Time! We’re Dealing with Whether We Can Continue as Humanity

“The group that’s behind the network of control, one of these groups are hominids, they’re not human beings. They are very smart, they are not creative, they are mathematical. They had a much stronger force in the earlier ice-age. They have elongated skulls, they may produce offspring in mating with female humans, but that offspring is not fertile. We live in a world of secret societies, and secrets, and the information that ought to be public is not public.”

These are some of the shocking statements that came from Karen Hudes shortly after gaining attention for being a credible world bank whistleblower, stating that the world is in a “currency war,” that the Federal Reserve continues to print money and if they keep going at the pace they are on, other countries will no longer accept this currency.Much of what she has to say corroborates with ancient historical and archeological evidence, as well as modern day disclosures of other strange phenomenon, like UFOs, secret societies and more. For someone like this to gain credibility as a World Bank whistle-blower and then all of a sudden make a comment like this is quite shocking.

There is an enormous amount of growing evidence out there to suggest we are not alone, and that we have indeed been visited.  In the above interview with Red Ice Radio, Karen goes on to say:

Karen held her senior position at the World Bank for twelve years before deciding to blow the whistle on the World Bank and corruption within it. She studies law at Yale Law School and economics at the University of Amsterdam. She worked in the US Export Import Bank of the US from 1980-1985 and in the Legal Department of the World Bank from 1986-2007. She established the Non-Governmental Organization Committee of the International Law Section of the American Bar Association and the Committee on Multilateralism and the Accountability of International Organizations of the American Branch of the International Law Association.

While she was working at the World Bank, she happened to uncover a lot of corrupt activities. It got to the stage where she could no longer keep quiet about the corruption and she followed the proper procedures to report her findings. She first went to the World Banks Evaluation Department and country directors, and then to the U.S. Treasury Department and even the United States Congress.

All of her requests were ignored, and in some cases, completely covered up.

So she went public.

Over the last few years she got involved with a group of whistle blowers and started connecting the dots. She found that the corruption wasn’t just at the World Bank, but was woven throughout the fabric of the entirety of the global financial and political systems. She has labelled the situation a ‘global conspiracy’.

Twenty three minutes into this interview is when Karen Hudes starts discussing the information surrounding what may relate to Courtney Brown’s Announcement.

Future Money Trends: “Who is calling the shots at the Vatican. I am assuming it’s not the pope.”Karen Hudes: “Well, there is something called the black pope but that’s umm… that’s not the ultimate reason why we have been in the fix that we are in. What we have found out, and this sounds implausible, but it’s absolutely correct, the fact that its been held in secret doesn’t mean that it’s not true. It is true.

There is a second species on this planet.

They are not extraterrestrial, they are very much with us, they made maps in the previous ice age. The remnants of their civilizations are all over the place. A lot of times along the coast its submerged because the umm… amount, the sea level has gone up by 400 meters, but this group has large brains. They are very distinct from homo sapiens. 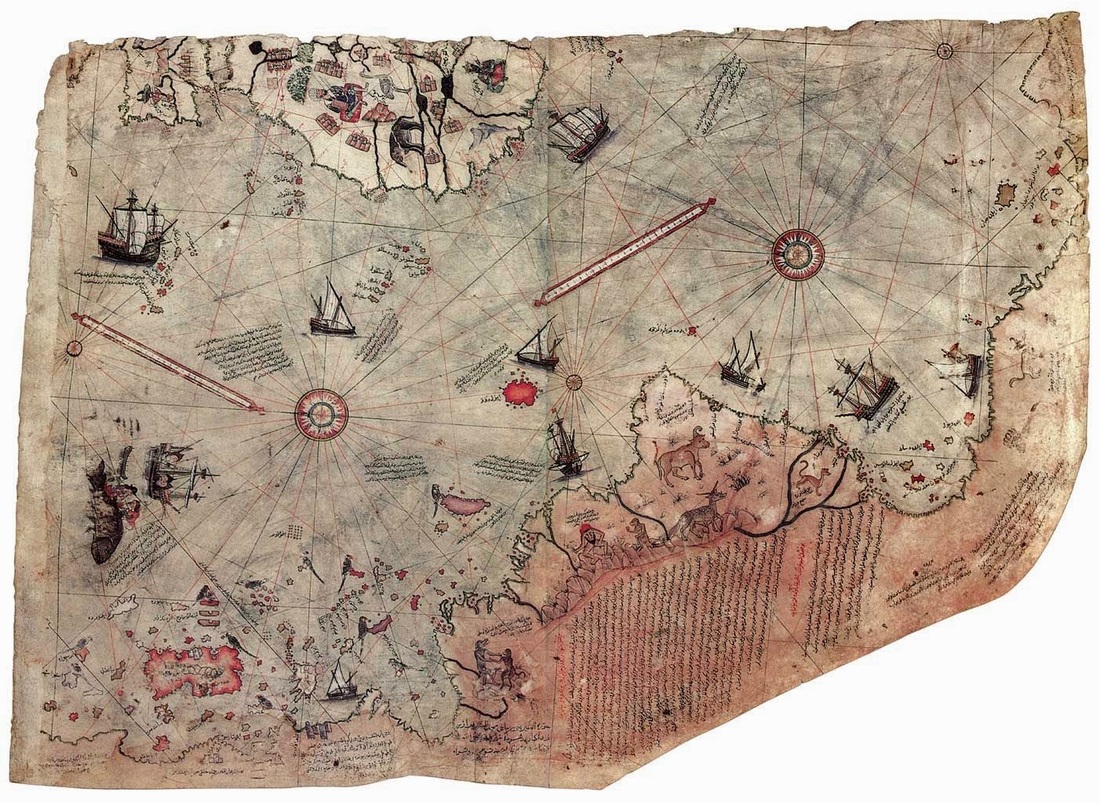 Charles Hapgood’s book ‘Maps of the Ancient Sea Kings’, Graham Hancock’s book ‘Fingerprints of the Gods’ and Rand & Rose Flem-Ath’s book ‘When the Sky Fell: In search of Atlantis’ all mention the Peri Reis maps which depict the Antarctic perfectly mapped, ice free, which could make the maps as old as 11,000BC (I own all of these books)Their DNA is so different that if the two species mated, their offspring would be infertile and we know this because their DNA was just tested. They have skulls all over the place because they have been on Earth with us, but after the ice age there weren’t that many of them. And so they have been hiding and one of the places they have been hiding is in the Vatican. That’s why the Vatican are wearing those miters. It turns out thats also what the high priests wore in the early beginnings of Judaism. 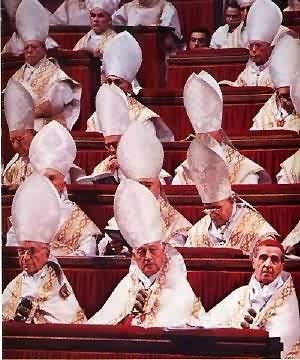 Moses was actually Akhenaten who was a Pharaoh. They know this because the papaira which was taken from one of the pyramids talks about this. The people that were doing archaeology in Israel know this, and the reason is that not only Homo Capensis trying to keep human beings under control by divide and conquer, using our money system, they have also been doing this with our religion. 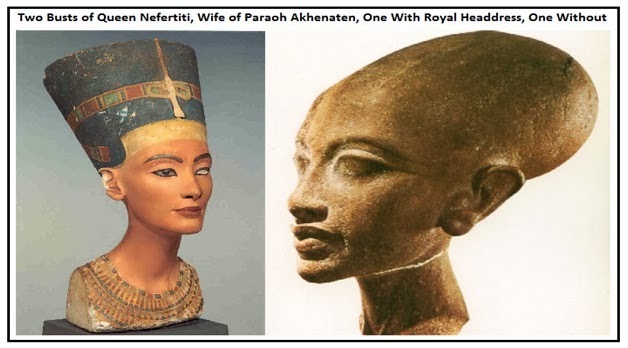 Organised religion. Trying to get human beings to hate people of different faiths so that they will kill each other off, so that the people in the back, manipulating human beings, could… what can I say, could use us like cattle. That’s what’s been going on through our history.” Future Money Trends: “Okay Karen, your an attorney, you worked for the World Bank for 20 years, what your saying is on the fringe of conspiracy, it sounds crazy so… I mean obviously you have had to come to terms with this. What have you seen that has made you so confident to actually say this stuff publicly?” 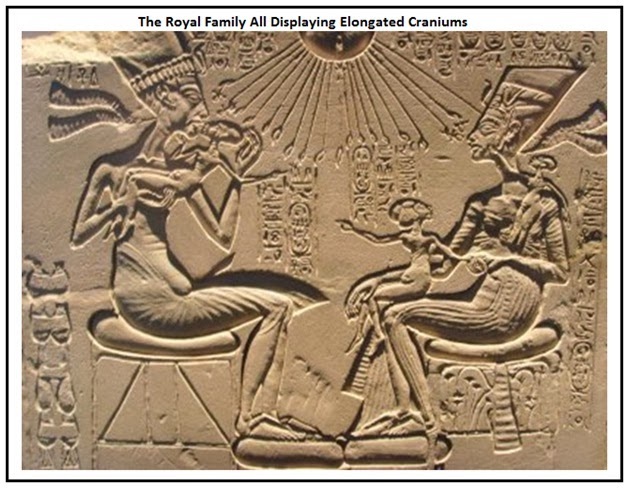 A bas relief of the Pharaoh Akhenaten and wife Queen Nefertiti with their three children, all with elongated craniums. Source

Karen Hudes: “Because they have been going to meetings. I sent an email to a fellow in Portugal and the next day he went to a meeting of Bankers and he sent me back an email saying that at that meeting there had been a big skulled individual with bright blue eyes.  Another person in touch with Doctor Edward Spencer, who is a retired neurologist, he’s the one who started telling me about this. A friend of his was in Egypt and saw these homo (cepranensis?) running around. They are umm… their skulls are all over the planet. It’s not a conspiracy theory. Just because this group likes to hide and likes to accuse people of having conspiracy theories doesn’t make these facts (raw?), they are facts.”

The whole interview is worth listening to if you have the time, as the other areas that Karen Hudes discusses actually do make a lot of sense, even though for some people they may seem a bit extreme or very ‘out there’. As with any source, a good way to examine the credibility is to look at all areas being discussed and search out if there are truths that we may already understand or accept. At the end of this article I will list the other subjects Karen Hudes brings up.

I will now again mention the webbot forecast from Clif High’s webbot report ‘The Shape of Things to Come, Volume 1, issue 1‘ from September the 30th 2012, as this information that Karen Hudes discusses actually resembles the webbot prediction in a stronger way than others.

There is a period of time predicted where there are major food shortages in the US which causes possible rioting or protest situations. What causes the shortages? Clif mentions that the cause could be related to a number of elements such as a economic collapse, false flag events, strange things in the sky that seem invisible or cloaked and extraterrestrial activity.

These documents are said to show strong evidence towards humanity being a genetic subject and will change the way we look at human history and its evolution. The evidence will show that extraterrestrials have been involved with the creation of life on earth. This information is based upon past civilisations as well, in connection to that. This in turn will cause a breakdown in the various religions around the world over the weeks after the information has been released.

“I have gone to something called the International Organization of Supreme Audit Institutions and I have been collaborating with all the whistle blowers of the world… and we’re bound and determined that we’re going to get this corruption taken care of.”

This group of whistle-blowers that she is a part of, perhaps Courtney Brown is also part of this group and that they are planning to make a combined release of evidence and information towards not only what Karen Hudes has mentioned within this interview, but also other information. The recent DNA results on the Paracas elongated skulls would be a good addition to any evidence presented.

With relation to the rest of the interview with Future Money Trends, Karen Hudes also goes into the following topics,

“We have solved the mystery as to why humanity has had nothing but wars and terrible problems… why we’re always at each other’s throats.” …

“A very accurate… it’s called the power transition model… it uses political science and computer modelings… that model is 90% to 95% accurate… and it is predicting that the corruption that has been plaguing the world, it turns out for millennia, is coming down… a lot of people call that the Matrix, a lot of people call that the banksters… it’s actually much, much more. The fact that he [NSA Whistle Blower Edward Snowden] is getting coverage on the mainstream media should be letting people know that he is part of the Matrix, because the mainstream media is owned and controlled by the same group that are the owners of the Bank for International Settlement… that is a scam.” …

“People are supposed to have currency that’s issued by their governments directly which doesn’t carry interest. That is what John F. Kennedy was trying to do and the reason why he was assassinated. That’s what Lincoln was doing with the Greenbacks… that’s why Lincoln was assassinated…” …$

“The banks that are Too-Big-To-Fail… that’s really one banking cartel… and that group is going around buying up politicians… there are secret societies like the Knights of Malta and they’re promoting people and making sure that those people become the gatekeepers.