Widening income disparity has been a feature of many advanced and developing economies for the past few years and has myriad investment implications. As we noted yesterday, the USA is at levels of income disparity not seen since the roaring 20s (and by some counts worse) but how does that stack up to the rest of the world? Fed fans will be proud to say that once again USA in Number 1… in global income inequality.

Consumer-facing businesses are naturally among the most directly exposed to shifts in income distribution, while new revenue opportunities in welfare areas, such as education, should emerge as policy focus increases on solutions to ease income inequality. On the other hand, steps taken by governments to restore more equitable income distribution can foster new risks for corporates, in the form of higher taxes, restricted access to global goods, talent and capital. 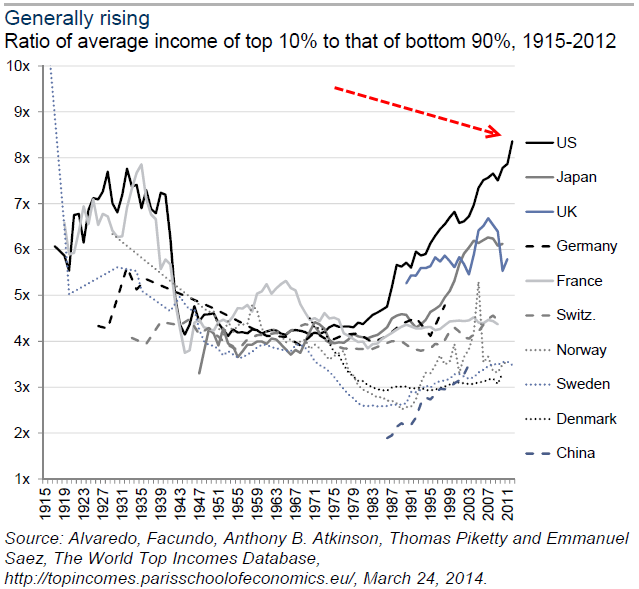 Where has income inequality changed?

In most countries it has widened over the past two decades, and in a few it has narrowed from high levels (Latin America). But global income inequality between people of different countries has narrowed, as China’s and India’s middle-class income growth has outpaced the West’s.

What has caused this?

Globalisation and technology have been two drivers: wages for highly skilled labour expanded as demand exceeded supply, while lower skilled labour has been arbitraged globally, damaging middle incomes in DMs.

What are the investment opportunities?

Providers of education and broader welfare, and consumer-facing companies that are favourably exposed to changes in real growth for different income levels (trading down to discounters) and ongoing income growth for higher earners (prime residential real estate, high-end retail and luxury)

Restricted people, capital and goods flow; higher taxes, either indirect or direct for individuals and corporates. An exodus of talent from countries with less opportunity can have long-term negative consequences too.

There are also numerous risks that arise from responses to wide income and wealth disparity, both at a micro and macro level. There is an element of self-fulfilling prophecy here – the very high focus on inequality means it becomes a very important issue and policy challenge. And in democracies, voters can force the hand of the government to act.

A minimum wage, or incorporating limits on pay, are perhaps the most direct way of shrinking the range of income distribution in an economy, given that they apply a floor or a cap to incomes.

If globalisation is seen as one of the causes of widening income inequality then it is possible that deglobalisation is seen as a solution to it. i.e. limiting the flows of goods, people and capital across borders. This would be damaging to many industries and companies, particularly those that have invested much capital in global assets and facilities.

Taxation is the most commonly used means of redistribution and there is much debate here around its effectiveness and fairness. 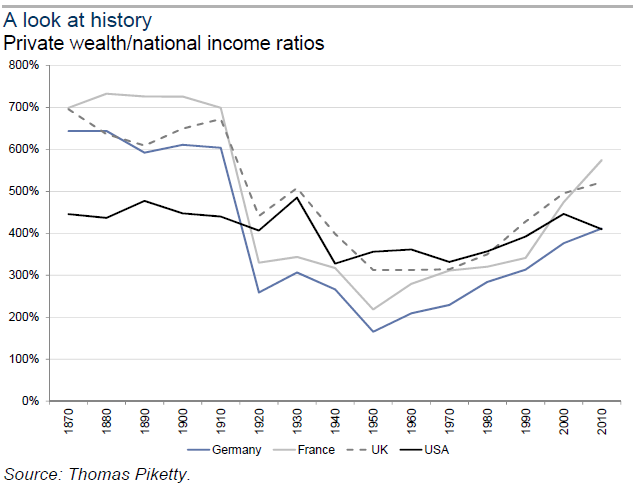 A sweeping look at longer-run history tells us that income disparity has been much higher in earlier societies. England in the early 19th century had a GINI of around 50% as a consequence of the industrial revolution, while if we look further back, Holland had even greater inequality (estimated at 55%) prior to the Dutch Revolt in the 16th century. Today, South Africa is the only country with a population of more than 10 mn with a GINI co-efficient higher than that. But, in terms of assessing where sustained and rising inequality may result in social unrest, historical ranges may be less relevant now, as the spotlight of transparency shines brighter thanks to the ubiquity of information and in particular the torchlights of social media.

And the myriad connections and speed of communication means that people can come together quicker and organise themselves more efficiently. Protests can also leap across borders with greater alacrity and the beacons of protest can form a global chain within hours

Of course, it seems Goldman is a little shy of pointing out the true driver of this…

As a reminder, we explained before how Central Banks are among the major culprits…

Submitted by Frank Hollenbeck via the Ludwig von Mises Institute,

The gap between the rich and poor continues to grow. The wealthiest 1 percent held 8 percent of the economic pie in 1975 but now hold over 20 percent. This is a striking change from the 1950s and 1960s when their share of all incomes was slightly over 10 percent. A study by Emmanuel Saez found that between 2009 and 2012 the real incomes of the top 1 percent jumped 31.4 percent. The richest 10 percent now receive 50.5 percent of all incomes, the largest share since data was first recorded in 1917. The wealthiest are becoming disproportionally wealthier at an ever increasing rate. 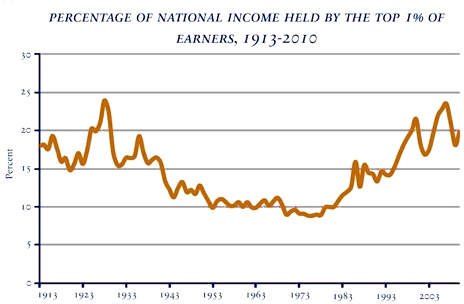 Most of the literature on income inequalities is written by professors from the sociology departments of universities. They have identified factors such as technology, the reduced role of labor unions, the decline in the real value of the minimum wage, and, everyone’s favorite scapegoat, the growing importance of China.

Those factors may have played a role, but there are really two overriding factors that are the real cause of income differentials. One is desirable and justified while the other is the exact opposite.

In a capitalist economy, prices and profit play a critical role in ensuring resources are allocated where they are most needed and used to produce goods and services that best meets society’s needs. When Apple took the risk of producing the iPad, many commentators expected it to flop. Its success brought profits while at the same time sent a signal to all other producers that society wanted more of this product. The profits were a reward for the risks taken. It is the profit motive that has given us a multitude of new products and an ever-increasing standard of living. Yet, profits and income inequalities go hand in hand. We cannot have one without the other, and if we try to eliminate one, we will eliminate, or significantly reduce, the other. Income inequalities are an integral outcome of the profit-and-loss characteristic of capitalism; they cannot be divorced.

Yet, the middle class has been sinking toward poverty: that is not climbing the ladder. Over the period between 1979 and 2007, incomes for the middle 60 percent increased less than 40 percent while inflation was 186 percent. According to the Saez study, the remaining 99 percent saw their real incomes increase a mere .4 percent between 2009 and 2012. However, this does not come close to recovering the loss of 11.6 percent suffered between 2007 and 2009, the largest two-year decline since the Great Depression. When adjusted for inflation, low-wage workers are actually making less now than they did 50 years ago.

This brings us to the second undesirable and unjustified source of income inequalities, i.e., the creation of money out of thin air, or legal counterfeiting, by central banks. It should be no surprise the growing gap in income inequalities has coincided with the adoption of fiat currencies worldwide. Every dollar the central bank creates benefits the early recipients of the money—the government and the banking sector — at the expense of the late recipients of the money, the wage earners, and the poor. Since the creation of a fiat currency system in 1971, the dollar has lost 82 percent of its value while the banking sector has gone from 4 percent of GDP to well over 10 percent today.

The central bank does not create anything real; neither resources nor goods and services. When it creates money it causes the price of transactions to increase. The original quantity theory of money clearly related money to the price of anything money can buy, including assets. When the central bank creates money, traders, hedge funds and banks — being first in line — benefit from the increased variability and upward trend in asset prices. Also, future contracts and other derivative products on exchange rates or interest rates were unnecessary prior to 1971, since hedging activity was mostly unnecessary. The central bank is responsible for this added risk, variability, and surge in asset prices unjustified by fundamentals.

The banking sector has been able to significantly increase its profits or claims on goods and services. However, more claims held by one sector, which essentially does not create anything of real value, means less claims on real goods and services for everyone else. This is why counterfeiting is illegal. Hence, the central bank has been playing a central role as a “reverse Robin Hood” by increasing the economic pie going to the rich and by slowly sinking the middle class toward poverty.

Janet Yellen recently said “I am hopeful that … inflation will move back toward our longer-run goal of 2 percent, demonstrating her commitment to an institutionalized policy of theft and wealth redistribution.” The European central bank is no better. Its LTRO strategy was to give longer term loans to banks on dodgy collateral to buy government bonds which they promptly turned around and deposited with the central bank for more cheap loans for more government bonds. This has nothing to do with liquidity and everything to do with boosting bank profits. Yet, every euro the central bank creates is a tax on everyone that uses the euro. It is a tax on cash balances. It is taking from the working man to give to the rich European bankers. This is clearly a back door monetization of the debt with the banking sector acting as a middle man and taking a nice juicy cut. The same logic applies to the redistribution created by paying interest on reserves to U.S. banks.

Concerned with income inequalities, President Obama and democrats have suggested even higher taxes on the rich and boosting the minimum wage. They are wrongly focusing on the results instead of the causes of income inequalities. If they succeed, they will be throwing the baby out with the bathwater. If they are serious about reducing income inequalities, they should focus on its main cause, the central bank.

In 1923, Germany returned to its pre-war currency and the gold standard with essentially no gold. It did it by pledging never to print again. We should do the same.

1 thought on “The US Is #1 … In Global Income Inequality”