Hot on the heels of what S&P said was not a “politically motivated” shift to rating watch, Moody’s (who did not downgrade the USA and are not currently in a lawsuit over such terrible misrepresentations) has decided now is the time to put Russia on rating downgrade watch. The decision was triggered by 3 key factors: the weakening of Russia’s economic strength, potential shifts in investor sentiment, and susceptibility to event risk.

The decision was triggered by the following factors:

1.) The weakening of Russia’s economic strength, as the conflict with the Ukraine and the related uncertainty over future policy actions further weigh on Russia’s already impaired investment climate and medium-term economic outlook.

2.) The upward revision in Moody’s assessment of Russia’s susceptibility to event risk, owing to the heightened geo-political risk implied by the potential for the conflict in the Ukraine escalating further.

During its ratings review, Moody’s will seek to obtain greater clarity on (1) the extent to which the current crisis will exacerbate the country’s medium-term growth challenges; (2) the level of risk that the crisis escalates further; and (3) the consequent impact on Russia’s economy, public finances and external position.

Should the review lead to a downgrade, the most likely outcome would be a one-notch adjustment. However, Moody’s would consider a downgrade of more than one notch were the probability to rise of events occurring which could lead to more severe economic shocks. Moody’s would consider confirming Russia’s sovereign rating at its current Baa1 level if the current tensions were to dissipate and if a possible resolution of the crisis were to emerge with the potential to improve the country’s growth outlook.

Russia’s Prime-2 short-term debt rating is not affected by this review and remains unchanged.

RATIONALE BEHIND REVIEW FOR DOWNGRADE

The first driver behind the decision to place Russia’s sovereign rating on review for downgrade is the potential for the current crisis to further exacerbate the recent weakening of the country’s economic strength and medium-term growth potential. Moody’s already expects that the increased economic uncertainty triggered by the conflict with Ukraine will contribute to an economic GDP contraction of around -1.0% in 2014, against pre-crisis expectations of growth of around 2%.

Moody’s expectation that Russia will slide into recession comes against the background of an ongoing deceleration in GDP growth since September 2011 that reached a low of 1.2% year-on-year in Q3 2013. Factors responsible for this deceleration — namely, sluggish consumption growth, stagnating investment and a weak external environment — will be further exacerbated by the elevated political and economic uncertainty.

The rating agency believes that the current crisis could significantly dampen investor sentiment for several years to come by adding to existing deterrents to investment posed by Russia’s weak rule of law and high levels of corruption. This could further damage the country’s economic outlook given its large investment needs. It could also further constrain its ability to diversify the economy away from overreliance on oil and gas. Overall, the crisis with Ukraine could therefore further weaken Russia’s medium-term growth prospects, which had already been lowered by the Russian authorities in 2013.

— SECOND DRIVER: RUSSIA’S INCREASED SUSCEPTIBILITY TO EVENT RISK AS A RESULT OF THE CONFLICT WITH UKRAINE

The second driver underlying the review for downgrade is Moody’s concern regarding the country’s rising susceptibility to political and financial event risk, primarily driven by the risk of further escalation of hostilities.

Moody’s acknowledges Russia’s large foreign-currency reserves and limited external debt repayments and the current strength of the government’s balance sheet. However, wider economic sanctions and potential countermeasures by Russia could, were they to materialise, erode those financial buffers. That said, the agency notes that the exposure of the corporate and banking sectors to external refinancing risks this year appears to be manageable.

FOCUS OF THE REVIEW

During its ratings review, Moody’s will seek to obtain greater clarity on (1) the extent to which the current crisis will exacerbate the country’s medium-term growth challenges, (2) the level of risk that the crisis escalates still further; and (3) the resilience of Russia’s economy, public finances and external position to such a scenario.

In addition, Russia’s oil funds (equivalent to around 9% of GDP) provide a cushion to a potential fall in oil prices and any associated shortfall of revenues or problems with market access. Russia also compares well to its rating peers in terms of external metrics. While the country’s current account balance has declined, it remains in surplus. Russia’s external vulnerability indicator, which measures a country’s short-term and currently maturing long-term external obligations in relation to its foreign exchange reserves, compares favourably to rating peers.

WHAT COULD MOVE THE RATING DOWN/UP

Moody’s would downgrade Russia’s sovereign rating were it to conclude that the financial, diplomatic and political consequences of the crisis will materially undermine Russia’s medium-term economic strength, whether by further discouraging foreign investor sentiment, undermining exports or weakening domestic consumption and investment still further. In that event, the most likely outcome would be a one-notch downgrade given the current state of the crisis. However, Moody’s would consider a downgrade of more than one notch were the probability of more severe economic shocks to rise.

While an upgrade is unlikely over the medium term given the current review for downgrade, Moody’s would confirm Russia’s sovereign rating at its current Baa1 level were the crisis to stabilise, current tensions to dissipate and a possible resolution of the crisis with Ukraine to emerge, given that this could be conducive to improving the country’s growth outlook and investor confidence.

On 25 March 2014, a rating committee was called to discuss the rating of the Russia, Government of. The main points raised during the discussion were: The issuer’s economic fundamentals, including its economic strength, have decreased. The issuer has become increasingly susceptible to event risks. 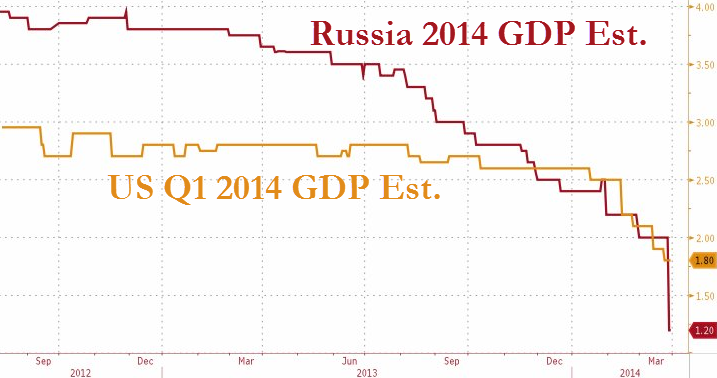