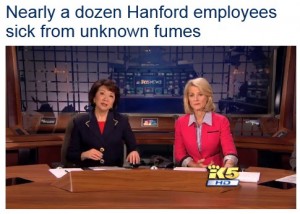 KING 5 News, Susannah Frame, Mar. 25, 2014: Hanford sources tell the KING 5 Investigators that at least 11 people have gotten sick in the last six days after breathing in toxic fumes while working near underground tanks holding hazardous nuclear waste. […] The first two workers to fall ill in the last week breathed in fumes that “tasted like copper” on Wednesday, March 19. […] both are still suffering effects of breathing in the vapors: headache, chest pain, difficulty breathing, nose bleeds and sore throats. One employee has coughed up blood. Sources who work in this area of Hanford tell KING […] this is “extremely unusual” to have symptoms persist this long. The next batch of employees to get sick breathed in fumes today, Tuesday, March 25. Four WRPS employees breathed in vapors at 9:00 am and were immediately transported to a medical facility […] the tank farm, identified as AY-AZ farm was evacuated […] Immediately afterward two employees from what’s known as the industrial hygiene department of WRPS [Washington River Protection Solutions], who monitor chemical exposures, were sent out to investigate and they too, had reactions to the fumes and were transported to the onsite medical facility. […] Sources tell KING 5 that three additional employees got sick from ingesting fumes later on Tuesday. These WRPS employees were working in a different portion of the tank farm […] about 8 to 10 miles from the AY-AZ farm. That location was also deemed a Vapor Control Zone and was evacuated. Sources say two were transported to the hospital by ambulance and one was transported to the HPMC.

KING 5 News transcript, Mar. 25, 2014 (h/t MOXNEWS): A rash of Hanford workers have needed medical attention over the last week after ingesting unknown toxic fumes […] In the last week, get this, 11 Hanford workers, 11 people have wound up in the hospital or at the onsite medical facility there at Hanford after breathing in harmful chemicals. This is an unusually high number of employees, of course, getting sick from vapors at Hanford in just one weeks time. […] We talked to several workers at Hanford today that were very upset because they say there is not any monitoring systems.