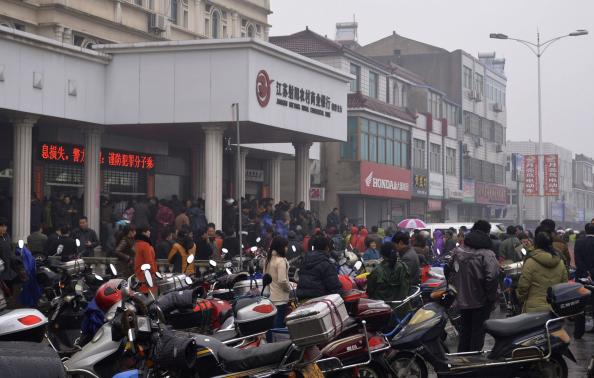 Hundreds of people rushed on Tuesday to withdraw money from branches of two small Chinese banks after rumors spread about solvency at one of them, reflecting growing anxiety among investors as regulators signal greater tolerance for credit defaults.

The case highlights the urgency of plans to put in place a deposit insurance system to protect investors against bank insolvency, as Chinese grow increasingly nervous about the impact of slowing economic growth on financial institutions.

Regulators have said they will roll out deposit insurance as soon as possible, without giving a firm deadline.

The semi-official China News Service quoted the bank’s chairman, Zang Zhengzhi, as saying it would ensure payments to all the depositors. The report did not say how the rumor originated.

Chen Dequn, a resident in Yandong, just outside Yancheng, said she saw a crowd of about 70 to 80 people gathering in a branch of Sheyang Rural Commercial Bank in her town on Tuesday.

“At the moment there are about 70 or 80 people in there. Normally there’d only be about 10,” she told Reuters by telephone.

Officials at another small bank, Rural Commercial Bank of Huanghai, said they had faced similar rushes by depositors, triggered by rumors of insolvency at Sheyang.

“We will be holding an emergency meeting tonight,” an official at the bank’s administration office told Reuters, but declined to comment further.

Why Yancheng investors suddenly lost confidence in the security of their bank deposits is not clear, given that the Sheyang bank is subject to formal reserve requirements, loan-to-deposit ratios and other rules to ensure it keeps sufficient cash on hand to meet demand.

Bank failures in China are virtually unknown, as Chinese banks are considered to operate under an implicit guarantee from the government.

“It’s true that these rumors exist, but actually (the bank going bankrupt) is impossible. It’s a completely different situation from the problem with the cooperatives,” said Zhang Chaoyang, an official at the propaganda department of the Communist Party committee in Tinghu district, where the bank branch is located.

Zhang was referring to an incident that rattled depositors in Yancheng in January, when some rural cooperatives — which are not subject to the supervision of the bank regulator — ran out of cash and locked their doors.

China’s central bank governor said this month that deposit rates are likely to liberalized in one to two years – the most explicit timeframe to date for what would be the final step in freeing up banks to set their own interest rates.

It is widely expected to introduce a deposit insurance scheme before freeing up deposit rates, to protect savers in case a liberalized market puts major strains on smaller banks and alarms the public. Analysts also expect the controls on deposit rates to be lifted gradually. Is China’s debt nightmare a province called Jiangsu?

Investors both in China and globally have taken note of Beijing’s recent decision to allow China’s first domestic bond default. Chaori Solar Energy Science and Technology Co Ltd missed a bond coupon payment in March. Officials have indicated publicly that they believe other defaults are inevitable but do not believe such incidents will lead to systemic risk.

In the past, domestic bond issuers were routinely bailed out by local governments and banks, and the willingness of regulators to let Chaori miss interest payments negatively impacted rates in Chinese offshore credit markets.

More recently, media also reported a heavily indebted real estate developer in Zhejiang province was at risk of defaulting on 3.5 billion yuan ($565 million) worth of loans — a situation that has yet to be resolved.

When contacted by Reuters by phone on Tuesday, an official at the Jiangsu Sheyang Rural Commercial Bank branch hung up, saying she was busy.

An official at the administrative office at Jiangsu Sheyang Rural Commercial Bank said the bank would publish a statement shortly. On its website, the bank says it is capitalized at 525 million yuan ($85 million) and had total deposits of 12 billion yuan as of end-February,

Officials at the Jiangsu branch offices of the China Banking Regulatory Commission (CBRC) declined to comment. The Yancheng branch of CBRC and the propaganda offices in Yancheng city and Sheyang county did not answer calls seeking comment. ($1=6.1888 Chinese yuan)