This is revelatory. Not only could it co-explain the voracious fracking campaign being waged on the planet, but perhaps even the utilization of HAARP-type technology to create earthquakes in many parts of the world.

It would make a lot of sense. That our planet is being “undermined” is no secret. The wanton destruction of our home is unfathomable. While oil and gas extraction appears to be the primary goal of fracking, this research tells us somewhat of a different, potential reason.

See for yourself if this doesn’t make you wonder:

Gold could be deposited almost instantaneously in the Earth’s crust during earthquakes, say Australian researchers.

The researchers have found gold is formed when an earthquake widens a fluid-filled rock fracture, causing a drop in pressure, which in turn allows gold dissolved in the fluid to rapidly leach out.

Their study, reported in the journal Nature Geoscience, explains how the metal changes from a soluble state to concentrated deposits.

“[This process] may underpin the formation of up to 80 per cent of the world’s gold deposits,” they write.

Much of the world’s gold is found in quartz veins that formed during periods of mountain building up to three billion years ago and was deposited by large volumes of water along deep, seismically active faults.

The veins were formed under fluctuating pressures during earthquakes, but until now, the magnitude of these pressure shifts and how they influence the formation of gold was unknown.

They found that a sudden drop in pressure in the fracture causes the fluid inside to expand and vaporise — a process known as flash vaporization.

“The change in the volume of the fracture causes a change in fluid pressure,” explains Weatherley.

“The fluid becomes supersaturated at the low pressures and the various minerals that are dissolved will precipitate out very rapidly.”

Different minerals are known to precipitate out of fluids at specific pressures.

Weatherley and Henley found the ability of minerals to dissolve out of the water grew quickly even for relatively small earthquakes.

While a single event may not deposit significant levels of gold, successive earthquakes in the same area can cause a build up of these deposits within the fracture eventually leading to economically viable gold concentrations, say the researchers.

The bulk of gold mined today has been found where deposits are exposed on or near the surface.

According to Weatherley, geologists believe they’ve explored the majority of the dry part of the planet, and now have to start looking for deposits which are hidden in deeper parts of the crust. 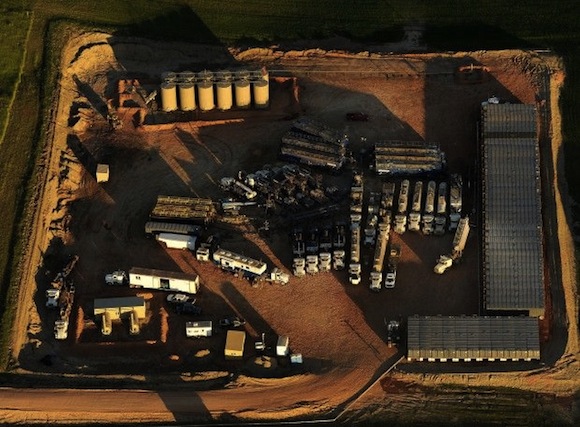 What are these fracking storage units, tanks and tankers really all about?

The intrinsic value of gold is a much researched anomaly. From the Sumerian texts telling us it was the main mission of the Anunnaki to acquire this element to save their planet, to the ancient science of alchemy to create gold, and then for gold to be considered the basis for the completely false economic system the world runs on, it is a major factor in human evolution. The lust for this metal has driven humanity headlong into chaos and selfishness.

The fact that, according to this research, it is a repeated earthquake process that produces the gold, directly points to the possibility that fracking may be involved in this mining activity.

Surely something to think about.

We’ll see how far this discovery goes, but man, it sure has me “just wondering”.

2 thoughts on “Are They Fracking for Gold?”