Friday’s news that the Turkish government had banned its citizens from accessing Twitter was depressing but an opportunity to be embraced. Forewarned is forearmed, and the fact that Turks are learning how to beat censorship with VPNs and DNS tricks better prepares them for the future.

Two days ago on the campaign trail ahead of end-of-March elections, Turkish Prime Minister Tayyip Erdogan showed his Internet naivety by doing something extremely silly. In the midst of a corruption scandal he first threatened and then carried through with an outright ban of Twitter.

“I don’t care what the international community says at all. Everyone will see the power of the Turkish Republic,” Erdogan said on Thursday.

Angry that Twitter did not respond to requests by Turkish courts to remove material that showed him in a bad light, Erdogan swung the banhammer and by Friday everything was in place. Turkish visitors to Twitter were greeted with notices displayed by their ISPs indicating that Twitter had been blocked by court order.

“Because there was no other choice, access to Twitter was blocked in line with court decisions to avoid the possible future victimisation of citizens,” Turkish telecoms watchdog BTK said on Friday.

What followed was anger from citizens, then delicious payback against yet another government trying – and ultimately failing – to artificially restrict access to information on the Internet.

Rather than bow to Erdogan’s wishes, Turkish citizens reacted in much the same that file-sharers around the world have done when sites such as The Pirate Bay were blocked by their ISPs. They took to the open web to spread the word on how to circumvent web censorship but in a fresh twist, they also took to the streets

The wonderful image below, ironically posted to Twitter itself, shows a poster on a Turkish street explaining how to change DNS settings to obliterate the Twitter ban. 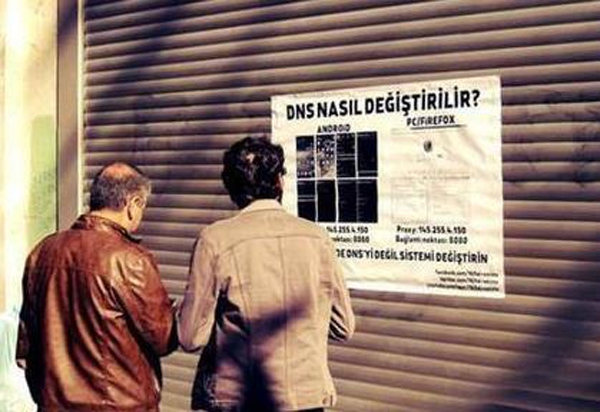 Another photograph, again posted to Twitter, shows graffiti on a housing block informing people of the IP addresses used by Google’s DNS service rather than the ‘infected’ ones offered by local ISPs. 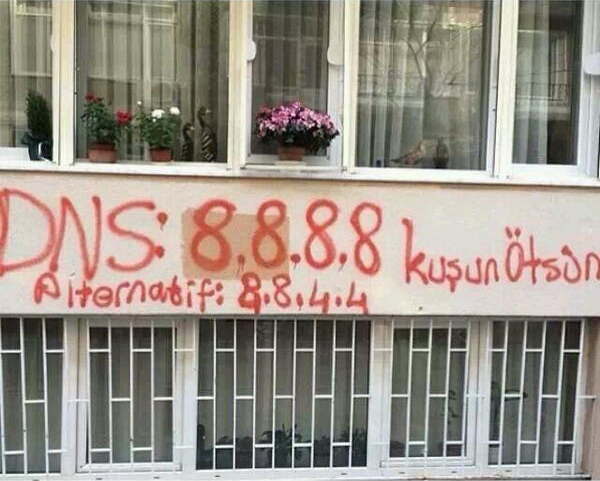 But while these images will be a delight to anti-censorship advocates everywhere, it was online that the real battle was taking place. Here at TF we noticed an unusual level of interest from Turkish visitors in our latest VPN article and then later in the day the effect on VPN takeup was confirmed by the company behind Hotspot Shield.

AnchorFree CEO David Gorodyansky told WSJ that 270,000 Turkish users installed their software in one 12 hour period Friday versus around 10,000 on a normal day, a huge increase by any standards.

Torrent Freak spoke with Andrew Lee at Private Internet Access who explained that while his company does not track the identities or locations of its customers, there had definitely been an uptick in sign ups following the introduction of Twitter censorship in Turkey.

“More and more, we are seeing that censorship is a form of control that the weak use in an attempt to hang onto power. In addition to Turkey, we can also see this happening in China, the United Kingdom and other various countries,” Lee explained.

“Fortunately, the people of this world, including Turkey, are strong, and democracy will continue to stand. As such, the attempt to censor Twitter in Turkey has all but failed.”

This article began with the suggestion that censorship of the type imposed by Turkey is something to be embraced. Not welcomed, of course, but treated as an opportunity to gain knowledge on how the Internet works and how web blockades can be circumvented.

Those who think they can control the Internet and people’s right to communicate should be made to think again and in Turkey this week that point has been admirably made.

According to analysis site Zete.com, tweets in Turkey before the ban numbered 10 million a day – they now sit at 24 million.

Update: According to a local report, Turkey has now appears to have blocked Google’s DNS, although other sources say that this is an actual network issue.