Fariq Abdul Hamid was filmed for a segment on CNN flying from Hong Kong to Kuala Lumpur in Malaysia. Hamid, 27, was a co-pilot on Flight MH370, which mysteriously vanished on March 8.

A month before he was a co-pilot in a bizarre plane disappearance, Malaysia Airlines pilot Fariq Abdul Hamid was happy to finally be getting his chance to fly a Boeing 777-200.

CNN aviation expert Richard Quest had coincidentally filmed a training session for the 27-year-old co-pilot of the Malaysia Airlines flight that mysteriously vanished after taking off March 8 from Kuala Lumpur in Malaysia en route to Beijing.

Hamid told Quest he had 2,700 hours of flight experience and was transitioning to a wider aircraft. When asked about flying, the young pilot told Quest simply that he “just loved it.”

“It was a wonderful experience, particularly flying the larger big triple 7 plane that we were onboard,” he said.

Hamid was the far less experienced than his co-pilot in the doomed flight. In the training on Feb. 19 he flew with a training captain and flew the Boeing 777-200, the same type of aircraft that is now missing, from Hong Kong to Kuala Lumpur.

Hamid had done extensive training in flight simulators and conducted a “textbook landing” on that day, according to his trainer, Quest said. 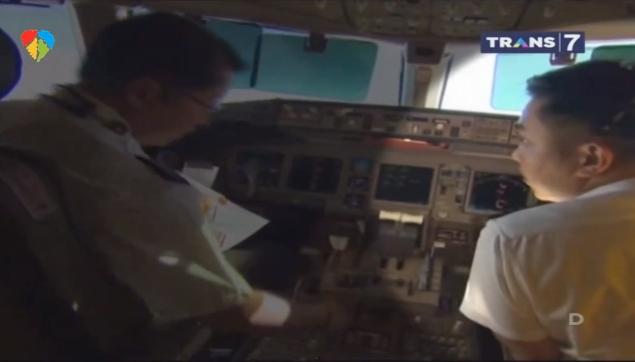 Malaysia Airlines pilot Fariq Abdul Hamid Malaysian (right) was filmed training during a report by CNN. He was a co-pilot on the airline’s currently missing plane.

“It was interesting to watch the way he brought the aircraft in to land,” Quest said.

Hamid joined the airline in 2007 and was flying with a much more experienced co-pilot Captain Zaharie Ahmad Shah, 53, who began working for Malaysia Airlines in 1981 and had more than 18,000 hours of flying experience.

A story surfaced recently that Hamid and another co-pilot plucked two women from a 2011 flight and entertained them in the cockpit, posing for pictures and smoking cigarettes while flying.

“They were friendly … they were very competent in what they were doing,” South African resident Jonti Roos told Australia’s “A Current Affair,” adding that in hindsight the whole experience was “possibly a little bit sleazy.”

The massive search for the plane was suspended Sunday while Malaysian government officials tried to identify new areas to search.

There is no indication of when the search will resume.