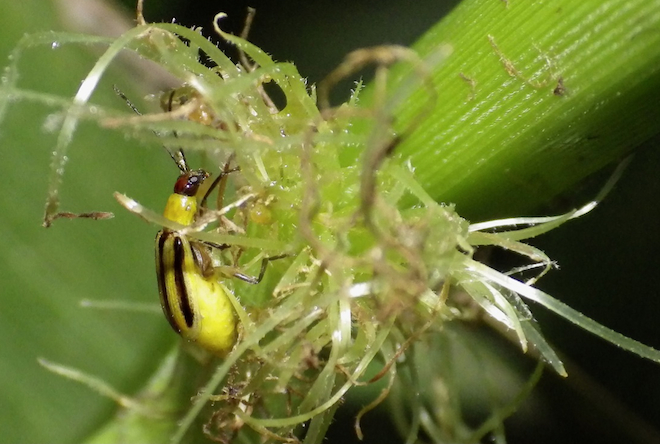 “Unless management practices change, it’s only going to get worse,” said Aaron Gassmann, an Iowa State University entomologist and co-author of a March 17 Proceedings of the National Academy of Sciences study describing rootworm resistance. “There needs to be a fundamental change in how the technology is used.”

First planted in 1996, Bt corn quickly became hugely popular among U.S. farmers. Within a few years, populations of rootworms and corn borers, another common corn pest, had plummeted across the midwest. Yields rose and farmers reduced their use of conventional insecticides that cause more ecological damage than the Bt toxin.

By the turn of the millennium, however, scientists who study the evolution of insecticide resistance were warning of imminent problems. Any rootworm that could survive Bt exposures would have a wide-open field in which to reproduce; unless the crop was carefully managed, resistance would quickly emerge.

Key to effective management, said the scientists, were refuges set aside and planted with non-Bt corn. Within these fields, rootworms would remain susceptible to the Bt toxin. By mating with any Bt-resistant worms that chanced to evolve in neighboring fields, they’d prevent resistance from building up in the gene pool.

But the scientists’ own recommendations — an advisory panel convened in 2002 by the EPA suggested that a full 50 percent of each corn farmer’s fields be devoted to these non-Bt refuges — were resisted by seed companies and eventually the EPA itself, which set voluntary refuge guidelines at between 5 and 20 percent. Many farmers didn’t even follow those recommendations.

Fast forward to 2009, when Gassmann responded to reports of extensive rootworm damage in Bt cornfields in northeast Iowa. Populations there had become resistant to one of the three Bt corn varieties. (Each variety produces a different type of Bt toxin.) He described that resistance in a 2011 study; around the same time, reports of rootworm-damaged Bt corn came in from parts of Illinois, Minnesota, Nebraska and South Dakota. These didn’t represent a single outbreak, but rather the emergence, again and again, of resistance.

‘A widespread increase in trait failure maybe just around the corner.’

In the new paper, Gassmann describes further incidents of Bt resistance in other parts of Iowa. He also found rootworms resistant to a second variety of Bt corn. Moreover, being resistant to one variety heightened the chances of resistance to another. That means corn engineered to produce multiple Bt toxins — so-called stacked varieties — won’t do much to slow the evolution of rootworm resistance, as was originally hoped.

Entomologist Bruce Tabashnik of the University of Arizona called Bt resistance “an increasingly serious problem,” and said that refuge sizes need to be increased dramatically and immediately. He and other scientists have pushed the EPA to double current refuge requirements, but so far without success.

Entomologist Elson Shields of Cornell University agrees. “Resistance was caused because the farmers did not plant the required refuges and the companies did not enforce the planting of refuges,” said Shields, who has written that “a widespread increase in trait failure may be just around the corner.”

In addition to increasing refuge sizes, farmers also need to vary the crops planted on their fields, rather than planting corn season after season, said Gassmann. Breaks in the corn cycle naturally disrupt rootworm populations, but the approach fell from favor as the high price of corn made continuous planting appealing. “Continuous corn is the perfect habitat for rootworm,” said Gassmann.

Shields also lamented the difficulty he and other academic scientists long experienced when trying to study Bt corn. Until 2010, after organized objections by entomologists at major agricultural universities forced seed companies to allow outside researchers to study Bt corn, the crop was largely off-limits. Had that not been the case, said Shields, resistance could have been detected even earlier, and perhaps stalled before it threatened to become such a problem.

“Once we had legal access, resistance was documented in a year,” Shields said. “We were seeing failures earlier but were not allowed to test for resistance.”

There’s a lesson to be learned for future crop traits, Shields said. Rootworm resistance was expected from the outset, but the Bt seed industry, seeking to maximize short-term profits, ignored outside scientists. The next pest-fighting trait “will fall under the same pressure,” said Shields, “and the insect will win. Always bet on the insect if there is not a smart deployment of the trait.”