This is, by the way, the same bill Gates that ‘admits vaccines are for depopulation’ …

…. and wants you to believe in climate change & global warming to make the people pay even more taxes that will land solely in the pockets of the elitists.

I have no doubt that climate changes are happening all around the planet for many different reasons that are not (or only very rarely) mentioned by the corporate media, but making you pay even more money to the elitists will not have any positive impact on the climate, only a negative impact on your wallet.

And if this criminal of the worst kind is pushing the global warming & climate change agenda, which will mainly be benefitting the banksters, then all of your alarm bells should ring.

– Here’s What the Richest Man in the World Thinks About Snowden and NSA Surveillance (Liberty Blitzkrieg, March 14, 2014):

So Bill Gates recently gave an interview to Rolling Stone magazine. The vast majority of the interview focused on his philanthropic efforts, with a particular focus on poverty and climate change. However, several questions were brought up on illegal NSA surveillance in general, and Edward Snowden in particular.

His answers reveal one of the biggest problems facing America today, which is the fact that the billionaire class as a whole does not question or rock the boat whatsoever. They criticize only when it is convenient or easy to do so, never putting themselves at risk for the sake of civil liberties and the Constitution.

In mosts cases, this is due to the fact that they themselves are the characters pulling the strings of the political class in Washington D.C. So when it comes down to it, their policies ultimately become our policies.

It is also important to note that Microsoft was a particularly eager participant in NSA spying from the very beginning. For example, according to the following PRISM slide provided by Edward Snowden, we see that Gates’ company was the first to become involved. In fact, they were participating a full six months before Yahoo!, while Apple didn’t join until a year after Steve Jobs died. 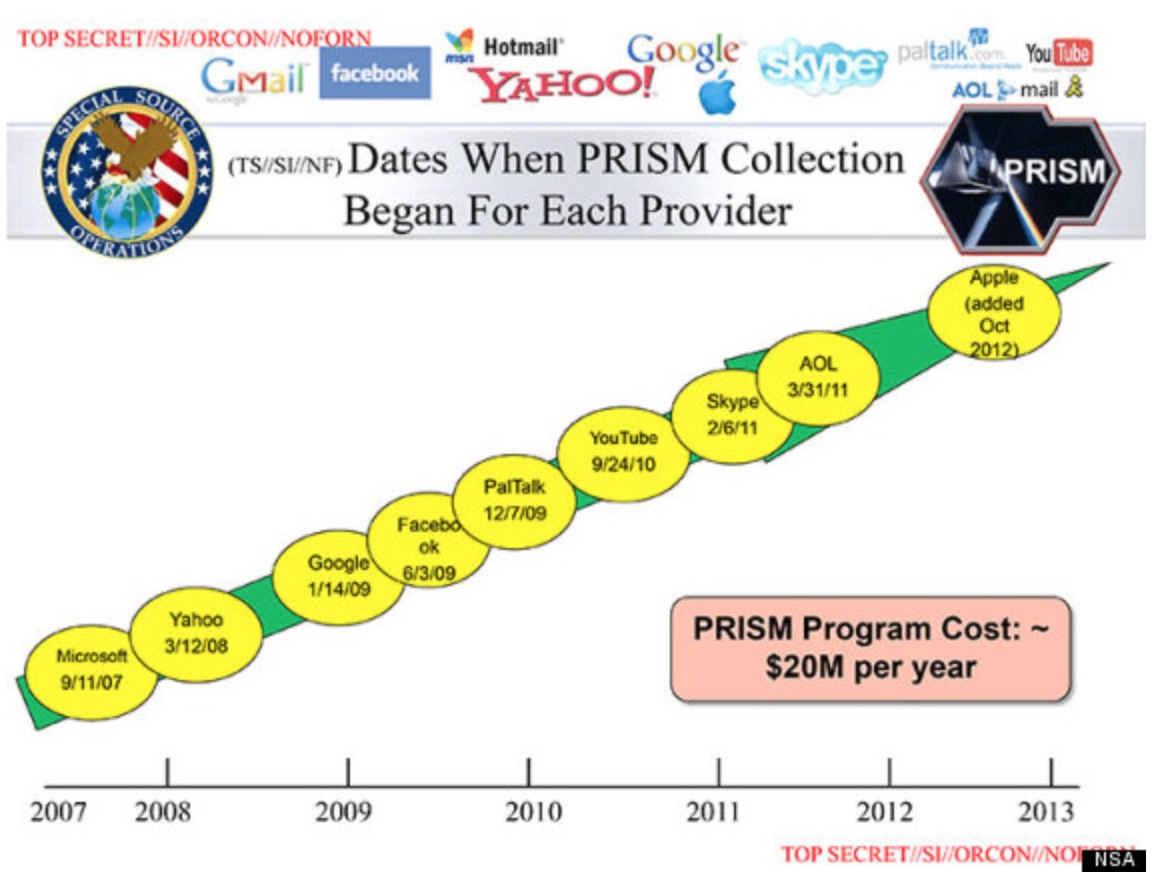 What a tangled web we have weaved. Now from Rolling Stone:

Question: When people think about the cloud, it’s not only the accessibility of information and their documents that comes to mind, but also their privacy – or lack of it.

Gates: Should there be cameras everywhere in outdoor streets? My personal view is having cameras in inner cities is a very good thing. In the case of London, petty crime has gone down. They catch terrorists because of it. And if something really bad happens, most of the time you can figure out who did it. There’s a general view there that it’s not used to invade privacy in some way. Yet in an American city, in order to take advantage of that in the same way, you have to trust what this information is going to be used for.

Do they really catch terrorists because of it in London? Because in the U.S., the NSA chief already admitted that the entire spy program has stopped essentially zero terrorist attacks. It certainly didn’t stop the Boston bombings. So what are we giving up our privacy for exactly?

Question: Thanks to Edward Snowden, who has leaked tens of thousands of NSA documents, we are. Do you consider him a hero or a traitor?

Gates: I think he broke the law, so I certainly wouldn’t characterize him as a hero. If he wanted to raise the issues and stay in the country and engage in civil disobedience or something of that kind, or if he had been careful in terms of what he had released, then it would fit more of the model of “OK, I’m really trying to improve things.” You won’t find much admiration from me.

Sorry Billy boy, but we have had many whistleblowers in the past who went through the system and they ended up in jail or their lives were ruined. For example, the only person imprisoned for torture in the USA is the guy who exposed the torture program, John Kiriakou.

Question: Even so, do you think it’s better now that we know what we know about government surveillance?

Gates: The government has such ability to do these things. There has to be a debate. But the specific techniques they use become unavailable if they’re discussed in detail. So the debate needs to be about the general notion of under what circumstances should they be allowed to do things.

First of all, without the Snowden revelations, there would be no “debate.” As it stands, the intelligence complex and Obama don’t seem to have much interest in changing a single thing anyway.

Before Snowden proved us right, those who accurately claimed the NSA was doing all of these things were labeled paranoid conspiracy theorists. Moreover, how can anyone seriously defend these “techniques” in light of the recent revelations that show activities so egregious that security experts think they threaten the infrastructure of the entire internet?

Gates goes on to ponder…

Should surveillance be usable for petty crimes like jaywalking or minor drug possession? Or is there a higher threshold for certain information?Those aren’t easy questions.

How are those not easy questions? They are exceedingly easy questions for a civilized society. The answer is no. Unless you want to toss even more citizens in jail for non-violent offenses, because having 25% of the world’s prison population and only 5% of its population is not inhumane enough.

The U.S. government in general is one of the better governments in the world. It’s the best in many, many respects. Lack of corruption, for instance, and a reasonable justice system.

Seriously, what country is Gates living in? I suppose when you are the richest man in the world it’s pretty easy to live in a bubble. He is so obsessed with the problems of the outside world and the fact that they are more corrupt than we are, that he is completely blind to the very dangerous trends happening in America.

The entire interview can be read here.