– *Just In* Scientists Raise Alarm: “Radioactive metal from Fukushima” detected in Pacific Northwest — Concern for impact on humans, west coast ecosystems — Continuing contamination crossing ocean, not going away soon — “A surprise… This is an international issue… Gov’t should be doing something” (ENENews, March 12, 2014): 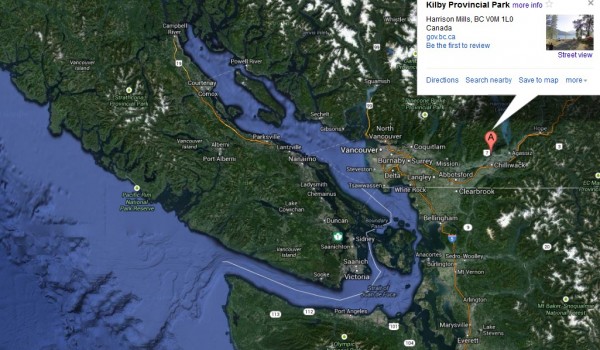 Vancouver Sun, Mar. 12, 2014 at 9:31a ET: Nuclear radiation found in B.C. may pose health concerns; Discovery of Fukushima radioactivity raises concerns for local marine life, and the effect it may have on humans — A radioactive metal from the Fukushima nuclear plant disaster in Japan has been discovered in the Fraser Valley, causing researchers to raise the alarm about the long-term impact of radiation on B.C.’s west coast. Examination of a soil sample from Kilby Provincial Park, near Agassiz [approx. 100 km east of Vancouver coast], has for the first time in this province found Cesium 134, further evidence of Fukushima radioactivity being transported to Canada by air and water. […] Its presence in the environment is an indication of continuing contamination from Fukushima. […] [The sample was taken] near the mouth of the Harrison River, on Nov. 16, 2013. Samples of chinook, sockeye and chum spawning salmon nearby are also being analyzed for evidence of radiation. […] Cesium 137 […] may negatively affect the immune system or endocrine system, [Professor Juan Jose] Alava said. […] The results raise concerns for aboriginal people who maintain a diet heavy in fish. […] Alava noted the plant continues to leak radiation, meaning that the problem is not going away soon.

Professor Juan Jose Alava, school of resource and environmental management at Simon Fraser University: “That was a surprise. It means there are still emissions … and trans-Pacific air pollution. It’s a concern to us. This is an international issue. […] The Canadian government is the one that should be doing something, should be taking action to keep monitoring to see how these contaminants are behaving, what are the levels, and what is next. […] The impact on the animal needs to be studied. This is part of a cumulative impact on the marine environment. We might expect similar results [to the killer whales] because the diet of First Nation communities is based on seafood […] Humans at the top of the food web can perhaps see increasing levels in the future. There’s going to be a long-term exposure to organisms building up in the marine environment.”

See also: Experts: Areas along West Coast “may be… affected in significant way” by Fukushima plume in coming months — Impact can’t be accurately predicted, currents to produce complex results — Radioactive materials can be ‘fairly concentrated’ even after crossing ocean