– Chairman Of Joint Chiefs: US Ready For “Military Response” In Ukraine (ZeroHedge, March 12, 2014):

With diplomacy having failed miserably to resolve the Russian annexation of Crimea, and soon East Ukraine (and with John Kerry in charge of it, was there ever any doubt), the US is moving to the heavy artillery. First, moments ago, the US DOE announced in a shocking announcement that it would proceed with the first draw down and sale of crude from the US strategic petroleum reserve, the first since June 2011, in what it said was a “test sale to check the operational capabilities of system infrastructure”, but is really just a shot across the bow at Putin for whom high commodity prices are orders of magnitude more important than how the Russian stock market performs. And now, as Bloomberg just reported, the US has escalated even further, citing the Chairman of the Joint Chiefs of Staff, General Martin Dempsey, who “has claimed that in the case of an escalation of unrest in Crimea, the U.S. Army is ready to back up Ukraine and its allies in Europe with military actions.” 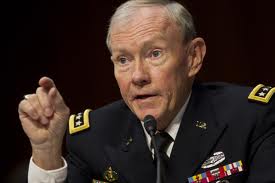 So much for those peaceful hour long phone calls between Obama and Putin.

According to the Web site of the Atlantic Council, Dempsey said that “he’s been talking to his military counterparts in Russia, but he’s also sending a clear message to Ukraine and members of NATO that the U.S. military will respond militarily if necessary.”

“We’re trying to tell [Russia] not to escalate this thing further into Eastern Ukraine, and allow the conditions to be set for some kind of resolution in Crimea. We do have treaty obligations with our NATO allies. And I have assured them that if that treaty obligation is triggered [in Europe], we would respond,” Dempsey said.

According to the General, the incursion of Russian troops into the Crimea creates risks for all the countries of Europe and NATO allies.

“If Russia is allowed to do this, which is to say move into a sovereign country under the guise of protecting ethnic Russians in Ukraine, it exposes Eastern Europe to some significant risk, because there are ethnic enclaves all over Eastern Europe and the Balkans,” Dempsey said.

And with that, the USDJPY ramp takes the pair to overnight highs, and futures are set to go green. BTFWWIIID!

More seriously, the real question is how Putin will react to this quantum escalation in verbal hostilities: wild guess here, but somehow we doubt he will pick up and leave.

5 thoughts on “Chairman Of The Joint Chiefs Of Staff: US Ready For ‘Military Response’ In Ukraine”