Futures are soaring and are just shy of their record high first following news that the Russian military drill has ended, even if Russian troops stationed in the Crimea remain, but more importantly driven by a just completed press conference by Vladimir Putin in his residence outside of Moscow, in which the Russian leader appears to have softened his stance on Crimean aggression, saying he does not consider adding Crimea to its territory. What the market is focusing on is the repeat of Putin’s stance that he will not be sending troops to the Crimea yet (even though they are there already), and that he suddenly appears concerned about the impact on markets and the fallout from sanctions. 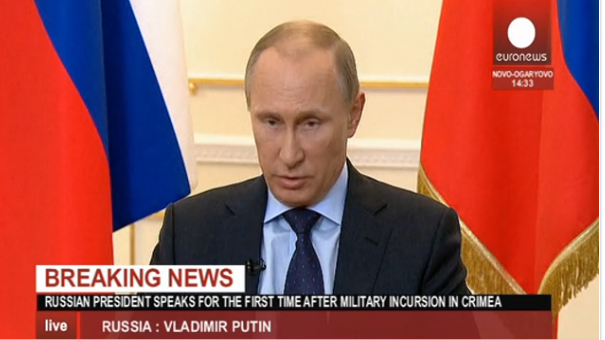 The key highlights from the speech from Blooomberg.

On the oh so sensitive topic of Russian gas:

So is this Putin offering an olive branch to the West and de-escalating Crimea, or just more smoke and mirrors for the media to consume even as Putin fully entrenches in the territory? Expect to find out shortly.

President Vladimir Putin said on Tuesday that Russia saw no need to use military force in the Crimea region of Ukraine for now, in remarks apparently intended to ease East-West tension over fears of war in the former Soviet republic.

The use of force by Russia in Ukraine would be a choice of last resort, Putin said, and sanctions being considered against Moscow by the West would be counter-productive.

Putin told a news conference at his state residence outside Moscow there had been an “unconstitutional coup” in Ukraine and ousted leader Viktor Yanukovich, an ally of Russia, was still the legitimate leader of the country despite giving up all power.

Earlier on Tuesday, Putin ordered troops involved in a military exercise in western Russia, close to the border with Ukraine, back to their bases.

Russian financial markets rebounded after sharp falls on Monday, and the euro and dollar rose in Japan, though Moscow’s forces remained in control of Ukraine’s Crimea region, seized bloodlessly after Yanukovich was ousted last month.

Russia paid a heavy financial price on Monday for its military intervention in Ukraine, with stocks, bonds and the rouble plunging as Putin’s forces tightened their grip in Crimea, whose population is mainly ethnic Russian.

The Moscow stock market fell more than 10 percent on Monday, wiping nearly $60 billion off the value of Russian firms, but Russian stock indexes rose more than 4 percent early on Tuesday before slipping back again slightly, though still up on the day.

Putin said the turmoil in Russian markets was a “tactical, temporary” decision by investors.

U.S. Secretary of State John Kerry will propose ways for a negotiation between Russia and Ukraine to be overseen by a multilateral organisation when he visits Kiev on Tuesday.

NATO allies will hold emergency talks on the crisis on Tuesday, for the second time in three days.

In further pressure on Kiev, Russia’s top gas producer Gazprom said it would remove a discount on gas prices for Ukraine from April, Interfax news agency cited the company’s chief as saying on Tuesday.

However, Gazprom chief Alexei Miller also said the company could offer Ukraine a loan of $2-3 billion to pay off the country’s debt of more than $1.5 billion after Ukraine said it was unable to pay in full for gas deliveries in February, Interfax news agency said.

Putin said at the weekend that he had the right to invade Ukraine to protect Russian interests and citizens after Yanukovich’s downfall following months of popular unrest. Russia’s Black Sea Fleet has a base in Crimea.

But the military exercises in central and western Russia, which began last week and raised fears that Russia might send forces to Russian-speaking regions of east Ukraine, were completed on schedule.

“The supreme commander of the armed forces of the Russian Federation, Vladimir Putin, gave the order for the troops and units, taking part in the military exercises, to return to their bases,” Kremlin spokesman Dmitry Peskov was quoted as saying by Russian news agencies.

Although the end of the exercises had been planned, the announcement sent a more conciliatory message than much of the rhetoric from Russian officials, who say Moscow must defend national interests and those of compatriots in Ukraine.

Putin is dismayed that the new leadership in Ukraine, the cradle of Russian civilisation, has plotted a course towards the European Union and away from what had been Moscow’s sphere of influence during generations of Soviet Communist rule.

Moscow’s U.N. envoy told a stormy meeting of the Security Council that Yanukovich had sent a letter to Putin requesting he use Russia’s military to restore law and order in Ukraine.

Ukraine said observers from the Organization for Security and Cooperation in Europe, a pan-European security body, would travel at its invitation to Crimea in an attempt to defuse the military standoff there.