(San Francisco) – Feb 28, 2014 – Carlsbad, New Mexico is the site of the nation’s only nuclear weapons program garbage dump. Plutonium is used in making The Bomb, it melts at 640 Deg C or 1,184 Deg F, and is made in reactors. It is not mined anywhere on Earth. Reactors exist to make Bombs.

The Carlsbad Bomb making garbage dump is on fire. The burning radioactive metal does not go away, it turns to dense black radioactive smoke. The black smoke is very obvious in the daytime and it streamed from several ventilator shafts during a fire at the dump two weeks ago.

The shafts were then closed and the visible smoke kept underground. Plutonium does not need oxygen to burn and escaped anyway. The HEPA filters are not good enough to contain the very small Plutonium particles; that’s because nothing is. The fire very well could still be burning Plutonium and Uranium in the salt mine.

The special Bomb making isotopes catch fire easily and burn at unearthly high temperatures – nothing can contain a fire in the underground garbage dump.  Since Uranium and Plutonium burn at higher temperatures than rock salt, there is a remote possibility the underground dump itself is on fire.

This is all about the contaminated garbage left over from making nuclear and thermonuclear bombs. That is the source of the poisonous garbage buried 2200 ft, or 670.56 meters, beneath the southeastern New Mexico desert. 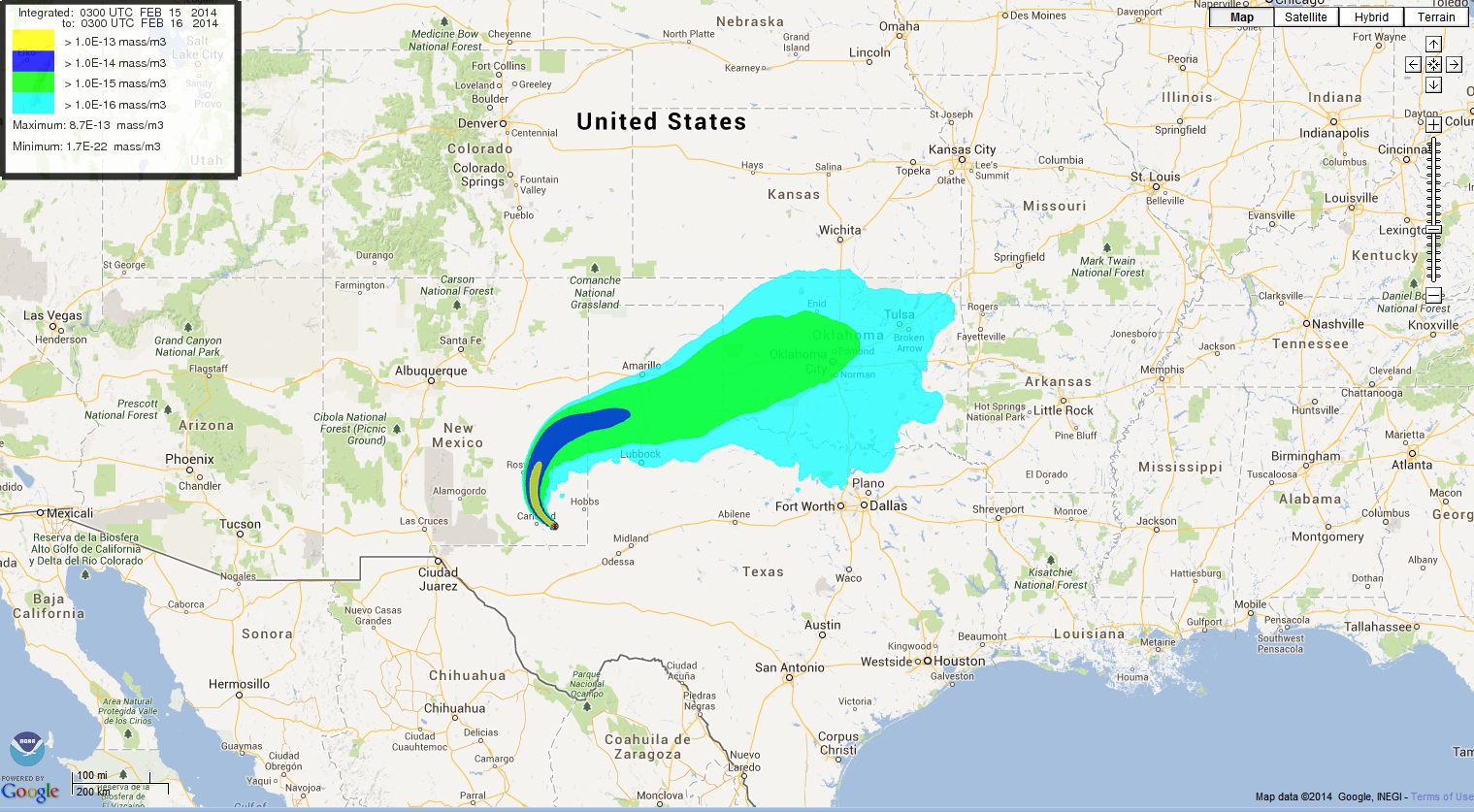 The nation manufactures and maintains more than 60,000 nuclear and thermonuclear weapons. Bomb production has not necessarily stopped. All the contaminated garbage, trucks, tools, junk, wipes and clothes, etc from 70 years plus of nuclear weapons production is stuffed down a hole in New Mexico.

As of Feb 28, 2014 the mine operator, a private corporation, had announced that 13 employees were radiologically contaminated inside their bodies. The poison will probably kill them all. Dog studies done with living animals show us how they will die. From the few reports that surfaced in the past two weeks enough plutonium was released to kill 35,500 people.

The Department of Energy (DOE) has legal title to all the nation’s thermonuclear weapons and is one point of possible responsibility. The DOE announced six areas of potential contamination spreading outward from the garbage dump.

All adults in the First Contamination Zone, up to 100 miles or 160km, from the Carlsbad dump are eligible for free whole body scans. This is of little value in Plutonium Contamination since it is a different form of radioactive energy. The expensive scans take about an hour and, of course, will find nothing. That’s a  typical Scam of the DOE.

It’s amazing. A normal human couldn’t make this up if they tried. That’s life in the DOE and the nation’s nuclear weapons program. It is just bizarre.

Copyright by Bob Nichols Mar 2, 2014. All rights reserved. Distribute with credit and all Notes and Sources. Reach Bob Nichols at duweapons@gmail.com

1. Dog studies. Infinitely bad stuff to be sure; but we do have numbers on the Infinite. The Lethality was well established last century in the 1940s and 1950s. Plutonium Lethality = 10 Million per Gram. Of course, Plutonium burial is why WIPP is in business. The Wipp is no more than a very expensive, problem plagued nuclear garbage dump that supports the construction, transportation, maintenance and use of thermonuclear weapons. For André (Tamplin, Cochran, Gofman) 1 gram Pu239 = 10 million lethal doses.)

2. “DOE said the radiation that got into the air Valentine’s Day was likely at very low levels, no more risky than a chest X-ray”

Unlike external exposure to radiation, these 13 staff will suffer the same fate as the beagle dogs that were made to inhale plutonium dioxide. To be specific:

“Deaths from radiation pneumonitis occurred from 1.5 to 5.4 years after exposure. Tumors of the lung, skeleton and liver occurred beginning at about 3 years after exposure. Bone tumors found in 93 dogs were the most common cause of death. Lung tumors found in 46 dogs were the second most common cause of death. Liver tumors, which were found in 20 dogs but were the cause of death in only two dogs, occurred later than the tumors in bone and lung. Tumors in these three organs often occurred in the same animal and were competing causes of death. These findings in dogs suggest that similar dose-related biological effects could be expected in humans accidentally exposed to 238PuO2.

4. TV: “Disturbing new development in WIPP radiation leak, surprising words today” — “What went wrong and why, those are some of the questions swirling around” — County official calls it ‘a disaster’ (VIDEOS) February 27, 2014

6. CNN: Alarm due to radiation spike brings ’1st-of-its-kind’ response at US nuclear site — Inspections cancelled, no one able to enter facility due to ‘high radiation’ levels — Reuters: Plans got called off over ‘safety thing’ — Gov’t: ‘Pretty sure’ we know where leak is — Local TV calls it ‘emergency’ (VIDEO) February 17, 2014

7. LA Times: Expert says ‘radiological process’ may have forced material out of container at US nuclear site, “Could be a mess”; Officials saying little about extent of problem — Levels remain too high to let in non-essential personnel — Air monitors not allowed to collect filters February 18, 2014

12. Microbes and Malignancies, Infection as a cause of human cancers, edited by Julie Parsonnet. Amazon, http://www.amazon.com/Microbes-Malignancy-Infection-Cause-Cancers/dp/0195104013