Seattle Times, Feb. 28, 2014 (emphasis added): ‘Serious problem’: 65-foot crack found in Columbia River dam — A massive crack in a major Columbia River dam poses enough of a risk of dam failure that Grant County authorities have activated an emergency-response plan. […] “At this point we already know there’s a serious problem,” said Thomas Stredwick, spokesman for the Grant County Public Utility District (PUD). “We want to make sure the spillway is stable enough that inspectors are safe when inspecting it. […] This is a situation that’s really changing as more information becomes available” […] 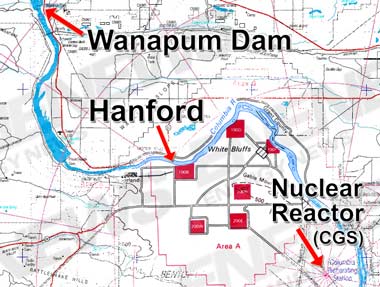 Seattle Times, Feb. 28, 2014: There’s no immediate threat to public safety from the crack in the Wanapum Dam […] Stredwick said […] officials analyzed the divers’ data and decided Friday that the failure risk was sufficiently high that they should notify other government agencies […]

Columbia Basin Herald, Mar. 1, 2014: [T]his large of a crack has never been found on a Grant PUD dam. […] engineers noticed something unusual on the water level […] the crack, which spans the entire length of the dam, had formed about 70 feet under water.

Oregon Public Radio: Worst-case scenario is if the spillway was to topple. But Stredwick thinks other sections of the dam would hold on and downstream communities should be safe.

NBC News, Mar. 1, 2014: [NOAA’s] National Weather Service issued a flash flood watch for Grant County through the weekend as the water is drawn down because “the potential exists for a rapid increase in flows from Wanapum Dam.”

Eugene Weekly, Nov. 27, 2013: Dam failure was also examined, [David Swank, assistant VP at Columbia Generating Station] says, using flood maps provided by the Army Corps of Engineers […] “Flood level would not get to the plant,” Swank says, providing nothing has changed in the 30 years since the mapping was done. […] “It’s always tough to say with certainly that a facility is 100 percent prepared for an unknown disaster,” says Geoff Tyree of the Department of Energy. He says the DOE has looked at the possibility of the worst-case scenario where the Grand Coulee Dam partially fails on the Columbia River. He says that flooding could result in the release of radioactive material from portions of Hanford into the water, but he says that same water would dilute the radiation to a very low level off site […]

2 thoughts on “US: Emergency Plan Activated After ‘MASSIVE’ Crack Found In Dam Near Hanford Nuclear Site”