Overnight, there had been numerous rumors that the newly appointed chief of the Ukraine navy, who was just made head of the navy on Saturday, had defected to the Crimean people explicitly, and to pro-Russian forced in the region implicitly. The sourcing of most were various Russian outlets so we discounted these until we got confirmation from a “western” source. The BBC did just that moments ago.

The newly appointed head of Ukraine’s navy has sworn allegiance to the Crimea region, in the presence of its unrecognised pro-Russian leader.

Rear Admiral Denis Berezovsky was only made head of the navy on Saturday, as the government in Kiev reacted to the threat of Russian invasion.

Russia’s troops have been consolidating their hold on Crimea, which is home to its Black Sea Fleet.

The moment of defection allegedly caught on digital media:

The move is not entirely unexpected: while the US may not have many issues with facing the Russian navy head on as it did last summer in the Mediterranean over Syria, others are not quite as excited with being on the receiving end of the Russian military juggernaut.

So if this has been confirmed, the rest of the news reported earlier by RIA is also true. To wit:

Ukraine’s autonomous region of Crimea confirmed Sunday that the majority of Ukrainian military units stationed on the Crimean peninsula have expressed their support of legitimately elected Pro-Russian authorities.

Earlier reports by Russian media about peaceful takeover of the military units by forces loyal to the Crimean government were denied by the Ukrainian defense ministry.

However, Crimean authorities said that most of the Ukrainian units sided on Sunday with pro-Russian forces “without a single shot fired,” and warned the commanders of a few units that remain loyal to Kiev that they would face criminal action if refused to surrender.

“I would like to warn commanders who force their subordinates to commit illegal actions that they will be punished according to existing laws,” Crimea’s Prime Minister Sergei Aksenov said in a statement.

The Crimean government said earlier that some 10 warships from the Ukrainian navy left their naval base in Sevastopol apparently on orders from Kiev.

Crimea is now at the center of the ongoing crisis in the country as pro-Russia groups move to distance themselves from a reformed national parliament that ousted President Viktor Yanukovych a week ago.

The map below is said to summarize all the Ukraine cities where the Russian flag has already been hoisted. 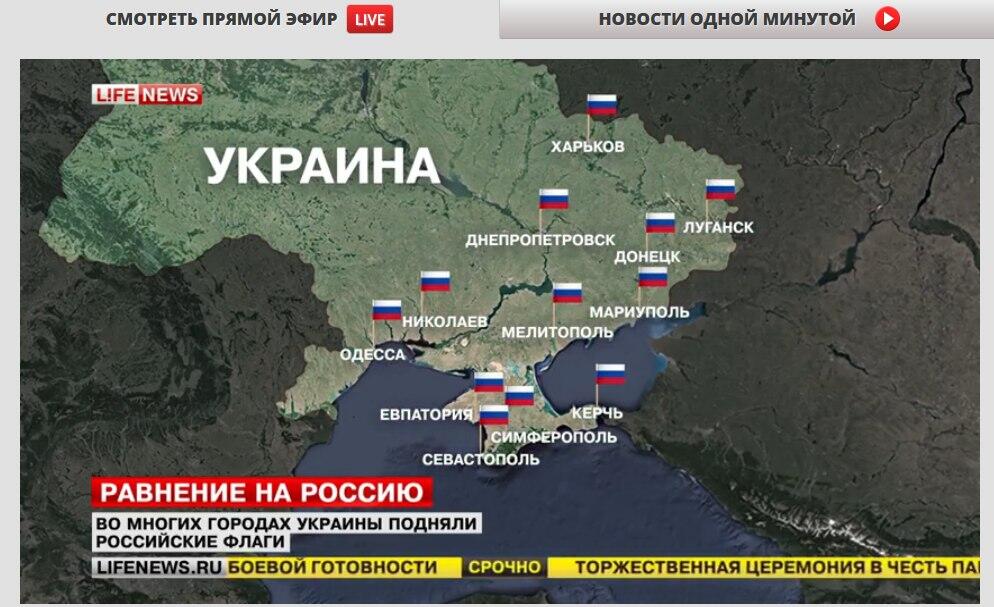 If anything, these bloodless victories will only embolden Russia to press on: hardly the resolution the west would like. Perhaps that explains why early unofficial quotes of the Russian Ruble see the currency dropping as much as 10%.