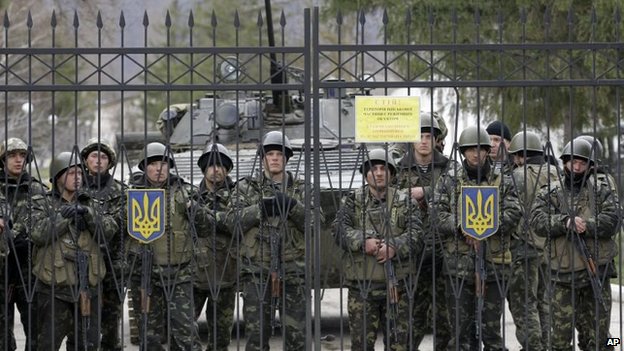 With less than 6 hours left until FX trading opens, no resolution to the Ukraine crisis is in sight. Instead the situation has devolved even more and overnight Ukraine has ordered a full military mobilization in response to Russia’s build-up of its forces in Crimea. Prime Minster Arseniy Yatsenyuk said the country was “on the brink of disaster.” Several other measures were announced on Sunday by national security officials:

Ukrainian Prime Minister Arseniy Yatsenyuk said Sunday that his country was “on the brink of disaster” and personally blamed Russian President Vladimir Putin for bringing the two nations to the verge of war. Speaking to reporters at the Ukrainian parliament, Mr. Yatsenyuk called on the international community to rein in Mr. Putin and pressure him to remove troops from the Crimean peninsula, where a majority of residents are ethnic Russians but have Ukrainian passports.

“If President Putin wants to be the president who starts the war between two friendly and neighboring countries, he has [almost] reached this target,” Mr. Yatsenyuk said. “We are on the brink of disaster. There was no reason for the Russian Federation to invade Ukraine.”

Western diplomats doubt that the Ukrainian armed forces would be able to match up to the Russian forces already in control of the critical infrastructure and border points in the Crimea.

Ukrainian leaders say that Russia has already sent an additional 6,000 troops to Crimea since tensions arose in the peninsula last week. The two countries have a military agreement that allows Moscow to base forces in the region, but Ukrainian officials accuse Moscow of violating that treaty by not informing Kiev of additional troops, and by moving forces without prior notice. Moscow says that it is in compliance of the accord.

“Across the entire territory of Crimea, Russian emissaries and military officers have invited the remaining Ukrainian interior ministry troops to take Russian citizenship and immediately receive Russian passports,” Arsen Avakov wrote on his Facebook page. “This appeal has been aimed at upper and middle officer corps troops.”

Mr. Avakov denied that Ukrainian forces had threatened the Russian-speaking population on the largely pro-Russian peninsula, and blamed Russian forces for the sharp militarization of the region.

“In Crimea, there are no forces from the interior ministry or the regular army threatening citizens of the Russian Federation or the Russian-speaking population,” he said. “And also no self-defense units from Maidan have arrived from Kiev. All destabilization in the Crimea has come from and been masterminded in Russia.”

The BBC adds that it has seen what appear to be Russian troops digging trenches on the Crimean border.  Furthermore, a standoff between Ukrainian troops who have fortified a base in the crimean city of Privolnoye, borth place of the late USSR president Mikhail Gorbachev, and Russians who have surrounded them, may be the match that set it all off. Fox reports that hundreds of unidentified gunmen surrounded a Ukraine’s infantry base in Privolnoye in its Crimea region Sunday. The convoy included at least 13 troop vehicles each containing 30 soldiers and four armored vehicles with mounted machine guns. The vehicles — which have Russian license plates — have surrounded the base and are blocking Ukrainian soldiers from entering or leaving it.

This is the current state of the standoff:

Squad of Russian reinforcements arrive at Perevalne base where #Ukraine troops surrounded. No sign of them moving in. pic.twitter.com/vFypJnw8dy

In response, acting Prime Minister Arseniy Yatsenyuk said the move by Russian forces to surround military bases in Crimea was “a declaration of war.”

His comments were echoed by acting president Oleksandr Turchynov, who said Ukraine had closed its airspace to non-civilian aircraft. Among the other statements by Yatsenyuk, as reported by the WSJ:

An interactive map of the key Ukraine battlefields is shown below: 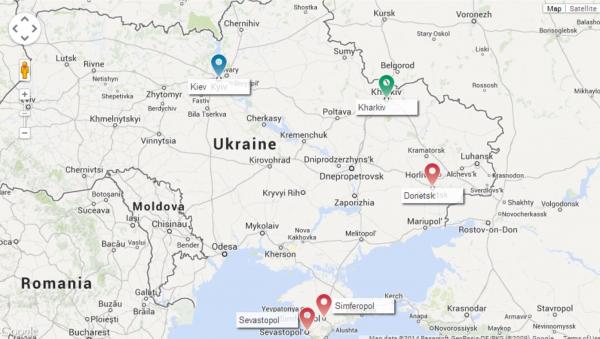 Finallly, there was the traditional escalation in Western diplomacy with both France and Britain announcing they are putting on hold their plans for participation in the G-8 conference to be held in Sochi.

It gets better. From the WSJ:

France is not considering any military action in response to Russia’s decision to deploy troops inside Ukraine, French Foreign Minister Laurent Fabius said Sunday, as Western countries instead sought to renew diplomatic pressure on Moscow.

In an interview with French TV, Mr. Fabius said Poland had requested a meeting of the North Atlantic Treaty Organization, or NATO, military alliance “because it feels threatened by what’s going on in Ukraine.”

Asked if France would intervene militarily in Ukraine, Mr. Fabius responded: “Today, this is not the hypothesis. I’m telling you we want a de-escalation.”

“France’s position is to call for the suspension of preparation ahead of the G-8 meeting in Sochi as long as the Russian partners have not returned to principles in agreement with the G-8 and G-7,” Mr. Fabius said.

Apparently unlike Mali and the Central African Republic, Russian can fight back.

Well if nothing else stopped Putin, this surely will.