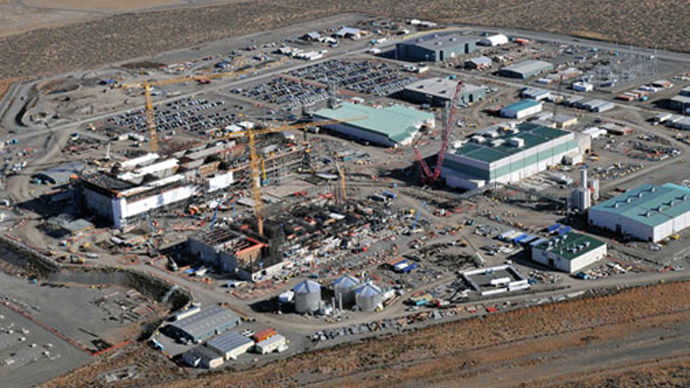 “Significant construction flaws” have been found in at least 6 of the 28 double shelled radioactive waste storage tanks at the Hanford nuclear waste complex in Washington State, which may lead to additional leaks, documents obtained by the AP say.

After one of the 28 huge underground double shelled tanks was found to be leaking in 2012, subsequent surveys performed for the US Department of Energy by one of its Hanford contractors found that at least six of the other tanks shared the same defects, according to the documents. A further 13 tanks may also be compromised, the inspectors found.

“It is time for the Department (of Energy) to stop hiding the ball and pretending that the situation at Hanford is being effectively managed,” Senator Ron Wyden, D-Ore, who until recently was chairman of the Senate Energy and Natural Resources Committee, wrote Friday in a letter to Energy Secretary Ernest Moniz.

According to him, the six double-walled tanks which have construction flaws similar to those at the leaking tank contain about 5 million gallons of radioactive wastes.

Wyden also criticized the Department of Energy for not mentioning the flaw in the double walled tanks in a September framework plan for a cleanup in Hanford.

“The citizens living along the banks of the Columbia River deserve to know the full story of what is happening with the Hanford tanks,” Wyden wrote. He also asked the Department of Energy to give him a response in 45 days.

Hanford is located on the Columbia River in Washington State near the border with Oregon and contains 53 million gallons of high-level nuclear waste from the production of plutonium for the US nuclear weapons program. It was built during World War Two as part of the Manhattan Project to build the nuclear bomb. There are some 177 underground storage tanks on the site, many of which date back to World War Two. These are single skinned and many have already leaked. The 28 double walled tanks were built as replacement between the 1960’s and 1980’s.

After the AP published its report, Senator Doc Hastings, R-Wash, released a statement saying there is “no new threat to our communities or our environment” and that “new storage tanks will never be a panacea” for the Hanford nuclear waste problem.

Energy Department officials in Richland near Hanford insisted that they are continuing to make thorough inspections of the tanks and that the frequency of inspections has been increased from five-seven years to every three years.

Tom Fletcher, the Department of Energy’s assistant manager to the tank farms, said his teams are now in the process of looking at the final eight double walled tanks that haven’t been inspected since the 2012 leak was discovered.

“If there are changes or improvements we need to make in the program, based on what we learn, to make sure we capture the risks that exist on the tank farms, we will make them,” Fletcher said.

Tom Carpenter from a citizen’s watchdog group called Hanford Challenge said he wasn’t surprised at the news of the leaking tanks.

“These tanks have an engineering design life, and we’re reaching the end. Its bad planning that they don’t have new tanks up and running,” he said.

“The price for cleaning up the environment once this stuff gets out is incalculable,” he added.