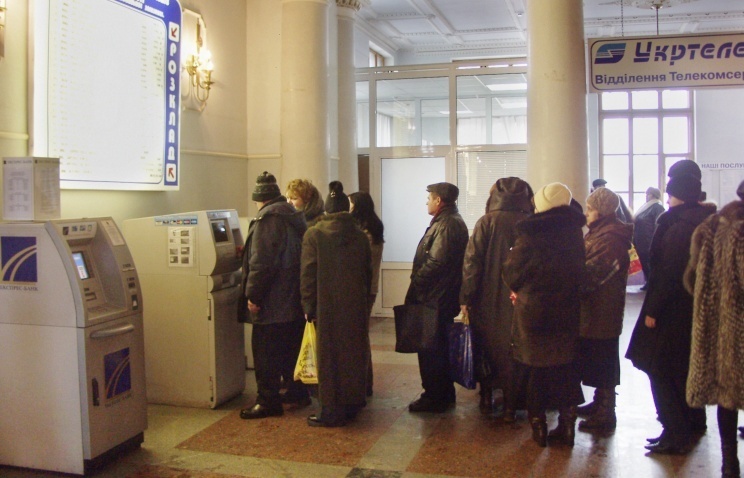 Yesterday we reported that as part of the Ukrainian central bank’s plan to bailout the nation’s largely insolvent private banks, it would provide any needed funding but only “if they will remain under open control of the National Bank of Ukraine.” And since the new CB head Stepan Kubiv’s allegiance to Europe were already well-known, this was merely a quick and efficient way of providing Europe with all the banking details including asset holdings of the local population. Today, the annexation of the country’s banking system by a “benevolent” Europe is complete.

Itar-Tass reports that Ukraine’s national bank has imposed temporary limits to withdraw money from foreign currency deposits to sums equivalent to no more than 15,000 hryvnias (about $1,500) a day, National Bank Chief Stepan Kubiv told a press conference. Or, as the citizens of Cyprus call it – capital controls.

Why is Ukraine doing this? Because when your currency is crashing at a record pace to unseen lows, what is the best way to limit FX transactions? Simple – just minimize the amount of foreign currency that can be in circulation.

Which is also why the the central bank’s capital controls do not touch local currency: there is more than enough of that in circulation since after all Ukraine has its own currency and can print it in infinite amounts: “For hryvnia deposits you may take as much as a million or two. Banks have liquidity,” Kubiv said.

Then there was the token propaganda:

The chief banker also noted that the situation on Ukraine’s currency market was under control. “The exchange rate may move in one direction and the opposite. There are just emotions and misinformation on the financial market,” he noted.

He assured the national bank would toughly stop violators of the currency law. For example, inspectors were sent to eight banks that had engaged in speculation, he said.

To summarize: first banks abdicate their control to a pro-European central bank, and now the citizens face their first (of many) capital controls which incidentally will simply aggravate the fund outflow situation even more, leading to an even faster drop in foreign reserves.

Finally comes the inflation. Wait until the people start rioting – think Egypt – when the economy collapses and a loaf of bread costs its wheelbarrow equight equivalent in Hryvnias. Just how fast will the countercoup in Ukraine take place then? Recall, in Egypt it was just over a year and a half…