The bizarre events in the Crimea continued overnight, after unidentified masked men but dressed like those who took over the parliament in Simferopol yesterday, took over two airports by blockading one near the Russian naval base in Sevastopol and another in the capital of Simferopol. This prompted the Ukraine’s interior minister Arsen Avakov, to accuse Moscow’s military of blockading the airports, and in a Facebook post, he called the seizure of the Belbek international airport in the Black Sea port of Sevastopol a “military invasion and occupation.” He added: “It is a breach of all international agreements and norms.” As NBC reports, the Interfax news agency quoted Russian military sources as saying the incident at Belbek airport was intended to stop “fighters” flying in. However, Interfax later quoted a Russian official as saying that no units had approached the airport or blockaded it. In a nutshell, Russia continues to push with escalation ever further, and is testing just how far it can and will go without Ukraine responding. 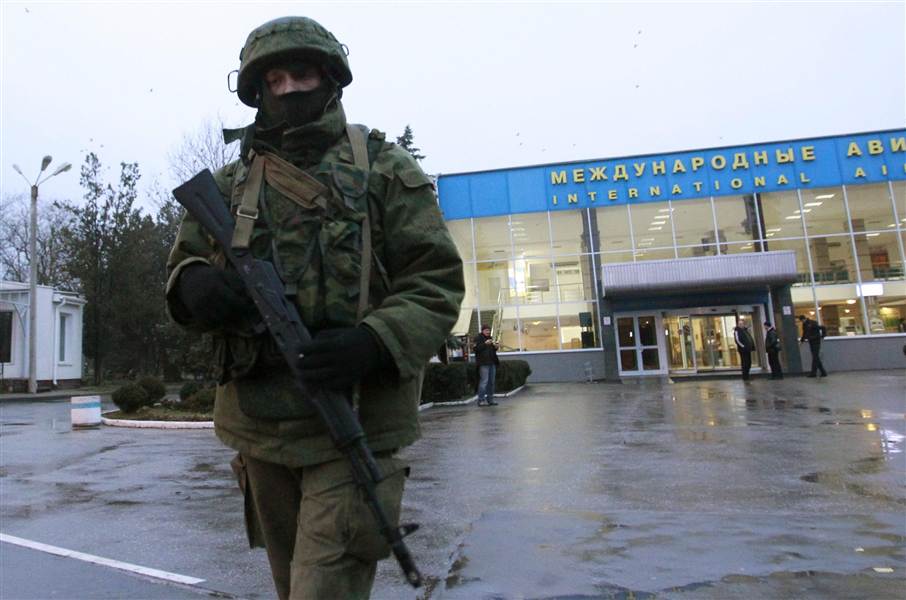 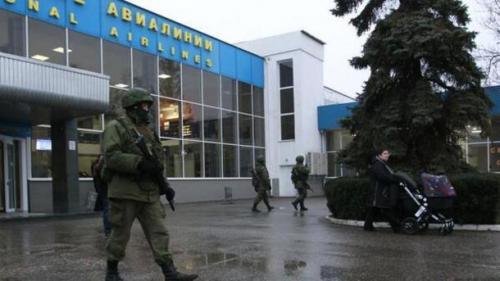 2-3 dozen militiamen at Simferopol #Crimea airport quickly piled into a truck – with no plates – and are leaving. pic.twitter.com/wgcIjvE8jV

Two Crimean airports were taken over by Russian military troops, Interior Minister Arsen Avakov said on Facebook this morning. He said the situation in the autonomous republic has now escalated to “a military intervention” and called on the National Security Council to take urgent steps towards its regulation.

“My assessment of what’s going on is that it’s a military intervention and occupation in violation of all international agreements and norms,” he said in his statement. “This is a direct provocation of bloodshed on the territory of a sovereign state.”

Avakov said that Sevastopol’s military airport Bilbek at night was blocked off by the military units of the Russian navy, which is based in Sevastopol. He said the airport is surrounded by camouflaged military troops with no identification and carrying guns. He said they do not hide their Russian affiliation.

Inside the airport there is a group of Ukrainian soldiers and border guards, and Ukrainian police troops have surrounded the outer perimeter of the airport. “There have been no armed clashes so far,” he said.

The navy base is Sevastopol is key for the Russian army. Under agreements signed between two countries in 2010, the Russian military can continue to use Sevastopol until 2042, with an option of extending the lease to 2047.

Some 70 kilometers away from the coast, in Crimean capital Simferopol, another airport was taken over by a group of about 100 plain-clothed men, who went inside the airport and onto the runway.

“The interior troops and police pushed these people first into the airport building, and then out of the territory. No weapons were used,” Avakov said.

He said that after the armed men left, a new group of camouflaged men arrived around 1:30 in the morning. They carried automatic weapons and had no markings. Avakov said they entered the building and stayed int he restaurant.

“They are not hiding their affiliation with the army of the Russian Federation,” Avakov said. “Told by the Ukrainian Interior Ministry workers that they are military men and have no right to be there, they answer curtly that they have no instructions to negotiate with you.”

Avakov said that so far there have been no clashes, but tension is growing as Ukrainian police troops continue to arrive. “The law enforcement organs cannot oppose the army,” Avakov concluded.

In the meantine, Ukraine is starting to realize that it may have bitten more than it can chew, and as Interfax reported:

Yet none of this compares to today’s main event when a t 5pm local time, in the Rostov-on-Don Technical University, deposed Ukraine president Yanukovich who is currently in Russia, is expected to hold a press conference. Missing since the beginning of the week, the ousted ukrainian president had fled the country to Russia in the latest days, either by car through the Donetsk region, either escorted by military planes, according to different reports.

We doubt anything he says will difuse the situation.