The following remarks by John Kerry, borne out of his humiliation over the complete fiasco that was the US intervention in Syria last year and the even greater fiasco that was this year’s attempt to get all feuding parties on the table in Geneva, only to see that outcome obliterated as well, appear to be borne out of his disgust at the defunding of the US defense budget, which for Kerry, more than his gross incompetence, is the reason why the US now finds itself in a “new isolationism” leading him to conclude that the US is “beginning to act like a poor nation.” One wonders what tipped him off: the fact that the US debt just hit a record high $17,419,220,117,766.69 or that the biggest monetizers of US deficit spending are the Fed, China and just as insolvent Japan?

Speaking to reporters, Kerry inveighed against what he sees as a tendency within the United States to retreat from the world even as he defended the Obama administration’s diplomatic efforts from Syria to the Israeli-Palestinian conflict. In comments tied to the budget that U.S. President Barack Obama is expected to present on Tuesday, Kerry suggested that tighter spending, in part at the behest of congressional Republicans, may limit U.S. clout around the world.

“There’s a new isolationism,” Kerry said during a nearly one-hour discussion with a small group of reporters.

“We are beginning to behave like a poor nation,” he added, saying some Americans do not perceive the connection between U.S. engagement abroad and the U.S. economy, their own jobs and wider U.S. interests.

Perhaps some other Americans are tired of America acting as Globocop, and as the world’s hypocritical superpower dispensing “justice” when it fits its national interests, and ignoring all other conflicts, specifically when Mid-East oil, or the growing Russian sphere of influence is not concerned?

Kerry made the case as Obama prepares to release a budget that will adhere to spending levels agreed to in a two-year bipartisan budget deal struck late last year, entailing some spending cuts the administration would have preferred to avoid.

The U.S. State Department budget will decline slightly in the president’s budget submission, Kerry said, saying this was a direct result of the bipartisan budget deal that cut funding further than Obama wanted.

“This is not a budget we want. It’s not a budget that does what we need,” he said, saying the budget deal entailed cuts demanded by the Republican-led House of Representatives. “It was the best the president could get. It’s not what he wanted.”

But hold on: wasn’t it Kerry’s own party that has been urging the defunding of the US defense budget at the expense of overfunding welfare and benefits? The people are confused.

Next, Kerry deflects his own personal failings as SecState, having had to be pulled from his yacht last summer, just as the Syrian conflict was reaching its climax:

In speaking of what he called the “new isolationism,” Kerry cited the limited support in the U.S. Congress to back Obama’s plan to launch an air strike against Syria last year because of its suspected use of chemical weapons against civilians.

Obama, in a decision criticized by some U.S. allies in the Gulf and elsewhere, asked Congress to vote on a strike. With limited congressional backing, he ultimately abandoned a strike and pursued a deal to get Syria to give up its chemical weapons.

“Look at our budget. Look at our efforts to get the president’s military force decision on Syria backed up on (Capitol Hill). Look at the House of Representatives with respect to the military and the budget,” Kerry said.

“All of those things diminish our ability to do things,” he added.

Those… and the people who are in charge. Hence: defensive mode – activate:

Kerry took particular aim at critics of his efforts to get the Syrian government and the opposition that has sought to oust Syrian President Bashar al-Assad for nearly a year to reach a peace agreement that would entail Assad’s departure.

A second round of peace talks in Geneva broke up on Saturday, with chief mediator Lakhdar Brahimi lamenting a failure to achieve much beyond agreement on an agenda for a third round.

“These people who say that it’s failed or that it’s a waste of time … Where is their sense of history?” Kerry said.

“How many years did the Vietnam talks take? How many years did Dayton take in Bosnia-Herzegovina?” he added. “These things don’t happen in one month. I mean it’s just asinine, frankly, to be making an argument that after three weeks it’s failed.”

What is most ironic about all of the above, is that hypocrisy aside, Kerry is absolutely correct: the US is starting to act like a poor nation…  because it is, and Americans indeed “do not perceive the connection between U.S. engagement abroad and the U.S. economy, their own jobs and wider U.S. interests” because all US foreign policy reflects is the interest of a select group of uber-wealthy oligrachs whose sole interests the US congress represents… and nobody else’s. As for everything else, we can’t wait to see how Kerry handles the current Ukrainian crisis. The popcorn is prepared. 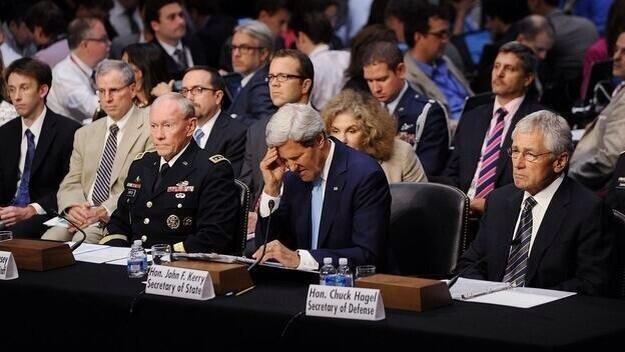