Twice in recent years, Russia has suspended gas supplies, or notably raised prices, as the somewhat well-known “trump card” of Russia’s oil and gas supply to Ukraine (and Europe for that matter) remains Putin’s easiest option for clenching his iron-first against the divided nation. Following a pre-emptive move in November by Ukraine to diversify its energy supply,  Russia had reduced the price of gas for the highly indebted Ukraine in December (to entice Ukraine under Russia’s wing); but, after recent events, Dmitry Medvedev signaled on Monday that the price could be raised again. However, today we find that Ukraine’s state oil and gas company, Naftogaz, has slashed gas imports from Russia’s Gazprom by  stunning 80% in February as Ukraine tries to show Russia it can’t be pushed around… of course, with limited (and more expensive) alternative supplies, we fear this could well shoot them in the foot.

Russia and Ukraine waged two gas wars over prices in the winters of 2006 and 2009 (which lasted 3 weeks) over a claim Ukraine was late in paying.

Ukrainian Prime Minister Mykola Azarov said that if Gazprom refuses to revise its contract, Ukraine would stop importing gas from Russia. In a step away from energy dependence on Russia, last week Ukraine signed a $10 billion shale gas deal with Chevron.

Ukraine is speeding up its effort to diversify its supply, and has looked at different exporters, fracking, new offshore projects in the Black Sea, as well as new LNG terminals and pipelines to diversify supply. Ukraine imports more than half of its gas from Russia, but under Viktor Yanukovich’s leadership, has intentionally scaled down Gazprom imports 40 percent over ‘unfair prices’.

They said Naftogaz had gradually reduced its imports from 147 million cubic meters as of February 1, but did not offer a reason for the cuts.

Prime Minister Dmitry Medvedev hinted on Monday that gas prices, reduced as part of a Russian bailout in December, may revert to higher levels.

A Gazprom official declined to comment on Naftogaz import volumes but said Russian gas transit to Europe was unaffected.

So simply put, they want to show Russia they can’t be pushed around… the trouble is, of course, that with alternative supply routes in short-supply (and only more expensive alternatives available)… 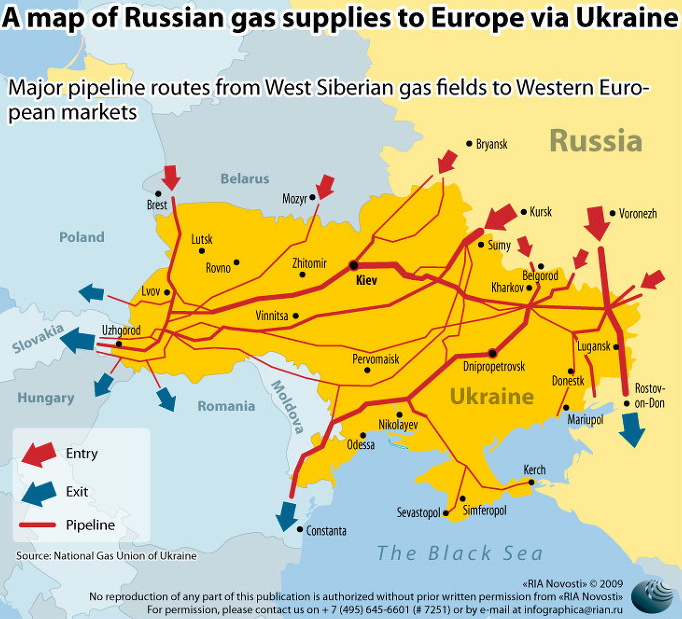 …they may well be shooting themselves in the foot. That and the whole being out of money thing too won’t help.  Finally, as everyone knows by now, Russia does have the “trump card” no matter how hard to get the Ukraine plays: