A 65-mile stretch of the Mississippi near New Orleans remained closed Monday after two vessels collided and caused an oil spill on Saturday in foggy conditions about 30 miles west of New Orleans. As NBC news reports, the Lindsay Ann Erickson crashed with the Hannah C. Settoon, which was pushing two barges carrying barrels of light crude oil that spilled into the river. Clean-up efforts are underway.

In this aerial photo, river traffic is halted along the Mississippi River between New Orleans and Vacherie, La., due to a barge leaking oil in St. James Parish, La., Sunday, Feb. 23, 2014. The collision happened Saturday afternoon near Vacherie. 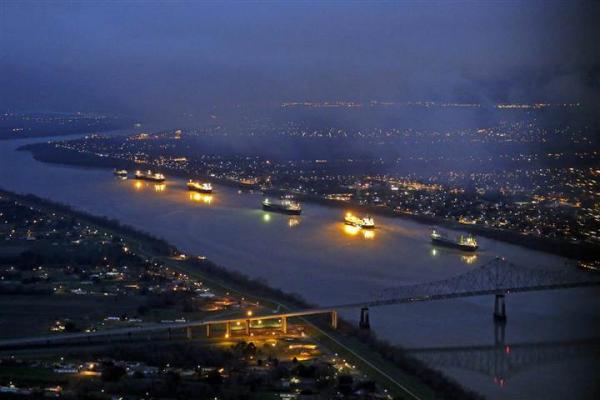 The U.S. Coast Guard said the source of an oil spill was secured but 65 miles of the Mississippi River including the Port of New Orleans remained closed Sunday.

The Coast Guard said in a news release the oil spill occurred Saturday when a barge collided with another vessel near Vacherie, between New Orleans and Baton Rouge.

“Lightering operations on the damaged barge concluded early Sunday morning and the source of the spill was secured,” the release said. “Oil spill response vessels and recovery equipment are deployed in the river.”

The Coast Guard said the Captain of the Port closed the river from mile marker 90 to mile maker 155 “to avoid possible contamination of passing vessels and to reduce the amount of oil spreading further down the river.”