Paratroopers sent into San Cristobal in the border state of Tachira and an internet blackout imposed, as residents say they are living in a ‘war zone’ 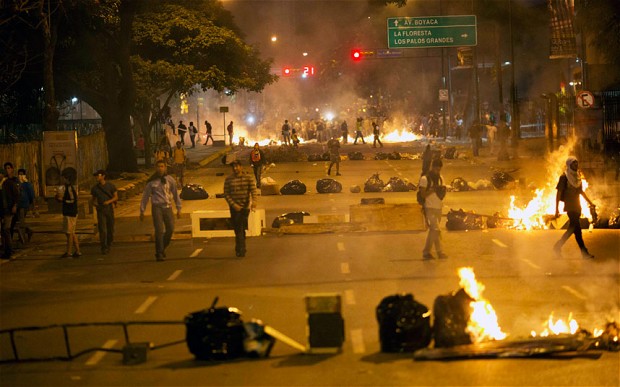 Objects placed by opposition protesters block a road in the Altamira neighborhood of Caracas, Venezuela

President Nicolas Maduro has ordered paratroopers into the restive Venezuelan border city of San Cristobal amid fierce clashes between government forces and opposition protesters, as the leftist leader warned the US to stay out of the country’s growing unrest.

The battalion was rushed in on Thursday night to “restore order” in San Cristobal, where Mr Maduro has threatened to impose martial law to quell the protests that began in the city two weeks ago and have since spread nationwide, claiming the lives of at least six people.

Venezuela, home to the world’s largest proven oil reserves, has been rocked by sometimes violent protests and rallies in the capital Caracas and other cities by government opponents angry at rampant inflation, chronic food shortages and one of the world’s highest murder rates.

While the protests are strongest in middle class areas, they have sporadically spread to poorer neighbourhoods which are traditionally aligned with the Socialist government.

In San Cristobal an internet blackout has been imposed, keeping it largely off Venezuelan screens. But residents say they are living in a “war zone”, with the town fully occupied by the army and military helicopters and planes flying overhead.

Local reporters have told of siege-like scenes with gunfire and tear gas emanating from regular street battles between protesters and security forces. Demonstrators are blocking roads with burning barricades and most business are shuttered, with few other residents venturing out from their homes. Some say they have lost electricity and running water.

The operation is being led personally by Miguel Rodriguez Torres, the country’s interior minister.

The deployment came as the government angrily rejected US calls for dialogue to resolve the protests which have further destabilised the deeply polarised nation.

Mr Maduro’s government said it “emphatically repudiates” remarks by Barack Obama, accusing the US president of “a new and crude interference in the internal affairs of our country.” The leftist leader also threatened to expel CNN from the country, claiming they were engaging in a “propaganda war” against his government.

Mr Obama had previously urged dialogue and called on Mr Maduro to release detained protesters and address the “legitimate grievances” of the Venezuelan people.

On Sunday, Mr Maduro ordered the expulsion of three US diplomats, accusing them of meeting student leaders to conspire in what the government claims is an opposition coup plot. Washington has denied the allegations.

The government has jailed Leopoldo Lopez, the opposition figure who has emerged as the hardline leader of “The Exit” protest movement – a reference to Mr Maduro’s departure from power.

It has accused him of orchestrating violence as part of a plot to overthrow the government, a claim he denies.

Both sides blame each other for the bloodshed.

The government says sharpshooters are appearing on the opposition side and radicals are seeking to create chaos by smashing property, attacking police and blocking highways.

On Friday Mr Lopez urged protesters not to give up. In a note from the military prison of Ramo Verde released through his wife, he said: “To the police, soldiers, prosecutors and judges: do not obey unjust orders, do not become the face of repression.

“To the youth, to the protesters, I ask you to stay firm against violence, and to stay organised and disciplined. This is everyone’s struggle.”

The 42-year-old Harvard-educated economist has been charged with instigating violence, property damage and criminal association – but not homicide, as had been threatened.

Henrique Capriles, the moderate opposition leader and 2013 presidential candidate who has kept a low profile during the protests, challenged Mr Maduro to prove his claims that the demonstrations were part of a conspiracy to overthrow his government.

“Is this a coup or an auto-coup?” he asked. “The only one who has talked about a coup d’etat has been the government. It is a fabrication by government actors,” he said.