The Ukrainian health minister just state that at least 64 have died since February 18th; protesters claim the number is over 100 – either way, this is horrific (and we suspect, once the Olympics is over, will get worse). As Martin Armstrong outlines below, Ukraine is the pawn on the chessboard. The propaganda war is East v West.

And Russia proclaims US/EU calls for sanctions as “Blackmail”

Russia on Thursday denounced moves by the United States and Europe to impose sanctions on Ukrainian officials following the eruption of violence in the capital, Kiev, and other cities, saying they amounted to blackmail against the government of President Viktor F. Yanukovych.

Russia’s foreign minister, Sergey V. Lavrov, also criticized a visit by the foreign ministers of France, Germany and Poland, saying the European Union had dispatched its “latest uninvited mission” to Ukraine’s capital, Kiev, to impose a solution by forcing Mr. Yanukovych to compromise.

“How can you expect that your services will be in demand when the parallel threat of sanctions makes everything very similar to blackmail?” Mr. Lavrov said in remarks during a visit to Iraq, according to Interfax.

However, those power plays are masking the core issue that began with the Orange Revolution – corruption. Armstrong warns that “Yanukovych is a dictator who will never leave office. It is simple as that. There will be no real elections again in Ukraine.” This is starting to spiral down into a confrontation that the entire world cannot ignore. 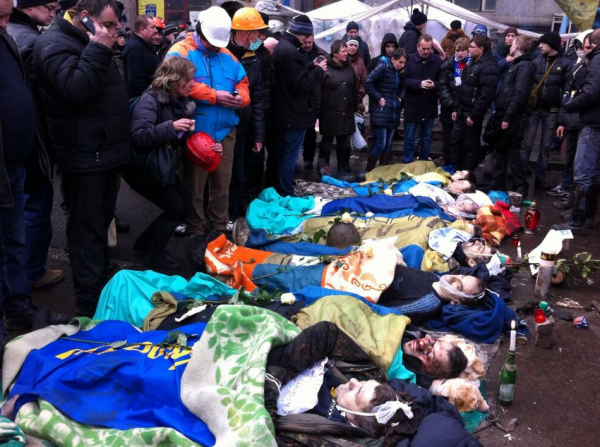 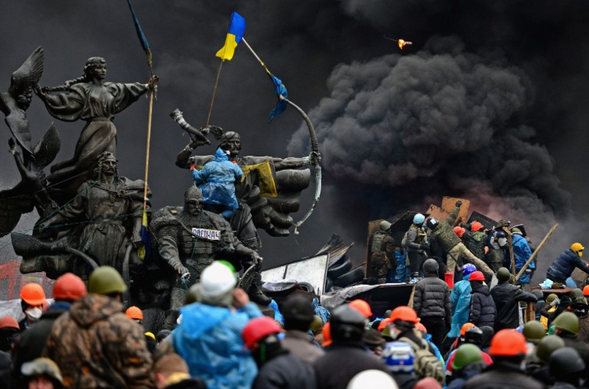 For months before the proposed alignment with the EU, there were signs all over Ukraine pro and con about joining Europe that was a campaign in part funded by the EU to sell the idea to Ukraine. This funding has been CONFUSED with the funding for the “rebels” to engage in revolution that Putin calls a coup. There is HUGE difference from the funding Germany and the EU was providing to sell Ukraine on the idea of joining the Europe compared to funding a revolution as the Saudis are doing in Syria.

But overlooked, was the resentment with corruption. After all, Ukraine’s 2004 Orange Revolution that toppled the government without a shot fired. That too was over corruption. For you see, the Orange Revolution swept then-prime minister Yanukovych out in 2004 and that brought Tymoshenko to power. It is widely viewed that Yanukovych stole his current position of power and his decision not to sign the deal  with the EU centers on the EU’s demands that he release from jail former Prime Minister Yulia Tymoshenko, his political opponent who he had imprisoned. So you are starting to get a sense of the depth to this corruption.

The changes that followed the Orange Revolution simply weren’t deep enough and Yanukovych has always been more pro-Russian. To the Western Ukrainians, this is a chance to get on a different trajectory and they did not expect this would turn violent since there was no such resistance during the Orange Revolution. On this score, they are wrong.

This resentment toward corruption has been rising sharply once again. Make no mistake about it, at the core is ALWAYS economics. Ukraine is desperately in need of a cash injection because the government is so corrupt. Yanukovych, who has been in power since 2010, and he said that Ukraine could not afford to sign the EU deal. The question was really who was putting more money is his pocket.

Germany is now starting the funding or the “rebels” as is the USA. Russia is funding the mercenaries and gave Ukraine $2 billion with demands to crush the rebels. Russia is portraying this as a coup funded by the USA. Ironically, funding is now starting. Nobody funded the “rebels” initially for had they done so,they would have been armed. The Orange Revolution was bloodless and they expected the same result so they did not seek funding for that purpose.

Of course, there was funding for “promotion” selling the EU deal to the people coming from Germany and the EU. But this was more directed into a marketing campaign that filled the cities with signs and posters. That was NOT funding that was going in with the expectation of civil war. There is a GREAT difference. Nonetheless, the violent attacks by Yanukovych’s mercenaries is now showing the West they need to fund the rebels.

The constitutional reforms that are demanded by the protesters demonstrates that this is at its core about corruption and not about joining the EU or Russia as the media is playing up. Nor are the reforms just about money. This is all about political power. This is about Yanukovych who has effectively established a de facto dictatorship. The opposition have called for the ouster of Yanukovych and the ordering of new elections for he stole the elections and imprisoned the former President who ousted him. The general view is that control of the government is a dictatorship for far too much power rests with Yanukovych and not enough with parliament. There are no checks and balances. This is the corruption that lies at the core demand – something that Yanukovych will sooner murder the entire West before ever letting go of any power. This is the core issue and why thousands of protesters have staked their lives on their desire for political change. This is NOT about joining the EU v Russia. They want HONEST government.

The very next day when protester approached his mansion, he enacted a law that it was illegal for more than 5 cars to travel together. He had his mercenaries not “killing” people but imprisoning them as hostages and others were being left in the forest stripped of all identification to die. One girl who was just helping the protesters as a nurse was seen at the train station taken by Yanukovych’s goons, and left in the forest at night to die.

BOTH the USA and EU will now fund the rebels as Russia will fund Yanukovych. At the political level, Ukraine is the pawn on the chessboard. The propaganda war is East v West. However, those power plays are masking the core issue that began with the Orange Revolution – corruption. Yanukovych is a dictator who will NEVER leave office. It is simple as that. There will be no REAL elections again in Ukraine. This is starting to spiral down into a confrontation that the entire world cannot ignore.

So does sniper-fire at your own civilian population cross Obama’s red line?