– What I Saw When I Crashed A Wall Street Secret Society: One-Percent Jokes And Plutocrats In Drag

… needs to get more coverage. 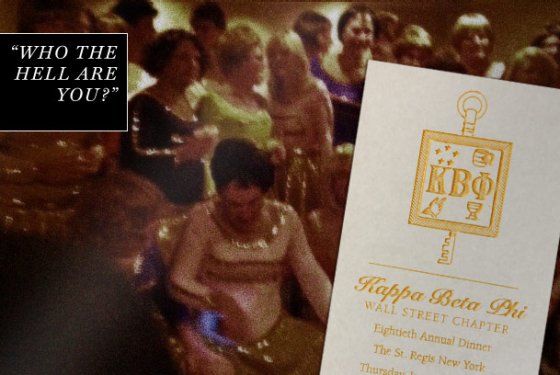 As we initially exposed over five years ago, with luminary frat brothers and sister such as Jimmy Cayne, Richard Fuld, Stan O’Neil, Martin Gruss, Michael Bloomberg, Jon Corzine, Mary Shapiro, Alan Schwartz, Larry Fink, Larry Fink, Wilbur Ross, James McDonald, this “secret” organization puts the Masons, Bilderbergs, Skull and Bones, Templars, Fight Club and all other secret societies to shame. Now, as New York Magazine infiltrates the inner workings of the “Kappa Beta Phi” society, Liberty Blitzkrieg’s Mike Krieger notes the following will confirm what everyone already thought – that a great many of these oligarch financiers are complete and total sociopaths and a menace to society.

I can still remember
How the Dow Jones used to make me smile.
And I learned my trade and had my chance
The music played I did my dance
And I made seven figures for a while.
I can’t remember if I cried
when they pulled the plug on Countrywide…
It sucks that Iceland is out of ice….
Bye, Bye to my piece of the pie…
Now I travel coach whenever I fly…
Maybe this will be the day that I die. 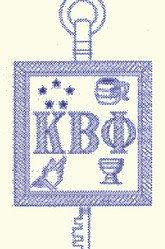 Before we get into this post, let’s review the definition of Antisocial Personality Disorder according to the U.S. National Library of Medicine:

Antisocial Personality Disorder:  A mental health condition in which a person has a long-term pattern of manipulating, exploiting, or violating the rights of others. This behavior is often criminal.

Now for the symptoms:

A person with antisocial personality disorder may:

Behavioral treatments, such as those that reward appropriate behavior and have negative consequences for illegal behavior, may hold the most promise. Certain forms of talk therapy are also being explored.

Exactly as many of us have said. Jail time and accountability are necessary to stop these people. Bailouts will only encourage continued sociopathic behavior, which is exactly what we have seen. Think about the above as you read the post below. Enjoy…

The following article by Kevin Roose was published late last night by New York Magazine, and it recounts what the journalist saw when he crashed Wall Street fraternity Kappa Beta Phi’s private party back in 2012. Some elements of his experience were already published a couple years back in a New York Times piece, but his latest article adds an additional perspective and recounts many outrageous aspects of the event I had never read before. This article is particularly important considering the recent trend of billionaires running around on financial television claiming they are being prosecuted for no reason.

Basically, it will confirm what everyone already thought. That a great many of these oligarch financiers are complete and total sociopaths and a menace to society.

Recently, our nation’s financial chieftains have been feeling a little unloved. Venture capitalists are comparing the persecution of the rich to the plight ofJews at Kristallnacht, Wall Street titans are saying that they’re sick of being beaten up, and this week, a billionaire investor, Wilbur Ross, proclaimed that “the 1 percent is being picked on for political reasons.”

Ross’s statement seemed particularly odd, because two years ago, I met Ross at an event that might single-handedly explain why the rest of the country still hates financial tycoons – the annual black-tie induction ceremony of a secret Wall Street fraternity called Kappa Beta Phi.

It was January 2012, and Ross, wearing a tuxedo and purple velvet moccasins embroidered with the fraternity’s Greek letters, was standing at the dais of the St. Regis Hotel ballroom, welcoming a crowd of two hundred wealthy and famous Wall Street figures to the Kappa Beta Phi dinner. Ross, the leader (or “Grand Swipe”) of the fraternity, was preparing to invite 21 new members — “neophytes,” as the group called them — to join its exclusive ranks.

Yeah Ross, what’s not to love about a guy like you.

Looking up at him from an elegant dinner of rack of lamb and foie gras were many of the most famous investors in the world, including executives from nearly every too-big-to-fail bank, private equity megafirm, and major hedge fund. AIG CEO Bob Benmosche was there, as were Wall Street superlawyer Marty Lipton and Alan “Ace” Greenberg, the former chairman of Bear Stearns. And those were just the returning members. Among the neophytes were hedge fund billionaire and major Obama donor Marc Lasry and Joe Reece, a high-ranking dealmaker at Credit Suisse. All told, enough wealth and power was concentrated in the St. Regis that night that if you had dropped a bomb on the roof, global finance as we know it might have ceased to exist.

If you recall, last year Mr. Benmosche compared anger at Wall Street bonuses to the lynching of black people in the south.

After cocktail hour, the new inductees – all of whom were required to dress in leotards and gold-sequined skirts, with costume wigs – began their variety-show acts. Among the night’s lowlights:

• Warren Stephens, an investment banking CEO, took the stage in a Confederate flag hat and sang a song about the financial crisis, set to the tune of “Dixie.” (“In Wall Street land we’ll take our stand, said Morgan and Goldman. But first we better get some loans, so quick, get to the Fed, man.”)

The neophytes – who had changed from their drag outfits into Mormon missionary costumes — broke into their musical finale: a parody version of “I Believe,” the hit ballad from The Book of Mormon, with customized lyrics like “I believe that God has a plan for all of us. I believe my plan involves a seven-figure bonus.” Amused, I pulled out my phone, and began recording the proceedings on video. Wrong move.

“Give me that or I’ll fucking break it!” Novogratz yelled, grabbing for my phone, which was filled with damning evidence. His eyes were bloodshot, and his neck veins were bulging. The song onstage was now over, and a number of prominent Kappas had rushed over to our table. Before the situation could escalate dangerously, a bond investor and former Grand Swipe named Alexandra Lebenthal stepped in between us. Wilbur Ross quickly followed, and the two of them led me out into the lobby, past a throng of Wall Street tycoons, some of whom seemed to be hyperventilating.

Once we made it to the lobby, Ross and Lebenthal reassured me that what I’d just seen wasn’t really a group of wealthy and powerful financiers making homophobic jokes, making light of the financial crisis, and bragging about their business conquests at Main Street’s expense. No, it was just a group of friends who came together to roast each other in a benign and self-deprecating manner. Nothing to see here.

But the extent of their worry wasn’t made clear until Ross offered himself up as a source for future stories in exchange for my cooperation.

“I’ll pick up the phone anytime, get you any help you need,” he said.

“Yeah, the people in this group could be very helpful,” Lebenthal chimed in. “If you could just keep their privacy in mind.”

This is how these guys talk to everyone, particularly Congress. They are used to getting anything they want because of their money.

The first and most obvious conclusion was that the upper ranks of finance are composed of people who have completely divorced themselves from reality. No self-aware and socially conscious Wall Street executive would have agreed to be part of a group whose tacit mission is to make light of the financial sector’s foibles. Not when those foibles had resulted in real harm to millions of people in the form of foreclosures, wrecked 401(k)s, and a devastating unemployment crisis.

The second thing I realized was that Kappa Beta Phi was, in large part, a fear-based organization. Here were executives who had strong ideas about politics, society, and the work of their colleagues, but who would never have the courage to voice those opinions in a public setting. Their cowardice had reduced them to sniping at their perceived enemies in the form of satirical songs and sketches, among only those people who had been handpicked to share their view of the world. And the idea of a reporter making those views public had caused them to throw a mass temper tantrum.

Full article here, and I highly suggest reading it as it includes some creepy audio from this oligarch frat party.