Actually, two curious findings: the first was that the disclosed Assets Under Management as of December 31, 2013 rose to a record $11.8 billion (this excludes netting and margin, and whatever one-time positions Soros may have gotten an SEC exemption to not disclose: for a recent instance of this, see Greenlight Capital’s Micron fiasco, and the subsequent lawsuit of Seeking Alpha which led to the breach of David Einhorn’s holdings confidentiality).

The second one is that the “Soros put”, a legacy hedge position that the 83-year old has been rolling over every quarter since 2010, just rose to a record $1.3 billion or the notional equivalent of some 7.09 million SPY-equivalent shares. Since this was an increase of 154% Q/Q this has some people concerned that the author of ‘reflexivity’ and the founder of “open societies” may be anticipating some major market downside.

Then again, as the chart below shows, as a percentage of total AUM, the put position rose to 11.1% of his notional holdings. By way of reference, as of June 30 2013, his SPY put may have had a smaller notional value, but it represented both more shares (7.8 million), and was far greater as a % of AUM, at 13.5%. 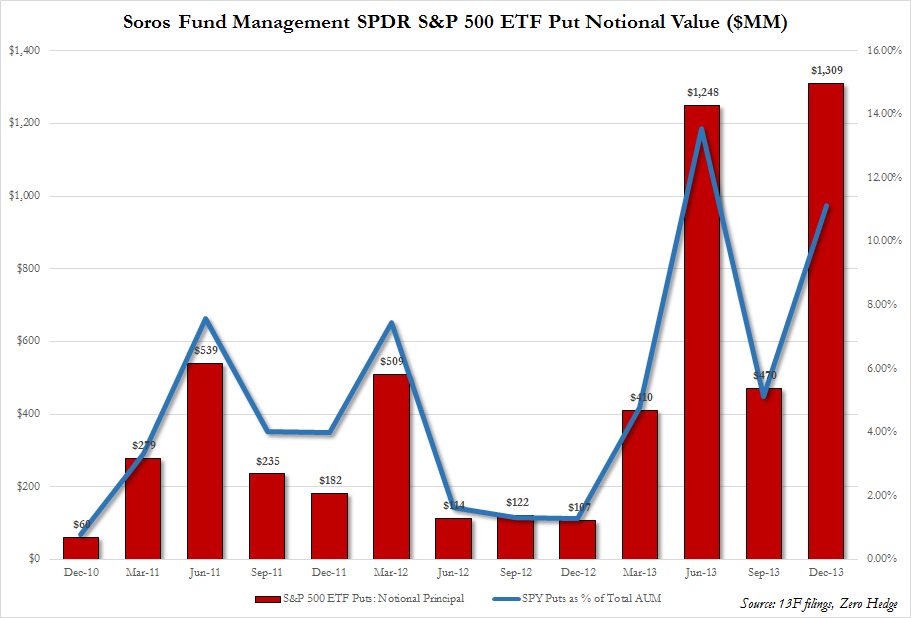 Finally, remember that what was disclosed on Friday is a snapshot of Soros’ holdings as of 45 days ago. What he may or may not have done with his hedge since then is largely unknown, and since there are no investor letters, there is no way of knowing even on a leaked basis how the billionaire has since positioned for the market.

That said, while the SPY puts are most likely simply a hedge to his overall bullish exposure, perhaps more notable was the $25 million call position that Soros put on the gold miners ETF which has been beaten into oblivion over the past year, in the fourth quarter. Does Soros think that it is finally the miners’ turn to shine?