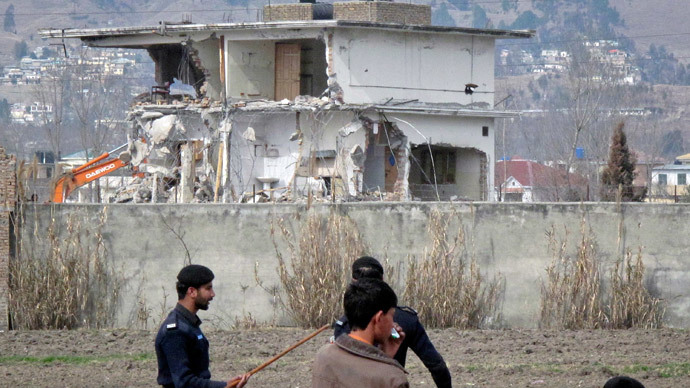 Policemen and residents stand near while demolition work is carried out on the building where al Qaeda leader Osama bin Laden was killed by U.S. special forces in Abbottabad

Eleven days after the 2011 US elite forces raid that resulted in the killing of Al-Qaeda leader Osama Bin Laden, the head of US special operations ordered the destruction of all photos of the corpse or for them to be given to the CIA, new evidence shows.

The disclosure was revealed Monday in an email obtained and released by non-profit legal group Judicial Watch via a Freedom of Information Act (FOIA) request. The heavily-redacted email was sent by Admiral William McRaven, head of US Special Operations Command, to subordinate officers on May 13, 2011, instructing them that any remaining photos of Bin Laden’s body must be destroyed or handed over to the CIA. Bin Laden was killed on May 2, 2011 at his compound in Abbottabad, Pakistan, by the special operations team commonly known as Seal Team Six during Operation Neptune Spear.

In the email, addressed to “Gentlemen,” McRaven wrote, “One particular item that I want to emphasize is photos; particularly UBLs [Usama Bin Laden, as US military referred to him] remains. At this point – all photos should have been turned over to the CIA; if you still have them destroy them immediately or get them to the [redacted].”

The order to purge the photos came 11 days after the conservative government transparency organization Judicial Watch filed a FOIA request with the Defense Department seeking “all photographs and/or video recordings of Usama Bin Laden taken during and/or after the U.S. military operation in Pakistan on or about May 1, 2011.”

Judicial Watch finally accessed the McRaven email as a result of a June 7, 2013 FOIA request and a subsequent lawsuit against the Defense Department that sought the materials.

The group notes that the first time McRaven’s order was mentioned came during a 2011 draft report by the Pentagon’s inspector general focusing on any special treatment afforded to filmmakers working on “Zero Dark Thirty,” the award-winning 2012 film about the hunt for bin Laden after the September 11, 2001 attacks. No mention of the order was made in the inspector general’s final report.

Judicial Watch eventually filed FOIA lawsuits against both the Defense Department and the CIA, arguing that federal law prohibits the “concealment, removal, or mutilation generally” of government records.

The group’s efforts to compel any photos or documents related to Bin Laden’s death failed in both a district court and an appeals court after the US government argued that the photos must remain secret. A subsequent request for review was denied by the Supreme Court. During the litigation, the Pentagon maintained it had “no records responsive to plaintiff’s request.”

The Pentagon’s office of general counsel responded to Judicial Watch’s request for the purge order records in a Jan.uary 31, 2014 letter, stating it was only able to locate one document, the heavily-blacked-out McRaven email.

“The McRaven ‘destroy them immediately’ email is a smoking gun, revealing both contempt for the rule of law and the American’s people right to know,” Judicial Watch President Tom Fitton said in a statement. “The Obama administration has tried to cover this scandal up – and our lawsuit exposed it. We demand further investigation of the effort to destroy documents about the bin Laden raid.”

The Associated Press notes that on May 3, 2011, one day after Judicial Watch’s FOIA request, it filed its own query with the Special Operations Command’s Freedom of Information/Privacy Act Division in search of “copies of all e-mails sent from and to the US government account or accounts” of McRaven referencing the Al-Qaeda leader. AP received a response the following day, noting its request had been assigned for processing. However, AP never received a copy of the email obtained by Judicial Watch.

If you (still) believe the official story, I’ve got a bridge to sell to you.